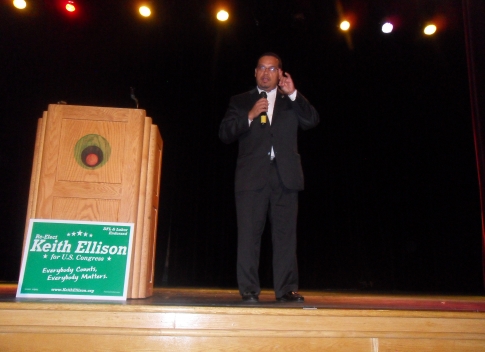 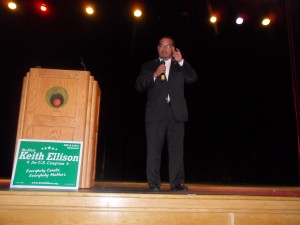 Minnesota Congressman Keith Ellison last night exhorted the African immigrant community in Minnesota to vote against the voter ID law and gay marriage ban that will be in the November 6 ballot. Mr. Ellison was speaking last night to a group of Africans at Sabathani Community Center in Minneapolis during what was dubbed as a community dialogue with leaders and members of the community.

African immigrants from more than eight countries were represented at the meeting.

The two controversial constitutional amendments have split the Minnesota electorate down the middle but the gay marriage ban is believed to enjoy wide support within the African immigrant community while most are expected to vote against the voter ID law. The congressman acknowledged the sensitivity of the gay marriage issue within the community when he prefaced his remarks on the matter with “I know some of you are going to get mad at me but I am going to ask you to also vote no on the other amendment (gay marriage ban)”.

Ms. Melissa Nambangi and Mr. Wynfred Russell, moderators for the event both expressed gratitude to the congressman for his willingness to begin such a dialogue with Africans in Minnesota, noting that such an outreach is useful and urgent.

In keeping with the African heritage of music and dance, the occasion started with performances from two choral groups, and one masquerade (juju) dance from Cameroon.

Congressman Keith Ellison first joined the masqueraders in their frantic juju dance before opening up the discussion.

Accompanying Congressman Ellison, were two members of his team (a representative of the Democratic Farmers Labor party and Brian Barnes, candidate for congress for the Minnesota third congressional District). Both speakers expounded on how African immigrants contribute to the development of American democracy.

Brian Barnes on his part was very instructive in explaining the role voters can play in making the upcoming elections rewarding. Mr. Barnes spoke on voter eligibility and Same Day Voter registration. Commenting on the recent voter ID law, he said that the law was repugnant to people’s right to vote and so it should be rejected by the voters. He urged every voter to vote “No” to the voter ID law because it disenfranchises minorities and is a waste of federal funds.

At 7pm, Congressman Ellison was invited to the discussion and he began by situating African immigrants in the democratic process of America. He said the New African Immigrants were a logical extension of the African American trajectory in America and so they must take their place in American politics.

Ken Forbin is a Mshale contributing writer based in the Twin Cities.