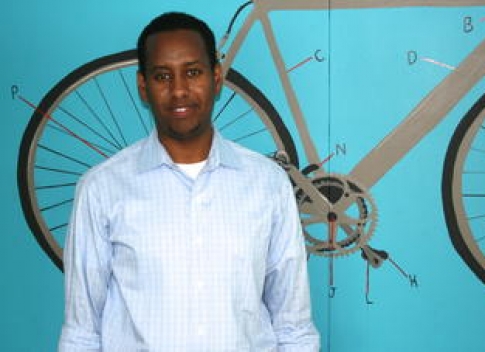 Until Abdiasis (Abdi) Hirsi was hired as community outreach coordinator for SPOKES Bike Walk Connect last August, he had never ridden a bicycle. These days Hirsi’s work involves teaching other East African residents of Minneapolis’s Seward, Cedar-Riverside, and Phillips neighborhoods that biking is a healthy, safe, and enjoyable alternative mode of transportation. This is important because the Twin Cities metro area is home to the largest population of East African refugees and immigrants in the United States. Born in Mogadishu, Hirsi and his family fled Somalia during its civil war in 1991. They arrived in the United States (and Minneapolis) from Nairobi, Kenya in 2005. Before accepting the position at SPOKES, Hirsi had served on the board of directors at Seward Towers, where he has been a resident since 2007. Hirsi says he is “blessed with a very peaceful and quiet place to live,” and enjoys giving back to the community. He also works as an associate educator for Minneapolis Adult Education.

Is it true that bicycling is something new to you?

I had tried to ride a bike when I was in grade school, back in Somalia, but without much success. When I was hired by SPOKES I took an adult learn-to-ride class from Cycles for Change. After three or four sessions I was able to ride. I’m not a winter biker yet though.

If you weren’t a bicyclist, what drew you to this job?

I graduated from the University of Minnesota with a BA in English last May. English is not the most practical degree, so I was looking for a job. One day I was speaking with Nasra Noor (community organizer at Seward Towers) who told me that Sheldon Mains (SPOKES director) was looking for someone to fill a community outreach position. Sheldon emailed me the job description. I applied, was invited for an interview, and then was hired.

What do you do as community outreach coordinator?

A lot of my work is with East African adults, who want to learn to ride a bike. Younger East Africans are already biking, so I’m doing outreach to their parents. That’s the target group. I educate them about the value of biking for their health, and teach them that bicycling is a legitimate alternative form of transportation.

Is the idea and experience of getting around by bike new to most people you work with?

Yes, back home, most of us walked everywhere. Either that, or we took the bus. Owning a car was too expensive for most people. Once they arrive here, everyone is driving, and they want bigger cars or mini-vans that will accommodate large families. We need to show them that it’s safe to bike, and not just in the summer, but winter, too. We also want to help them realize that bicycling is a form of transportation, not just something that people do occasionally for recreation.

Why was biking not an option in Somalia?

It was an option for people living in farming communities. For them it was often the best way to get from their farm into town. But there was no infrastructure for bicycling in the cities.

Why is SPOKES’ work important?

I like seeing people wake up to the fact that they can’t remain healthy if they’re not getting exercise. SPOKES provides them with opportunities to explore walking and biking as healthier and safe transportation options. We’ve started dialogues with East African residents and provided a number of activities for community members to participate in. Now that winter is here we’ll be offering winter safe walking classes.

What are some other programs and classes SPOKES offers?

We have bicycle maintenance classes, four-week classes that cover different topics. I’m participating as a student. In September we had community rides, where we would bike as a group to a different destination each week. Andrew Magill (lead trainer/mechanic), was along in case people ran into problems with their bikes. The adult learn-to-ride classes are very popular. We also have open shops days for people who need to fix their bike but don’t know how, or don’t have the tools. Other new programs will start this winter and in the spring.

What would you say is your biggest challenge at SPOKES?

Continually identifying ways to promote bicycling. Can we convince people that a bicycle can be a transportation tool comparable to a car? That’s still a challenge. We want to emphasize the recreational aspect first and then convince people to use their bike for transportation. All of this begins with people like me practicing what we preach.

How do you get the word out to members of the community you want to reach?

A lot of it’s through word of mouth, but I also put up flyers, and use social media to reach younger people. Informally I talk with friends and neighbors at the Towers outside of my working hours.

Are some people harder to convince about bicycling than others?

East African women are not very comfortable with the idea of biking. More than five have asked if we could find an enclosed place where they can learn how to ride. Others are fine with learning in an open space like Matthews Park.

What do you find most satisfying about your work?

I really like it when an East African community member comes to SPOKES and gets involved in the adult learn-to-ride classes and eventually gets his or her own bike. It’s satisfying to know that I’ve introduced one more person to biking. When a parent comes with their child and learns to fix their bike, that’s also a thrill. It helps fuel my passion.