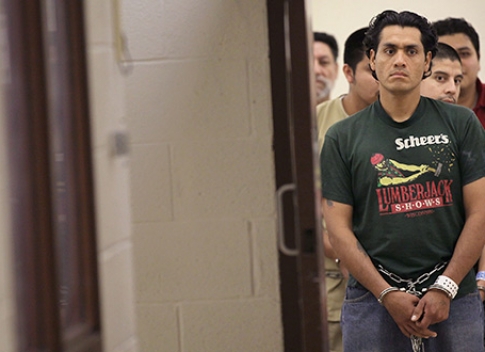 The federal government conducted more than 200,000 deportations of parents who said their children are U.S. citizens in a timespan of just over two years, according to new data obtained by Colorlines. The figures represent the longest view to date of the scale of parental deportation.

Between July 1, 2010, and Sept. 31, 2012, nearly 23 percent of all deportations—or, 204,810 deportations—were issued for parents with citizen children, according to federal data unearthed through a Freedom of Information Act request.

Because some people may have been deported more than once in the time period, the data represents total deportations conducted, not the number of individuals removed from the country. However, experts say that the total number of deportations of parents may be higher because some mothers and fathers fear telling authorities that they have kids. An additional group of parents whose kids are not U.S. citizens are not reflected in the numbers.

As Congress and the White House promise immigration reform legislation in the new year, the numbers raise questions about the impact of the government’s immigration policies on families and about what happens to the children whose mothers and fathers are deported from the United States.

“We are in a crisis situation in which we need to start taking action immediately to prevent these needless and often-times permanent separations of American children from their families,” California Rep. Lucille Roybal-Allard said in an interview with Colorlines.com. Roybal-Allard, a member of the Congressional Hispanic Caucus, introduced legislation last year that would protect detained and deported immigrant parents from losing their children.

“We have to make sure that all children are protected,” Roybal-Allard said. “We’re talking about U.S. citizens; their pleas and cries for help are pretty much being ignored at this point.”

Congress in 2009 ordered Immigration and Customs Enforcement to compile data on parental deportation beginning on July 1, 2010, and to release it every six months. Since then, however, the federal government has released the figures just once, and only for the first six months of 2011.

The new data includes all deported mothers and fathers who reported having U.S.-citizen kids since July 1, 2010, including those in the previously reported six-month period. Rates of parental deportation have remained more or less level since the government began collecting the data, and annually, more than 90,000 parents with U.S.-citizen kids are removed from the United States.

Questions remain about what happens to the children of deportees.

“We don’t know how many [children] stay here and how many go with their parents,” said Luis H. Zayas, the dean of the University of Texas School of Social Work who is at work on a federally funded study on the mental health impacts on children when mothers and fathers are deported

“We know there are traumatic effects on the kids,” Zayas added. “We are talking about separating families from children. That’s not something our government should be doing.”

Zayas said that when children follow their parents to Mexico, the country where most deportees are from, they often struggle with stigma and deep poverty. “Many of their parents fled poverty, fled government oppression and when they return, they return to these origins. That puts kids at risk.”

It’s clear, however, that a disturbing number of children are separated from their families for significant stretches of time, and some permanently. A Colorlines.com investigation released in November 2011 estimated that there were at least 5,100 children in foster care who faced significant barriers to reunifying with their detained and deported parents. We projected that if deportation and child welfare policies remained unchanged, another 15,000 kids could face a similar fate over the three years between 2012 and 2014.

Among them were the children of Felipe Montes, an undocumented Mexican immigrant who was deported from his home in North Carolina in December 2010 because he had racked up a series of driving violations. He left behind three young U.S.-citizen children and a wife, Marie Montes. The kids initially remained with their mother, but Felipe Montes had been the primary caretaker and wage earner in the family and without the support of her husband the county child welfare department soon determined that Marie Montes, who had long struggled with mental illness and drug abuse, could not care for them. The three young boys were shuttled into foster care with couples who hoped to adopt them and the child welfare department refused to reunite the kids with their father in Mexico.

Last month, after a long court battle that drew national attention, a state judge in North Carolina granted Montes custody of his three kids. The 32-year-old father expects to take them with him to Mexico after the child welfare case is closed as planned in February.

The new figures show that rates of parental deportation have remained largely level since Congress ordered ICE to begin collecting the data, quashing hopes from some advocates that the agency’s 2011 “prosecutorial discretion” guidelines would lead to a decline in these removals.

The guidelines, released on June 17, 2011, in a memo from ICE director John Morton, instructed ICE agents to focus deportation efforts on people with serious criminal convictions, those picked up crossing the border into the U.S., and those who had previously been deported from the country.

The memo also ordered agents making deportation decisions to weigh “the person’s ties and contributions to the community, including family relationships,” and “whether the person has a U.S. citizen or permanent resident spouse, child, or parent.”

In answer to questions about the parental deportation data, ICE officials told Colorlines.com the continued pace of deportations does not reflect a failure to implement prosecutorial discretion, because most deported parents have other factors weighing against them.

“Evaluation of this data in the past has repeatedly shown that the overwhelming majority of these individuals have significant criminal and/or immigration histories placing them within ICE’s enforcement priorities,” wrote agency spokesperson Gillian Christensen in an emailed statement, “therefore making them ineligible for an exercise of prosecutorial discretion.”

In April, the Arizona Republic reported over 74 percent of deported parents had been convicted of crimes, according to ICE figures. Another 13 percent had been deported previously.

But the devil is in the details. And the question for parental deportation is the same as for other groups the federal government have said are criminals: what’s considered “significant” criminal background? Figures on deportations though the Secure Communities, an ICE program that picks up immigrants in local jails, reveals that nearly 40 percent of deportees with convictions were charged with the lowest level crimes, including driving offenses.

Advocates note that regardless of whether a deported mother or father falls into one of the government’s priority groups, the impact on their kids the same. “Any deportation of a parent is a horrible thing for the child,” said Emily Butera, senior program officer at the Women’s Refugee Commission who advocates in Washington for greater protections for these families. “The reason for the deportation is immaterial for the kid.”

Officials say they’ve made strides to protect parents who fall outside of their target populations and are the primary caretakers for children.

“ICE works with individuals in removal proceedings to ensure they have ample opportunity to make important decisions regarding the care and custody of their children,” Christensen noted. “ICE is sensitive to the fact that encountering those who violate our immigration laws may impact families.”

As a sign of this, agency officials point to Felipe Montes, to whom the agency granted a rare “humanitarian parole” to reenter the country in August so that he could attend court hearings on his parental rights.

But immigration attorneys say the Montes case is a rare exception and that few, if any other deported parents have the opportunity to come back. Meanwhile, attorneys say that immigrants held in immigration detention centers continue to struggle to maintain contact with their children.

The data does show a slight decline in the number of parental deportations in the most recently reported three month period. From July until September of this year, ICE deported 20,878 parents, about 10 percent less than average. The overall deportation numbers for August to September of this year have yet to be released however, so it’s impossible to know whether this also marks a decline in the larger rate of deportation.

Concern over what happens to the children of deportees is now squarely at the center of recent advocacy and congressional promises about an immigration reform bill likely to be introduced next year. Last week, dozens of children, some whose own parents have been deported, arrived on Capitol Hill to deliver boxes of letters from other kids asking Congress to stop deporting parents. The “We Belong Together” campaign, as the effort convened by several advocacy groups is called, aims to call attention to the impact of deportations on kids.

White House officials and members of Congress have promised to push an immigration reform bill early next year, after deliberations over the “fiscal cliff” settle. Rep. Roybal-Allard, who joined a briefing with the group of children last week, told Colorlines.com that she and other members of the Congressional Hispanic Caucus are demanding that any comprehensive immigration reform bill focus on family unity. She wants the bill she introduced last year, the Help Separated Families Act, to be folded into the comprehensive immigration legislation passed by Congress. The bill would provide protections for deported parents and for undocumented family members who care for their young relatives

“There needs to be a path to citizenship for those here, and there needs to be provision to keep families together,” she said. “I’m not sure that my colleagues in general are aware of the information that you are now bringing to light.”