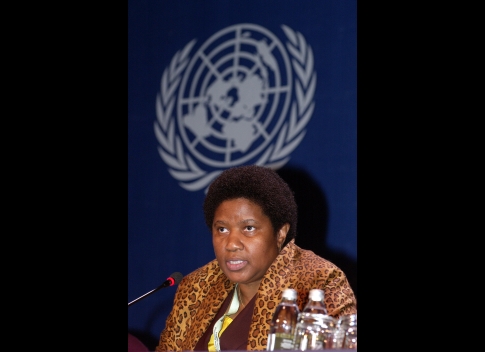 Ms. Phumzile Mlambo-Ngcuka, then South Africa’s Minister of Minerals and Energy, seen here during a press briefing on August 29 2002 at the World Summit on Sustainable Development in Johannesburg. Photo: UN News Service

United Nations Secretary-General Ban Ki-moon has appointed Phumzile Mlambo-Ngcuka, a former deputy president of South Africa and women’s advocate, as the new head of the United Nations body tasked with promoting women’s rights and their full participation in global affairs.

Ms. Mlambo-Ngcuka replaces Michelle Bachelet, a former president of Chile who served as the first Executive Director of the UN Entity for Gender Equality and Empowerment of Women (UN Women). Ms. Bachelet stepped down a few months ago.

“The Secretary-General expressed his gratitude for the outgoing Executive Director’s commitment in spearheading the Organization’s work on gender equality and the empowerment of women at the global, regional and country level,” stated the announcement of the appointment.

It went on to say that Ms. Mlambo-Ngcuka brings to her new position a wealth of experience in advocating for women’s issues “with a combination of strategic leadership, consensus building and hands-on management experience.”

She was the first woman to hold the position of Deputy President of South Africa from 2005 to 2008, and has also served as Deputy Minister in the Department of Trade and Industry, Minister of Minerals and Energy, and briefly as acting Minister of Arts, Culture, Science and Technology.

Among her many activities, Ms. Mlambo-Ngcuka established Umlambo Foundation in 2008 to provide support to schools in impoverished areas in South Africa through mentorship and coaching for teachers and in Malawi through school improvements with local partners.

UN Women was established in July 2010 by a unanimous vote of the General Assembly to oversee all of the world body’s programmes aimed at promoting women’s rights. It is tasked with helping Member States implement standards, providing technical and financial support to countries which request it, and forging partnerships with civil society.

Within the UN, it holds the world body accountable for its own commitments on gender equality.