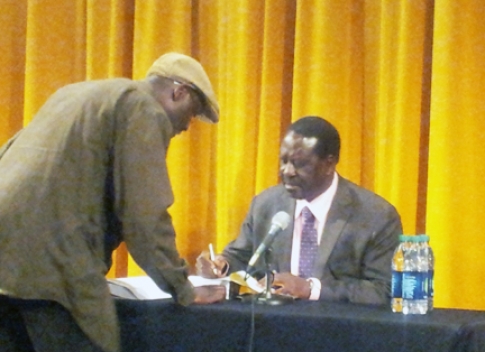 Former Prime Minister Raila Odinga of Kenya has blasted last week’s African Union resolution on the International Criminal Court (ICC) as ill-advised and unfortunate. The African Union during an extraordinary session passed a resolution, following strong lobbying by Kenya that no sitting AU Head of State shall be required to appear before the international court or tribunal during their term of office.

The AU then also advised President Uhuru Kenyatta not to honor the summons to appear before the ICC.

President Uhuru Kenyatta of Kenya and his deputy William Ruto are facing charges of crimes against humanity committed during the 2007/08 post election violence. Kenyans elected them president and deputy president this past March despite their awareness that the two faced the charges.

Mr. Odinga termed the claims by the AU that the ICC was targeting Africans as “hogwash”, saying the trials should run their course “now that we are there”. Odinga was speaking Friday (Oct. 18) during a book signing of his recently launched autobiography ‘Flame of Freedom’ at the University of Minnesota’s Humphrey School of Public Affairs.

A bemused Odinga pointed out the hypocrisy of Uganda’s Yoweri Museveni being in the forefront of speaking out against the ICC “when he is asking for help from the FBI to track down Kony (Joseph Kony) and have him taken to The Hague”.

Most of the African cases that have ended up at the ICC have been taken there by Africans themselves, Odinga said. He was not short of examples. Former Côte d’Ivoire president Laurent Gbagbo was handed over to the ICC by Ivorians, he said. “I had given Gbagbo a lifeline to avoid his final fate but he refused,” referring to his efforts as the African Union appointed mediator to end the presidential crisis in Côte d’Ivoire following elections there. Laurent Gbagbo was eventually arrested by the new government in Côte d’Ivoire and sent to the ICC.

At the heart of the AU resolution are African leaders’ claims that the ICC is targeting Africans, a point Mr. Odinga took great exception to saying “Africans have taken themselves to the ICC.” All 15 cases currently before the ICC involve Africans.

In the case of the two Kenyan leaders currently before the ICC, Odinga said Kenyans should stop having short memories. Mr. Odinga, at his most animated when addressing the ICC question from an audience member, said it is Kenyans themselves including the then parliament that rejected entreaties from him as prime minister and then president Mwai Kibaki to have a local tribunal try the cases. “These efforts by me and Kibaki were rejected by the people as they said we should go to The Hague,” he said. He added that Kenyans were given numerous chances by chief mediator Kofi Annan to set up a local tribunal but were unable to.

Odinga was accompanied by Wajir County Governor Ahmed Abdullahi and Marsabit County Governor Ukur Kanacho Yatani. Yatani is also Kenya’s former ambassador to Austria. Mr. Odinga said the two accompanied him so “they can see how devolution works in this country.”

Earlier the group had met with various Minnesota state officials from both the state executive and legislative branches including Minnesota Secretary of State Mark Ritchie. Minnesota ranks first in the United States for voter participation consistently topping over 75% voter participation. History will record Ritchie as the Secretary of State in charge when the largest and longest election recount in state history took place in 2009 during a US State Senate contest between Al Franken and Norm Coleman. Franken eventually prevailed with 312 votes after the State Supreme Court ruled in his favor 238 days after election day.

This was Mr. Odinga’s first visit to the state since losing the presidential election to Uhuru Kenyatta in March. He was last in Minnesota in September 2011 while prime minister. He cautioned against forces out to ensure devolution does not work in Kenya similar to the machinations that ensured federalism failed in the early years of independence.

Judge (ret.) LaJune Lange, president of the Minnesota based International Leadership Institute which hosted the delegation likened Odinga to his father Jaramogi Odinga, a leading light in the independence struggle. Siyad Abdullahi, a Minnesota based Kenyan-American businessman and a key member of the US National presidential Committee to elect Odinga to the presidency called on the Diaspora to be vocal as devolution in Kenya gathers steam, “we have the freedom to speak as they (government) cannot fire us”, he said.

Only a few copies of the book were available for sale at the book signing but volunteers took orders from the audience and will plan to make it available soon. A Mr. Robert Nyagudi said “an e-book will also be available soon on Amazon.”

Mr. Odinga said he tried his best to make the autobiography as “accurate as possible” and that “I will take full responsibility for any errors.” The autobiography covers his childhood growing up in the city of Kisumu and rural Siaya, he said, and up to the last presidential campaign early this year. “I have also shared my experiences during my years in detention,” he added.

The 959-page autobiography is published by Mountain Top Publishers of Nairobi.