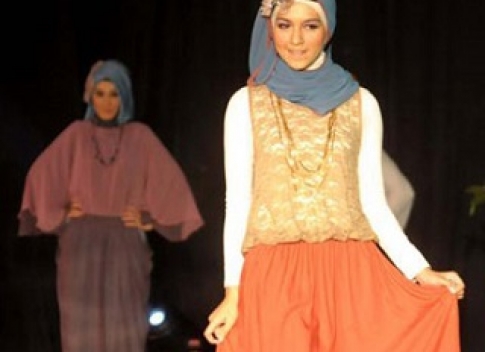 Make way on the runway America – USA Islamic Fashion Week has arrived!  Organized by the Modesty Defined Islamic Fashion Council of America, LLC (MDIFC), this lively event was hailed a success by those in attendance.

More than a year in the planning, the USA Fashion Week, held February 13-16 in the DC, at Maryland Virginia area, had an expressed goal by organizers: to  bridge the gap between modest and Islamic fashions by showcasing the distinguished designs of emerging and established Muslim women designers.

With the professionalism and polish to rival any runway show in the fashion world, young, slim models showcased chic, fashionable and Islamic inspired clothing for the American Muslimah.

Towards a fashionable Muslimah

Sarah, A young Muslim convert in attendance was amazed at the variety. She said, “I always see Muslim women dressed in one of three ways.  They either are completely uncovered and undistinguished from other Americans, draped in ill-fitting bag-lady type clothing or dressed in all black as if they are in mourning.

To be honest, it’s the number one thing that I struggle with as a new convert – the dress.  What we wear is an expression of who we are and how we feel, which is why I like the outfits with bold colors and patterns. I am shaped by my culture even as I embrace Islam so dark dull clothing is often worn by those seen as stern, mean or closed-minded.  Also, because sadness, depression, and other negative emotions are associated with black and bland colors, those outfits do not attract my attention without appropriate accessories.

I liked that to a certain extent the fashion show taught how to put things together.  I would love to own some of these pieces.  I think I would feel feminine and put together in those outfits and also relieved that what I am wearing meets religious obligations.”

Another young Muslimah who had grown up in Islam in the US marveled at the unique expressions of some of the designs. “Some of the designs really spoke to who I am as an American Muslim.” She said.  “As a teen, it seemed like the girls that covered, popularized a variation of the clothing on TV shows like ‘I-Carly’ where they wore turtle neck and long sleeved t-shirts under a short sundress or even cocktail dress and some pants.

I never liked that look and I’m way too curvaceous and endowed for that type of clothing to offer the modesty that I want to adhere to.  How refreshing to see loose, vibrant, feminine clothing that is oriented towards a young audience.  In addition, I like the idea of Americans developing our unique look – again.  When my Mom was growing up Muslim women wore long skirts, blouses, turbans and long tops over pants.  It was the way people could tell she was one of those ‘Muslims’.  But these new designs are wonderful and so very pretty.

I loved the ethnic inspired clothes, especially the colors and vibrant patterns.  My only complaints are that I didn’t see enough ‘casual’ wear or clothing for large busted women.”

Indeed, USA Fashion Week organizer, Komita Carrington, explained that models chosen to be on the runway were ‘industry’ standard size, but also included that the individual designers themselves had the option of stating whether the styles offered were available in larger sizes.

The USA Islamic Fashion Week organizers are themselves industry professionals.  MDIFC founder, Romana Kerns Muhammad has more than 28 years in the fashion industry where she did actual modeling and model coaching, development and management.

The co-founder, Komita Carrington, who was in charge of choosing the models, works with adolescent girls to develop an appreciation for modestly unique clothing.  Other committee members are Akilah Baynes who served as lead designer coordinator and is the designer and founder of Akilah Fashions, Jalila Q. Muhammad is a graduate of a Creative Fashion program in college and served as the event lead producer and designer of Qadira’s Qreations. And USA Fashion Week PR director, Aliyah Bashir, is the founder of Image Maker Public Relations company in Maryland.

Designers for the show came from all over including New York, New Jersey, Maryland, Virginia, Illinois, Texas and Canada with inquiries from designers in the Middle East and Asia.

When asked what would be the defining feature of Islamic fashions for the Muslim Woman in North America, MDIFC co-founder Komita Carrington explained that America has so many different flavors including indigenous descendants from many generations or newly arrived naturalized or first generation Americans, that the American Muslim modest attire has a range of style and expression.

But it will not be like a Muslim woman from India where the dress of Muslims and non-Muslims is similar or even parts of Africa where the clothing is practically the same.  In North America, there are different religions and the uniquely modest attire of Muslims has its own distinctiveness.

Fashions that came down the runway this week included outerwear, formal wear, bridal, abayas and ethnically inspired outfits with pants, skirts, tops, dresses, jackets and all other forms of clothing worn in the US and Canada

Future plans for MDIFC is to continue to provide a platform for emerging designers to have their work known and ultimately available to the buying public.

Indeed, many of the designers want to see their fashions available at retail stores in the nation not just Muslim clothing boutiques.  As USA Fashion Week organizers posted on their Facebook page “This first show gives us leverage to move forward in expanding the vision of creating an exclusive opportunity for the American-based Muslim Fashion Community.”   Plans are already in place for another show in September 2014 and again next year in February 2015 in the DC, Maryland, Virginia area (DMV).

Mahasin Shamsid-Deen is a World renowned author, poet and published playwright with plays performed, staged, and or read in the United States, Europe and the Middle East.