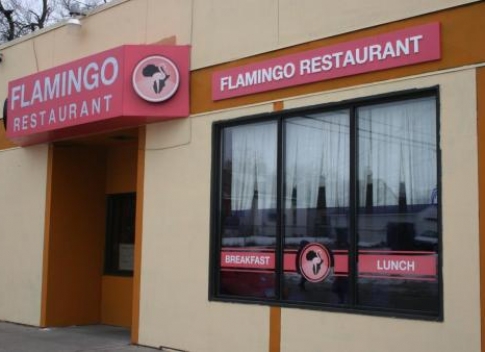 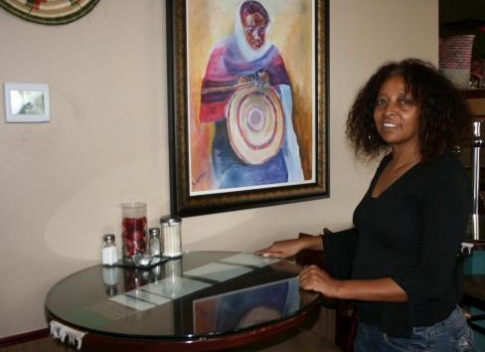 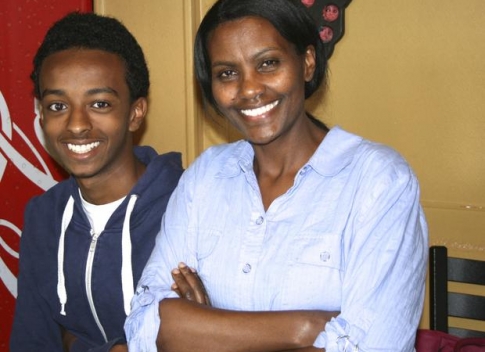 In July 2010, six months after fulfilling their dream and opening Flamingo Restaurant (located at the intersection of Syndicate Street and University Avenue in St. Paul), Shegitu Kebede and Frewoini Haile faced a huge and unexpected challenge, one that they feared might shut them down.

Kebede explains: “We have a power surge run through our restaurant. I think two or three blocks from here, something happen (an Xcel Energy transformer failed). So the power company turned off the power to fix that situation and by the time I run to my box to turn the power off, the power came on, and all that power came, and our hood…it’s huge, it’s a $75,000 hood, so that burned, icemaker, freezer, refrigerator, everything that you can imagine.” The electrical surge that overloaded the system caused large quantities of meat and produced to spoil.

Xcel Energy refused to cover repair costs, calling the power surge, “an act of God.” Kebede and Haile assumed their insurance would cover the damage, but they were wrong. They were told that their policy had no provision for electrical surges.

“We didn’t have the money to fix all this….Everything we had, we invested in the place…and so we…we were ready to close. And I remember, I was sitting at that last table, very sad. Fre was upset, closed the door and left.” That’s when Kebede turned to the Bible.

It was the appearance of a friend from home that proved a turning point. “A friend of ours, she just fly and came, and she say, ‘I don’t know what’s going on, but something pulled me to you guys….She’s in America and I told her the situation and she went home and wrote an email to every person that she knew in town.”

The friend’s email, “became a snowball. Everybody got it, the newspaper people picked it up.”

Kebede chokes up as she recalls the response from people in the community. “People were lining up on the street to get in. I mean we were packed.“ Many provided donations. “In three weeks we recovered. I mean everything was fixed. You have no idea, so our life has been a miracle.”

It was this experience that led the business partners to know that they were “home.”

“We didn’t just drop from the tree”

Both Kebede, from Ethiopia, and Haile, from Eritrea, grew up knowing nothing but war, their countries at war with each other. “That’s all we knew, there was not a peace time in our time.” Awasa, one of Ethiopia’s largest cities, located in the southern part of the country, is where Kebede spent her early years. “We are known for our lakes and hills.”

Amidst a lot of tragedy, she says she has many positive childhood memories. “We did a lot of gardening, we did a lot of knitting, crocheting, volunteering in the church and the clinics, going on fieldtrips. We went camping, a lot of camping, we did a lot of mushroom roasting and going to the lakes and camp by the lake. We traveled with the missionaries to the countryside.”

These activities helped provide a semblance of normalcy. “As little children, even though a lot of killing surround us, we were so sheltered by doing those things, we kind of didn’t even notice it’s there and so it was that kind of sheltered home that we have and that I have experienced that it helps me to balance life.”

Kebede ended up in orphanage at age five. She recalls the orphanage, which was run by Scandinavians, being, “a very loving, caring home.” However, she says that the Communist-led government shut it down because it was Christian.

At age 17, Kebede fled Ethiopia for a resettlement camp in Kenya. Then, in her early twenties, she became a refugee to the United States. Her first stop was Fargo, North Dakota. “As a refugee you don’t have a choice,” she explains. She jokes that the United Nations, which makes the decision, “didn’t know there was Florida or California.”

After less than a year in North Dakota, Kebede moved to the Twin Cities, following an Ethiopian friend she had made in Fargo. “I just didn’t want my son to be not having a playmate, so I moved, just to be with them.” She has lived in St. Paul’s Skyline Tower, Minneapolis’s Seward neighborhood, and St. Anthony Village. Now that her kids are grown and independent, she has scaled back and moved back to St. Paul.

Business partner Fre also fled her country as a teen. “Fre grew up in a very well-to-do upper-class family but they lost everything,” says Kebede. “Some family members got killed. Most of them flee the country.” Her family fractured, Haile came to the United States from Sudan.

Haile’s father was separated from the rest of the family for 10 or 11 years. “So there was a lot of scattering of the family, so then finally, the majority of her siblings are here now.” Her father, who Kebede says owned the biggest mechanic shop in the country—“his client was the King and the Royal Family”—is now in his 90s. After living in the United States for a time, he has returned to Eritrea.

Coming to the United States, she observes, requires starting over. “If you look at cab drivers in the Twin Cities, most of them have a Ph.D. It’s just that their education didn’t translate here.” This is why mentoring is so important. Having been mentored herself—especially when she began her first business, a cleaning company—Kebede makes mentoring others a priority.

“We are a country of volunteers, and there’s no way that I could not be a part of that.”

Launching one’s own business is fraught with challenges, challenges that are even steeper for women, immigrants, and people of color. As Kebede explains, “not many of us have good credit, usually a bank doesn’t approve us.”

To overcome the hurdles associated with starting a business, and to help each other through other life challenges—including buying a house or sending a child to college—many East African women have formed informal circles to raise capital that they then lend to one another. There are no strings attached, no interest to be paid.

The size of the circles vary, so might be comprised of 50, 100, or 200 women. “Each month we take turns, and whoever is in urgent situation, they can take first…We have been doing that for heaven knows how long. We do that back home, too.” The group has been together for 20 years in the U.S. It’s where the two business partners met.

Both women shared a desire to own a restaurant, but it was Haile who came with the most experience. According to Kebede, Haile had owned a restaurant, then managed one for Crowne Plaza, but lost that position as part of a massive layoff when the economy tanked.

Several months later, late one night, the owner of the property at 490 Syndicate Street phoned, and said, “’You know if you and Shegitu decide to own it by yourself, I’m willing to give it to you for this amount of money. And I don’t even need a down payment, just pay me every month.’ So that was a miracle. So me and Fre we just jumped on it and here we are.”

They have not been disappointed. “We walked the neighborhood and greeted people and let them know that we’re here. They are very welcoming and now we feel like this is the right neighborhood for us.”

A community coming together

University Avenue was not new to Kebede. When she lived in Skyline Towers—just south of University—she would shop at Sears. She purchased her first car at one of the now vacant car dealerships. She marvels over how much has changed along the Avenue since 1990, and likes that the street is experiencing a “facelift.” However, it’s not been entirely easy on Flamingo.

Construction of the light rail line was not something the business owners knew about when they scouted out locations. On top of the power surge, it created more obstacles that Kebede and Haile had to learn to navigate.

Community support has been provided in other ways. Kebede credits the U7 staff at the Neighborhood Development Center (NDC) and their City Council member and his staff, for making it a “team effort.” In her view all of the work behind the green line, “…was well thought out, well planned, and with a lot of heart.”

Kebede adds, “Sometimes you have intelligent people just doing business from the head and not the heart and that’s when the little people like us will disappear. This was the heart and the mind together. And when you have that kind of group working together you will not leave anybody behind….”

This assistance provided visibility for Flamingo and other businesses along the Corridor. “It was wonderful, they put up a billboard for us. We were on Facebook. They just did tremendous advertisement for us, so it really was very supportive. It’s like a community thing.” This makes her optimistic. “When you have that kind of community coming together, making things happen, you will know that in the end it will be a success.”

Haile calls NDC their “backbone,” providing support for all of their restaurant’s needs.

Once completed, Kebede believes the trains will be a boost to business. Like Bangkok Thai Cuisine owner, Jai Vang, she says that traveling convinces her that, “having a train makes a huge difference for a neighborhood.”

All of these experiences have led Kebede and Haile to dream about expanding, either at their current location, to a second location, or both. “Fre is even going ahead and thinking, maybe we should get another spot in Minneapolis, but we really have a dream that we’re going to expand this place.”

Haile says that one first order of business, after trains are running, may be to hold a long-delayed “grand opening.”

Flamingo’s owners would like to see their restaurant grow from a family business—currently there are around eight family members who work there—into a community business.

Having benefited from community support at home in St. Paul, Kebede explains, she and Haile want the support to continue and to ripple out near and far. This is why serving as mentors, including to students at nearby Gordon Parks High School, is so important. “We want to get into those women’s lives, woman-to-woman and show how to start a business, maybe give them a micro-loan, and so they can start their own business.” It’s a desire that carries over to Ethiopia, where Kebede has spent the first three months of 2014 starting a school in a refugee camp.

Overcoming so many challenges in such a short span of time, thanks to a supportive community, has proven that Minnesota is home. Kebede says: “We feel like we’re home. This is home….I am Minnesotan, proudly Minnesotan, yes.”

Flamingo is located at 490 N. Syndicate Street in St. Paul.

This article is part of a Central Corridor small business oral history project funded through a State of Minnesota Historical & Cultural Heritage Grant.