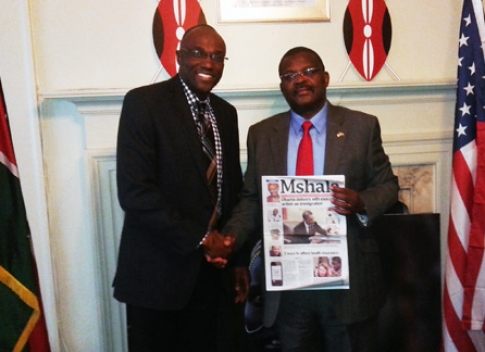 Kenya’s new ambassador to the United States, Robinson Njeru Githae, held a high level discussion with Mshale founder and publisher, Tom Gitaa, at the embassy last week. Ambassador Githae presented his letter of appointment from President Uhuru Kenyatta to US president Barack Obama last month. Mr. Gitaa was in town for meetings at the Smithsonian and Newseum. The two institutions for the first time launched an exhibit called “News for All” at the Newseum and named Mshale among “100 Most Influential Ethnic Media in America.”

In reaffirming the embassy’s commitment to serving all Kenyans in the United States, Githae noted that the Embassy/US Kenyan community relationship has deepened following recent initiatives such as the issuing of Kenyan identity cards. “There is room for improvement and we are working hard on it,” he said. Githae is a former Finance Minister in president Mwai Kibaki’s administration.

Gitaa urged the ambassador to continue building on the capacity of the embassy to serve Kenyans in a timely manner and to build ongoing relationships with them around the country. “This might need more resources than is currently allocated to the embassy,” Gitaa said, adding Githae’s predecessor Ambassador Elkanah Odembo had worked hard on the engagement aspect and it will be critical to build on it.

“How best to serve the Diaspora here in the US is very important to me and we definitely want to do what is best according to your needs,” ambassador Githae said.

Ms. Jane Miano Mugweh who is the Head Chancery at the Kenya Embassy also attended the meeting.

On the establishment of new consulates that has been in discussion for many years particularly in states with a high concentration of Kenyans, the ambassador reiterated president Kenyatta’s promise that this is in progress and “will happen.” The president while visiting the US during the White House US-Africa Summit in the summer had committed during meetings with Kenyans in Washington and Texas that more consulates will be established in places like Dallas and Minneapolis.

Gitaa advised in the case for a consulate in Minneapolis “Minnesota for sure has more Kenyans than in Chicago but the latter might make more sense for Kenya as a consulate location as it will allow for the servicing of Kenyans in Minnesota and the Upper Midwest and also address the country’s commercial interests.” He added Chicago already has other African consulates including South Africa’s and “it does not hurt that it is the home of Barack Obama.” Establishing the consulate in Chicago instead of Minnesota might not go down well with Kenyans in Minnesota “but will be the right strategic move,” Gitaa said.

Ambassador Githae and Gitaa discussed at length the ‘Kenya Diaspora Policy’ that Cabinet Secretary for Foreign Affairs and International Trade, Ambassador Amina Mohamed, launched in June 2014 with the support of the president. (The policy paper can be found here).

“That policy now informs a lot of what we do at the embassy plus some,” Ambassador Githae said. “I would appreciate your help (Gitaa) in making the policy work for the Kenyans here.”

Gitaa on his part said he is in support of much of what is contained in the policy paper and is willing to engage the Ministry in implementing it with the Kenyans in the US. “I will be happy to work with the embassy and the ministry as regards Chapter 4 of the policy paper (Institutional and Implementation Framework) which has media owned by Kenyans abroad as one of the key partners in implementing the policy.” Gitaa said he has the capacity to work with the handful of Kenyan-owned media in the US to assist the ministry in that regard “as long as it is ready to engage the Kenya-owned US media entities in the same footing and seriousness they do with Kenya based media.”

Gitaa also brought to the attention of Ambassador Githae that back in 2009 then Ambassador Peter Nicholas Rateng’ Oginga Ogego had committed the embassy to having Minnesota be the official site of Madaraka day celebrations with the ambassador in attendance. Ambassador Ogego had kept that promise and his successor Ambassador Elkanah Odembo had continued the tradition. Madaraka Day (June 1) marks the day Kenya attained internal self-rule from the British in 1963 in the run-up to full independence on December 12, 1963

Gitaa who chaired the Kenya @ 50 Committee in Minnesota in 2013 told the ambassador the Kenyans in Minnesota would like to see the tradition continued to which he responded “I don’t see a problem with that as long as everyone understands Jamhuri Day (Independence Day on December 12) will remain in Washington, DC.” He requested Gitaa to ask the current Minnesota Madaraka Day Committee to make a formal request to the embassy to that effect.

“I look forward to my first visit there (Minnesota) in June,” Ambassador Githae concluded.