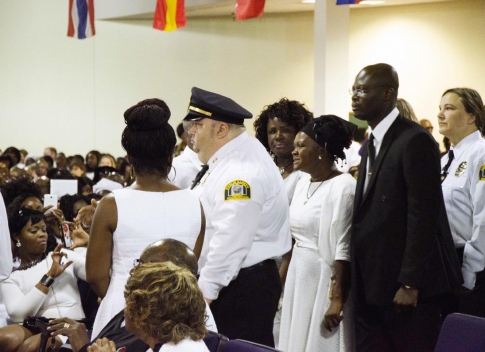 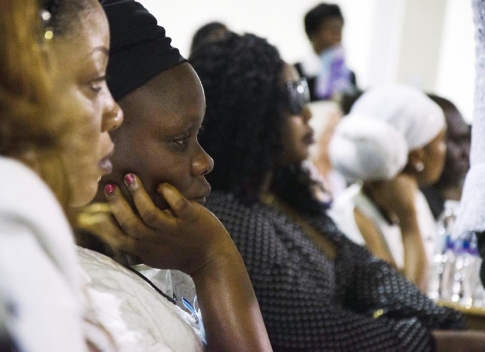 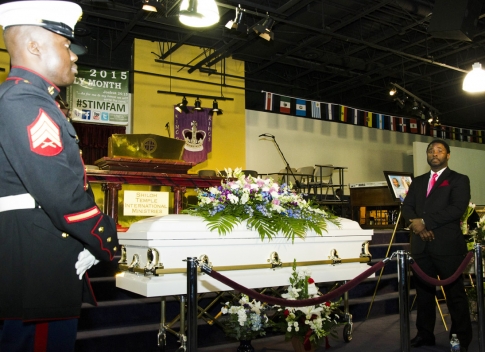 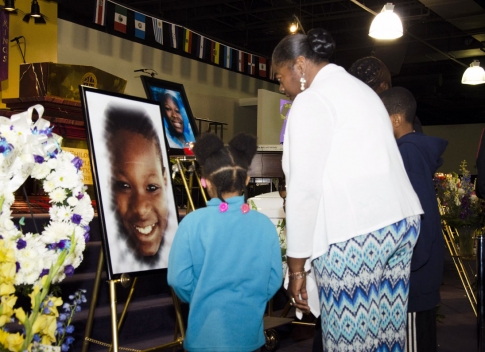 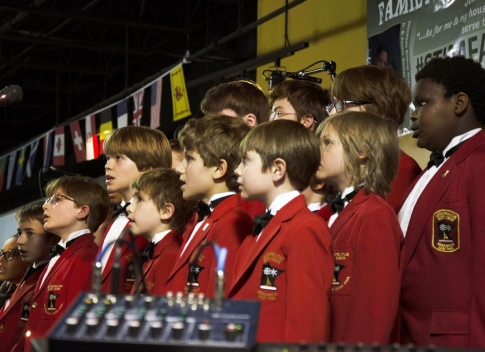 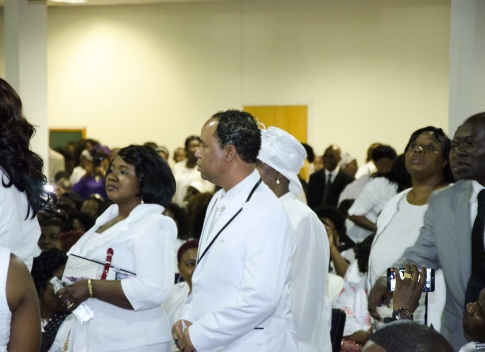 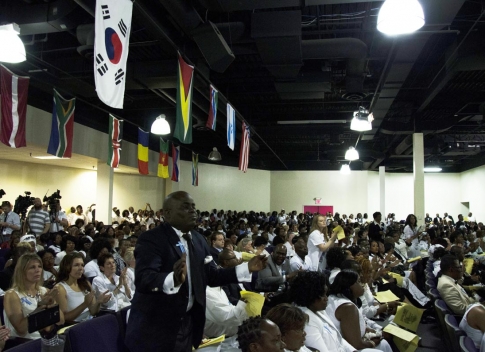 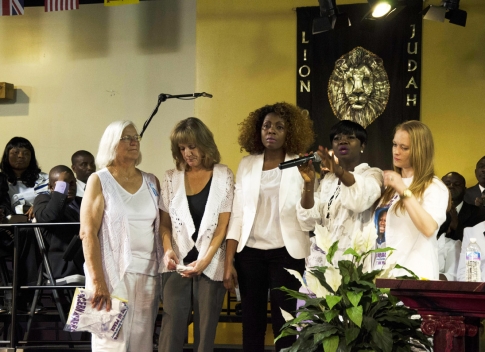 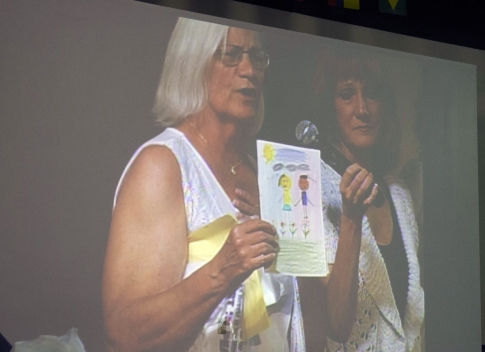 Editor’s note: This story first appeared in the Mshale print edition last week. Pick one for a more extensive photo spread of the funeral service.

MINNEAPOLIS – Well liked, kind, funny, infectious energy, these are just a few of the words used to describe 10 year old Barway Collins at his funeral service Saturday May 2, held at Shiloh Temple International Ministries. Hundreds of community members packed the church to lay him to rest leaving standing room only by the time ceremonies began; yet dozens more people continued to flow in over the next hour filling the front room and the hallways of the north Minneapolis church, as others gathered around the main hall’s doors trying to get a glimpse of the ceremonies. Outside the church, many more people stood in groups speaking and shaking hands. In this respect, Barway accomplished something few us will ever be able to do; uniting an entire community and people from all walks of life in honor of him.

It has been three weeks since Barway’s body was discovered in the Mississippi River after being reported missing on March 18. His body lay in a beautiful white casket at the front of the church, under guard, with a brief viewing at the beginning of the ceremony for family only. There was a visible police presence as well, underlining the ongoing friction over the boy’s disappearance as his father, Pierre Collins stands accused of involvement in his death. But all eyes and hearts for the day were on Barway whose face shined out from blown up photos at the front of the church, and could be seen on t-shirts and on programs throughout the crowd.

A close second in attention was his biological mother, Louise Karluah. Her presence at her son’s funeral was the result of concerted efforts by the Liberian Minnesota community and others to get her to Minnesota as quickly as possible. Karluah, who had not seen her son in 4 years, still lives in Liberia and in the face of tragedy, the community had agreed on two things: one, that Barway should have a funeral befitting of his innocence, and two, that a mother should be allowed to lay her child to rest. Through fundraising efforts led by groups within the community, enough money was raised to fly Karluah to the U.S and cover Barway’s funeral expenses.

Many of the speakers thanked the community for coming together at such a difficult time, each of them stressing the need for unity and support for Barway’s remaining family, particularly his biological mother and his step-mother: both of whom had reached out to each other in the last few days. Bishop Richard Howell Jr. in his welcoming remarks asked for everyone to “put aside our differences and fix our eyes on the smile of Barway,” before handing the ceremonies over to Pastor Harding Smith and Pastor Alexander Collins.

A succession of people involved in Barway’s life as community members, teachers, friends, family, and in the efforts to find him after he went missing all took to the podium, painting the life of a 10 year old boy who had touched many people’s hearts. Representatives from local community organizations spoke about the efforts to find Barway after he was went missing, and how the groups had grown stronger from their engagement around him, stressing the need to continue to be united and build a lasting memory for the slain boy and his mother who will be returning to Liberia at the end of her 30 day visa.

One of the speakers, a woman from the Organization for Liberia Women in Minnesota talked about how a “child sent to America is a big thing,” and all the promise that brings for many Africans for whom America represents a land of opportunity. The tragedy of Barway’s loss at such a young age, had taken from him all the possibilities of doing great things for his home country and the U.S. Cheryl Ray, principal of Evergreen Park Elementary School where Barway attended first 1st through 4th grade also spoke to the crowd on behalf of his teachers and schoolmates, some of whom were in attendance. She spoke of an illustrious boy who had once written in a take home journal, “I want to be a teacher when I’m big,” and who had “so many friends, many staff knew him, he was well known, well liked, he had this infectious energy that everybody around him noticed.” Adding, “He was kind, he was funny, and he had that big smile that everyone will remember.”

One of Barway’s friends, a young boy around 7 years old whom Barway had met when he first arrived in America was invited on stage to speak. Accompanied by his mother and sister, his eyes were downcast as his older sister took to the microphone and stated, “My brother cannot speak right now because he is depressed, (and) so I will be speaking on behalf of my mother and my brother.” In an emotional speech she talked of the friendship between the two boys and how Barway had taken care of her little brother making sure he had lunches and had done his homework after school. His loss she said, was like losing a brother.

Hennepin County Sheriff Rich Stanek who had been involved in the search to find Barway thanked the family and community for their relentless efforts to find him, “I wanted to say thank you to the moms, the friends, (and) the mothers who searched for Barway tirelessly, relentlessly. You never gave up hope. You never gave up the quest for the truth. Thank you for all your effort.” Governor Mark Dayton who was scheduled to attend the event, but could not make it sent his regrets to the family, while a representative from Senator Amy Klobuchar’s office, took to the podium letting them know that Senator Klobuchar is “a friend of the Liberian community.” The representative, Siad Ali, a Somali American, addressed the crowd as an “African brother”, assuring them that the entire African community was grieving with them.

As the ceremonies came to an end, the Collins family and the Karluah family each took to the stage separately for an emotional send off. Yamah Collins, Pierre’s wife and Barway’s step-mother appeared on stage with the Collins family but did not speak. An uncle, Telma Collins spoke on behalf of the family, saying, “Like any family you want to see a child live to his full potential. From all indications, what you have heard here today, the amount of people involved in his life for the past two months, proves that Barway was going to be a great person. It took Barway just 10 years to win the hearts of all of you, and the whole of the country and the world as well.” The uncle also urged the crowd to “pray for us,” before presenting a blanket they had made in his honor to the Karluah family.

The Karluah family took to the stage next, with Louise absent, though she could be heard wailing in the crowd over the loss of her son. Her brother, Emmanuel Monluo, spoke on behalf of the family in an impassioned speech that gave a glimpse into the family’s pain and anger over his death, “Barway was trusted to a person that was supposed to give him the maximum protection. That person has been accused. Get me very clearly, that person has been accused. But I want to tell you, the Karluah family is bleeding. We are bleeding.” He thanked everyone who had worked to bring Louise to Minnesota, noting how Barway had brought the entire African community together and thanking the community for all their work. Above all, he asked for continued support for the family and called for unity, the theme of the day, and the lasting legacy of a brilliant, smiling boy whose life ended too soon.