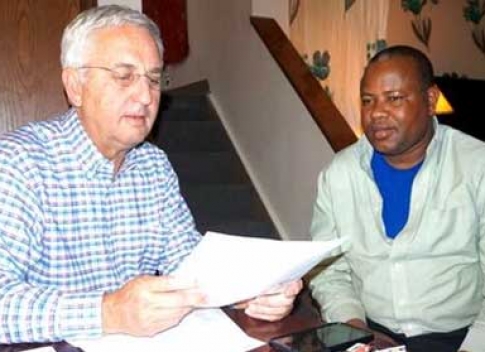 FORT WAYNE, Ind.- Since arriving in the United States in 2004, Sugow Said, a Somali refugee, has desired to become a U.S. citizen.

But the Saids, who fled Somalia’s murderous militias and famine in 1994, endured a decade in Kenyan refugee camps, and finally were resettled by the U.S. State Department to Fort Wayne in 2004, now find themselves ill, impoverished and trying to survive their latest challenge: U.S. bureaucracy.

Said and his wife, Salimo, were taking English classes at several community locations until Said developed kidney failure. He had no schooling in Somalia and cannot read or write in his own language. Learning English is extremely difficult for Said, now in his mid-60s, especially when his illness prevents him from attending community classes.

But unless he can either learn English well enough to pass the U.S. citizenship interview and tests — or get approved for a disability waiver exempting him from completing the naturalization process in English — he will not regain his only source of income – $721 a month in federal Supplemental Security Income (SSI) for low-income elders or people with disabilities that was suddenly revoked nearly a year ago.

Last September, the Social Security Administration (SSA) sent Said a letter stating, “We are writing to let you know that we have paid you $21,896.20 too much Supplemental Security Income (SSI),” due to an overpayment for the period December 2011 to June 2014. (The amount was later reduced to $19,000.)

The government granted Said his SSI in January 2011, because of his kidney failure. However, refugees and other legal alien residents who qualify for SSI due to disability lose those benefits if they do not become U.S. citizens within seven years of arrival in this county, regardless of age or disability–unless they are granted a special waiver. Neither Said nor those helping him were aware of that rule.

Said’s SSA letter continues, though, that he can request a waiver, ask for an appeal or do both. It also states he may not have to pay it back if “it wasn’t your fault that you got too much SSI money AND if paying us back would mean you can’t pay your bills for food, clothing, housing, medical care or other necessary expenses, or it would be unfair for some other reason.”

In early April, after Said had waited months for word from Social Security about his formal request to reinstate his SSI benefits, Carmen Moreno, communications director of the SSA regional office in Chicago, e-mailed this reporter, “We do not have a record of a reconsideration filed by Mr. Said.”

Yet, Said has a copy of the official reconsideration form that an American friend, local business owner Rick Maples, helped him complete. The form was date-stamped by the Fort Wayne SSA office on June 30, 2014. Moreno said in a phone interview that the average processing time for a reconsideration request is about 90 days.

Moreno also said the reason Said got SSI benefits even after the seven-year time limit was because his “alien status was entered incorrectly.” In the future, Moreno said, SSA plans to use this error on their part as a “training opportunity.”

Meanwhile, Maples, who owns a home care company and has taken the Saids under his wing, sought help from two free legal aid agencies, both based in Indianapolis. Both said they could not help; one cited insufficient staff as the reason.

Now, with Maples’ help, Said is trying to find a physician or psychologist who accepts Medicaid payments for the required testing and evaluation he needs to apply for the disability waiver from the citizenship interview and testing in English. Said cannot afford to pay for the evaluation out of pocket.

Maples said that one doctor, worried about her own immigration status, refused to fill out the form for Said, while another clinic told him that there is a one-year waiting time for Medicaid patients to get the required evaluation.

Struggling With Dialysis – and Bureaucracy

“The biggest problem I have is that I am getting dialysis now,” he said, pulling up the left sleeve of his shirt to show the bulging vascular access in his upper arm.

The artificial kidney, or dialysis machine, is connected to this access port so the toxins, waste and extra fluid collecting in his blood can be removed.

The Medicaid program, for low-income individuals, pays for his dialysis. Said takes the bus to a dialysis center six miles from his apartment.

Although there is a Medicaid-paid transportation service available, he must call a 1-800 phone number and listen to an English-recorded message instructing him on what numbers to press on the phone in order to schedule a ride.

Dialysis lasts four hours, but the process causes weakness, headaches, stomach cramps and nausea. Said is not allowed to travel immediately after, so he sits at the center for at least an hour before taking the bus home. Dialysis creates high anxiety in people able to communicate with doctors and nurses, who have money and a strong support system. That stress is compounded for Said.

In one study of patients at an urban dialysis center, Daniel Cukor and his colleagues in the Department of Psychiatry, State University of New York (SUNY) Downstate Medical Center in Brooklyn, found more than 70 percent had major depression, major anxiety disorder or other psychiatric conditions, with depression being the most pervasive.

Said recalled how he despaired last June on learning he would lose his SSI–“I cried.” He did not want Salimo or his three children to see him weep so, “I went away from here [his apartment] and cried,” he said through Haji.

He worries especially about Salimo, who has a seizure disorder and memory problems. “She puts things down, then doesn’t remember where she put them,” he said through Haji.

Salimo is also in the process of applying for SSI, and she only just qualified for the state’s low-income health insurance plan. Even though the plan exempts her from copayments for medical services, Indiana’s computer system has not updated her status and recently billed her for $12, while her neurologist’s office insisted on a $4 copayment.

The Saids’ friend, Rick Maples, paid for her. He lamented in an interview, “It takes so much work and effort when you’re poor!”

Maples also recently helped them file for Temporary Assistance to Needy Families (TANF), which is now providing $324 a month for up to 20 months for the family.

Even that small amount was in jeopardy when the state’s welfare office recently sent a letter saying he was being fined for not signing a certain form.

In a meeting with a Division of Family Resources caseworker, Said signed every paper he was asked to sign to apply for TANF, confirmed Maples, who takes Said to appointments and helps him fill out forms. After Maples intervened, the agency dropped the fine.

Staff at the dialysis center recommended Said consider a kidney transplant, but Lutheran Hospital, the only kidney transplant program in Fort Wayne, turned down Said’s application because of his income status, concerns about lack of a supportive network and his need to better understand his medical condition and medications.

In the denial letter, the hospital recommended he do fundraising through his faith community or a transplant foundation program.

A Heavy, But Hopeful Heart

Meanwhile, the worry lines on his face deepen as he waits for responses from Social Security on his request to have his SSI reinstated and for approval of the back payment waiver. His heart is heavy for his family.

Said’s three high school-age children need shoes and would like some of the things most teens want or need. They don’t have a home computer or Internet service to complete their homework. They go to the library if they can find a ride. The closest library branch is more than four miles away.

Despite a bleak outlook right now, Said is proud of his children–including the two older daughters, who grew up in refugee camps and who now live in Fort Wayne with their husbands and children. He reminds them often, “Education is the most important thing. That is the way. You have to study.”

Jennifer L. Boen, a freelance health care writer, wrote this series for the Fort Wayne News-Sentinel through a Journalists in Aging Fellowship, a collaboration of New America Media and the Gerontological Society of America, with support from AARP.