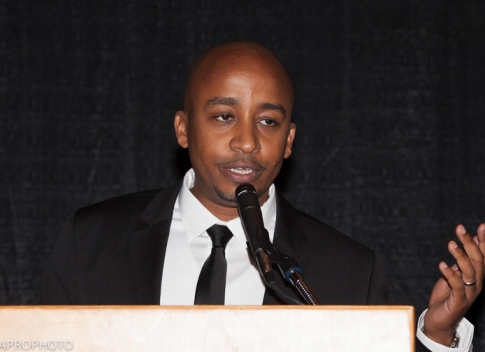 MINNEAPOLIS – Ask me to describe the African Awards in one word? Inspiring. No other word comes close to describing the atmosphere, the awards, the attendees or all the outstanding nominees for this year’s 5th Annual African Awards hosted at the Minneapolis Convention Center. This past Saturday after the votes were counted and seats numbered, About 200 people convened for a gala event celebrating the successes of African immigrants in the Diaspora. But more than a celebration of past successes, it was a glimpse into the future for Africans who now find themselves making new lives in the U.S.

Among the attendees were Africans whose birth countries spanned the continent, local African businesses and organizations, and community partners from all walks of life. The stellar ceremony opened with a generous 2 hour red carpet event that allowed attendees and nominees to get a take home souvenir showing off their Sunday best. In true African style, both attendees and nominees for the Awards were dressed to the nines, with no fabric or color left out of the menagerie. Short lines and plenty of outfits to show off meant that the red carpet photos were a hit, both before and after the Awards ceremony. Overhead, African beats rang out from the DJ’s who provided the perfect accompaniment to the celebration of all things African.

Meanwhile, Tom Gitaa, Mshale founder and organizer of the African Awards was a busy man. Dressed in a sleek black suit and accompanied by his equally well dressed fianceé, Gitaa was swamped all night shaking hands and ensuring the whole operation went smoothly. Elsewhere, judges mingled with the nominees and nominees mingled with their families, barely containing their excitement. Shortly after 7:30 pm guests were invited for the first event of the ceremonies, a fashion show by Dahil Republic of Couture’s Hilda Mauya who was freshly returned from New York City’s Fashion Week. Mauya, like many who would take to the stage later that evening, gave a nod to Gitaa who she said “Gave me my first show. He believed in me when no one else did.”

As Mauya’s clothes took to the runway, they were greeted by flashing bulbs and open smiles and nods. Mauya’s take on African fabrics was elegant, modern, and sexy, as piece after piece was strutted on the runway. While I can’t speak for anyone else in the audience, I know the one thought that rang through my head as each model walked out was, “I want that!” The audience likewise seemed to eat up Mauya’s designs before sitting down for the more ‘formal’ aspects of the gala.

If it wasn’t clear already, it became very apparent that the evening would be a celebration of the African continent and its people as the keynote speaker, David Kobia, took the stage. Kobia to say the least is a life-saver and MIT Humanitarian of the Year Awardee among a long list of accomplishments. His Ushahidi crisis-mapping platform originating in the aftermath of Kenya’s 2007 post-election violence has literally been saving lives since it launched. Whether in the aftermath of Haiti’s 2010 earthquake, Japan’s 2011 Fukushima nuclear disaster, earthquakes in Chile or floods in Australia, Kobia’s platform has been a lifeline for people trapped in the aftermath of a disaster by allowing them to map their location and needs.

Speaking with Atlanta-based Kobia before he took to the stage I asked him how he felt about being the keynote speaker for the Awards. Kobia stated, “It’s always a little pressure, but it’s great, it’s an honor to be here and just being around these folks is great.” In his address, Kobia highlighted his own journey to America and spoke to the difficulties that Africans in the diaspora face as they “struggle with a cultural duality.” He added, “I do to. Sometimes, you have to own it. Bridging multiple cultures gives us perspective and drive.” Kobia also spoke to the unique role that Africans in the diaspora must play, “It is our responsibility to dispel the myths of Africa,” while highlighting the successes of other African immigrants to the U.S such as the writers Chimamanda Ngozi Adichie and Ngugi Wa Thiong’o.

For Kobia though, Africans in the diaspora have a responsibility not only to the image of Africans in the West, but also their continent, stating, “Our engagement shouldn’t be limited to just remittances. There are problems to be solved.” Speaking to Kobia before his address he told me about his current projects noting that he was working on creating a “Silicone Savannah” that would turn Nairobi into a tech-hub. Kobia, like the African Awards, has a grand vision that tells the world that Africans are “Not just the recipients of aid. We actually develop and build stuff.” On whether he had any words of advice for young up and coming African programmers, Kobia had this to say, “It’s the right space, especially for Africans. There are more than enough problems to solve. I welcome anybody to come back to Africa and help with solving these problems.”

Following Kobia’s speech, dinner was served and then it was time for the stars of the show to shine during the awards ceremony. Godson Sowah, the judge panel chair, accompanied by the other two judges (Fatima Mohamed and Leon Rodrigues) presented all the awards to the winners, with all nominees receiving a certificate of recognition. When I asked Sowah to sum up the nominees in a few words, he had had this to say, “These are the giants on whom most people will stand on one day. These are a clear group of people that showcase that we’re going somewhere despite all the challenges Africa has.”

The giants took the stage for each of the seven award categories, delivering humbling and moving speeches to the eager crowd. The winners talked about community engagement, pride, and for some, the role of their parents and families in pushing them to their achievements. David Morse of New American Dimensions, who received the Founder’s Award talked about the market research study his company had conducted on African immigrants (the first of its kind) and the impact it had on him, “My life has been changed after these focus groups. The prognosis for the U.S is pretty good given the quality of African immigrants to the U.S.”

Eritrean Wintana Melekin who received the Spirit of the Moran Award gave thanks to her parents who “encouraged her to take risks.” Attorney Paschal Nwokocha recipient of the Business of the Year Award noted that his involvement in the community was the reason for his nomination but that he was more interested in “building capacity” among immigrants, not only through the immigration services his office provides, but also “within the law community.” Student of the Year, Charlen Nyangaresi spoke of her desire to engage the diaspora community and “going back and giving back.” Ilhan Omar, who received the Community Leadership Award, took the opportunity to announce her candidacy for District 60B which covers the West Bank, Seward, Prospect Park, Marcy Holmes, Dinkytown and Como neighborhoods. Omar, who if elected, would be the first African born woman (or man) ever to be elected to such an office noted that she was “changing the narrative of what it truly means to be American.”

As the event came to an end, there was the remarkable feeling of a community engaged in changing the world around them and challenging themselves to grow. Speaking with Sowah, the panel judge chair, after the event I asked him what the African Awards meant to him. Sowah had this to say, “Africa has a lot of unique voices and they’re very distinguished, very clear, they have this timbre to it and wherever we go you can hear us. Unfortunately that voice has gotten silenced for a very long time. Every once in a while, something comes up that allows these voices to shine, to flourish. That one example is these awards.”

Friend of the Community:  Richard Wagner

Spirit of the Moran: Wintana Melekin