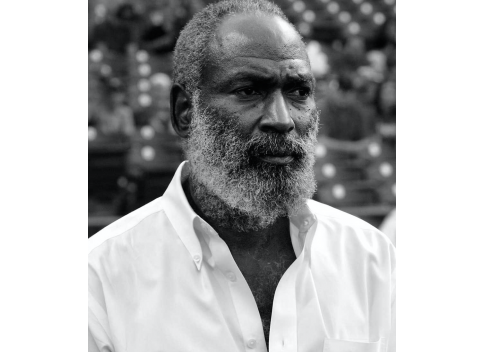 David Robinson, the son of baseball icon Jackie Robinson, will travel from his home on a coffee cooperative in Tanzania, to visit the Twin Cities Sept. 22-24 to talk about his volunteer work for St. Paul-based Books For Africa (BFA).

Robinson, who has lived in Tanzania for more than 30 years, participated earlier this year in a walk across Zanzibar, off the coast of Tanzania, led by BFA Founder Tom Warth to raise money, deliver books and help end the book famine in Africa.

After the walk, Robinson, the baseball legend’s youngest child, distributed 5,000 books to six schools near his coffee cooperative, where the more than 200 members of the cooperative live and work.

He will come to the Twin Cities as a BFA volunteer to raise money for and interest in sending books to students in rural Tanzania:

•On September 22 he will throw out the first pitch at Books For Africa Night at the Twins game vs. Detroit at Target Field.

•On September 23, Robinson will meet with officials at Thomson Reuters in Eagan, a major sponsor for Books For Africa, and attend a fundraising reception at the Minneapolis home of former U.S. Ambassador to Morocco Sam Kaplan and his wife Sylvia.

•On September 24, he will participate in a Children’s Book Walk in St. Paul and attend BFA’s Annual warehouse party.

His schedule for Books for Africa is available on the BFA website.

Robinson will also be meeting with local coffee roasters and distributors. He directs a cooperative of 200 small coffee farmers which sells coffee in the U.S. He has also been instrumental in building the Bara Village Multimedia Education, Training and Entertainment Center. It is an educational center for over 2,000 primary and secondary students and training center for farmers, women’s groups and youth organizations.

Major League baseball has donated the film projector for the 150-seat theater in the center, where feature films and cartoons will be shown for adults and kids.

Robinson said he is honored to be able to visit Minnesota on behalf of Books For Africa. He said books are the key to providing education for the children of Africa.

Patrick Plonski, executive director of Books For Africa, said he was “thrilled that David Robinson would come all the way to the Twin Cities to help support BFA and the children of Africa. I understand that it will take longer for him to go from the coffee co-op over back roads to the airport than it will take for the flight to the U.S. So we’re grateful that he is making the effort.”

Books For Africa is the largest shipper of text and library books to the African continent. It has shipped more than 35 million books to 49 countries since 1988.

Spike Lee did a video for ESPN about David Robinson that can be viewed here.