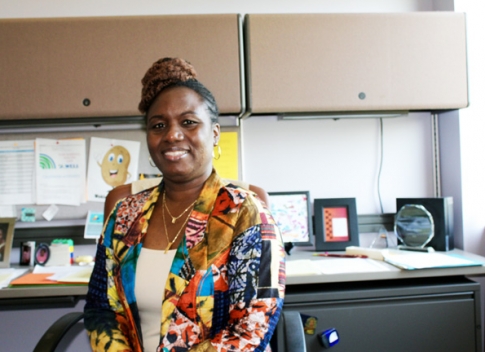 After leaving her native Liberia as a teenager during the start of the civil war in 1990, Wokie Freeman and her family moved to the city of Brooklyn Park in Minnesota. She attended high school in the city then went on to the University of Minnesota to study chemistry. In her adult life Freeman decided to return to Brooklyn Park where she would eventually purchase a home.

This year the city made a bold move after it hired Freeman as its Assistant City Manager making making her the first Liberian-American to hold the position. The city is home to many African immigrants with Liberian-Americans clearly the majority among the Africans. Current City of Brooklyn Center City Manager Curt Boganey was the last person of color to occupy one of the two top executive positions in the Brooklyn Park when he was City Manager. It is a significant development in Brooklyn Park, which census data now shows minorities comprise the majority in the city. Its City Council however remains all white. The city came close to electing its first minority council member in 2012 during a special election when Liberian-born Wynfred Russell lost by five votes in the city’s West District.

The low number of minority executives in city government nationally has been documented in various studies that look at disparities. With many city councils having no significant minority members, which in turn is also reflected in top city jobs such as the one Freeman now occupies. A recent New York Times study for example pointed out that according to the International City/County Management Association, among 340 American cities where more than 20 percent of the population is black, two had councils on which blacks were overrepresented compared with their population; 209 were within one seat of their population; and 129 underrepresented blacks by more than one seat.

The responsibilities of the Assistant City Manager varies by city but the significance of the position is to serve the city’s constituents by working to support and implement the city manager’s initiatives as directed by the City Council. In the absence of the city manager the assistant becomes the acting city manager that answers to the city council, board, and the mayor.

Ms. Freeman spends a typical day at the office meeting with departments and senior management to analyze and discuss various initiatives. To help set the city’s goals in accordance to the population’s needs the city gathers data, one of the key functions Freeman works on.

Recent data has helped the city of Brooklyn Park formulate goals for the year 2025. The data so far collected indicate the city residents hope to see more economic opportunities and investments as well as living wage jobs coming to the city. The city hopes to use its resources to bridge the education opportunity gap. The inhabitants of Brooklyn Park would love to create a destination center for the city one that acts as a symbol of Brooklyn Park. The residents would like to see more restaurants that reflect the city’s diversity as well as an events center that showcases diversity in the arts and music.

Just how diverse is Brooklyn Park? This city is home to 78,000 residents and is Minnesota’s sixth largest city. One in four residents born outside of the United States. Brooklyn Park has seen a lot of changes in its one hundred and sixty six year history. The changes can be seen in the infrastructure and demographics through the years. Many African immigrants call the city home with Liberians being the largest among the Africans.

The city also faces challenges with disparities in regards to economic, social, health, and educational opportunities amongst its community members. These are gaps that Wokie Freeman hopes to bridge.

Freeman also works to influence change in order to better serve and meet the needs of the city’s residents. Before becoming the new assistant city manager she served on the city’s core planning team and was apart of their community engagement initiative. With a science and strong business background working with the University of Minnesota Ms. Freeman states that she did not take the traditional route to obtaining her role.

Her work at University of Minnesota Robert J. Jones Urban Research and Outreach-Engagement Center (UROC) in Minneapolis where she was assistant executive director and director of operations and programs seems to have prepared her for her new executive position in Brooklyn Park. At UROC, she was one of the first employees there. UROC is one of the few research centers in the country specifically seeking solutions to urban challenges.

Heidi Barajas, UROC’s executive director and Freeman’s boss at the time, in her farewell message to Freeman as she departed to take the assistant city manager position said “Wokie has played an important role in growing UROC into a vibrant, place-based University research and outreach-engagement center.”

To be an effective assistant manager, Freeman says a high level of engagement in the community is key to serving the city’s constituents as well as strong analytical and communication skills. Experience in public administration is a big plus, according to her. She encourages individuals in various disciplines to be involved in their communities. She sees as part of her work, a duty to foster a Brooklyn Park where opportunities exist for all.

Freeman says all citizens, and especially immigrants, need to collectively take ownership of their goals and aspirations in order to achieve them.

“I believe there is a need for everyone to be represented at decision-making tables, and I encourage all of us to become more involved in our communities,” Freeman said.