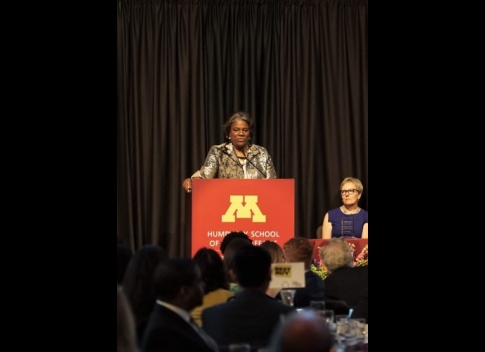 The awards are presented by the Humphrey School of Public Affairs at the University of Minnesota.

“I am humbled and puzzled by my selection for this award but absolutely elated,” Thomas-Greenfield said during her acceptance speech as she mentioned the “giants” that have been past recipients of the award which includes former US vice president Walter Mondale.

Greenfield quoted Hubert Humphrey who once said that we can all make a difference “and that is exactly what I have strived to do as a public servant and as a foreign service officer,” she said.

Before becoming Assistant Secretary of State for African Affairs during the second term of the Obama administration, Thomas-Greenfield was the US ambassador to Liberia. That country’s president, Ellen Johnson-Sirleaf, surprised Greenfield with a video tribute where she praised her for a “distinguished career in service to the United States, Liberia, Africa and the world.

“In the time in our history when many of our young people and future leaders are questioning on whether they want to serve, I would say there is no better time as your nation and the world needs you,” Thomas-Greenfield said.

Present during the awards were this year’s Fellows of the  Mandela Washington Fellowship for Young African Leaders  who are attending the University of Minnesota which is a host university. The fellowship is a brainchild of president Obama.

Monica Meyer, the executive director of OutFront Minnesota, for her leadership in grassroots organizing and in political strategy and advocacy, building coalitions among community activists around Minnesota. Under her leadership, OutFront co-founded Minnesotans United for All Families, the campaign that defeated the state’s proposed constitutional amendment to limit the freedom to marry in 2012 and the push thereafter to legalize same sex marriage in 2013.

Tom Swain, the former Lilydale mayor and former University of Minnesota vice president, for his long and distinguished life of active citizenship, and his commitment to education and government, developing opportunities for future civic leaders.

Thor Companies, which most Minnesotans might know as Thor Construction, was founded in 1980 and is the state’s largest black-owned corporation and one of the largest African American owned general contractors in the United States. The company was honored for its innovative approach to economic development, bringing opportunity and revitalization to north Minneapolis through strategic partnerships and investments. The company is currently building its new $30 million national headquarters in the predominantly black neighborhood of north Minneapolis. The company’s founder and chairman, Richard Copeland and Ravi Norman, CEO of Thor for the last eight years received the award on behalf of the company.