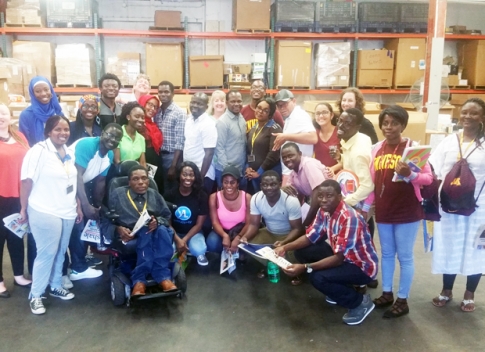 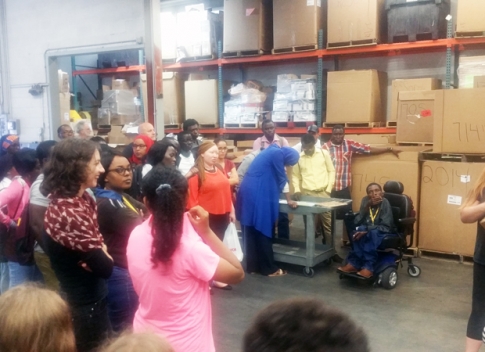 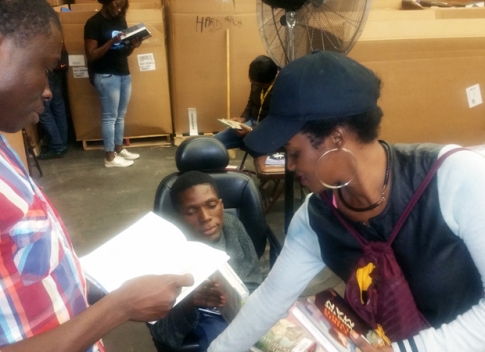 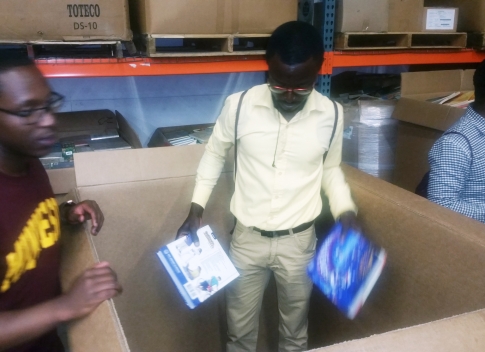 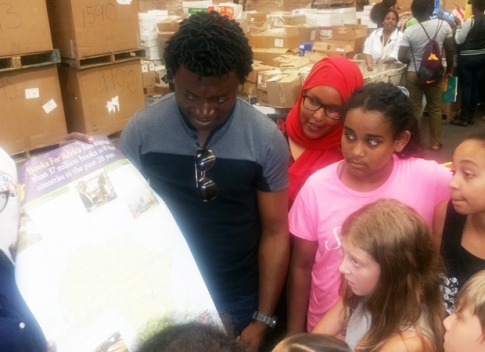 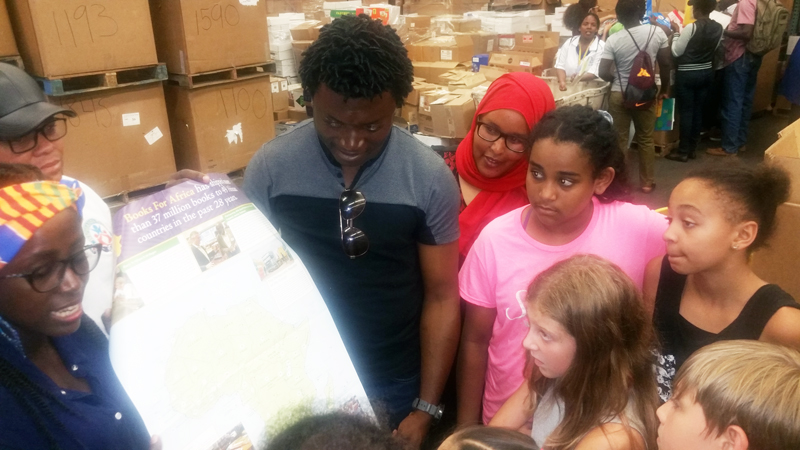 ST. PAUL, Minn. (Mshale) – Today, July 18, would have been the late Nelson Mandela’s 99th birthday. The late Mandela fought for equality and democracy and spent 27 years in prison for his fight for the majority of black South Africans to participate in governing their country.

25 fellows with the Mandela Washington Fellowship, which is run by the U.S. State Department, observed Mandela Day by converging at the Saint Paul warehouse of Books for Africa to sort and pack books that are bound for Africa. The State Department runs the fellowship through the Young African Leaders Initiative (YALI) which this year has brought 1,000 promising African leaders for six-week long residencies at universities across the country. This was one of former president Barack Obama’s signature initiatives targeting the African continent.

The universities across the United States that host the fellows focus on different disciplines with the University of Minnesota’s Humphrey School of Public Affairs focusing on public administration.

After a brief welcome and instructions from the warehouse manager April Gilbert and Books for Africa board president Luanne Nyberg, the fellows worked in groups in sorting and packing books and by the end of their volunteer activity had packed over 20 boxes.

Books for Africa is the largest shipper of donated school text books to the African continent and has shipped over 39 million books since its founding in 1988.

Most of the fellows at the warehouse today admitted to not knowing about Books for Africa before coming to the U.S. for the fellowship but all signed up enthusiastically for the Mandela Day activity.

The one exception was Immaculate Willbroad Kyamanywa, a human resource officer with Tanzania National Parks (TANAPA). Her organization has been a recipient in the past of books from Books for Africa that TANAPA then distributed to schools bordering the national parks.

“When I heard we were coming to Books for Africa I could not wait as I knew the books we were going to pack will end up in Africa as I have seen it,” Kyamanywa said.

Her enthusiasm rubbed off on her colleague from Togo, Hezouwe Moise Akebim, who as he carefully packed books into a box said he is now a convert and that he will make sure “this initiative succeeds.” Back in his country, he doubles as a linguist and grammar school teacher as well as a clerk of the court so he seemed to be quite at home with volumes of books as he got inside one of the boxes to call out for books to be handed to him for proper packing.

One particular fellow was practically giddy from the whole exercise. Winnie Anyango Singwa of Kenya who heads an NGO called Wing It Up-Kenya that serves young girls in her country by providing sanitary towels. She said one of the initiatives she has is book drives to provide that much needed resource for the girls.

“Look at all these books, I wish I could take all of them,” she said as she gestured towards the boxes they had just finished packing. She said she looks forward to working with the organization to get more books into the hands of the young girls she works with.

As he passed books to go into a box from his wheelchair, Ian Banda, who advocates for the rights of children with disabilities, said it is important to promote the reading culture in his native Zambia even with “the very few libraries we have.”

As much as the Mandela Fellows got a lot of satisfaction from the volunteer activity the warehouse, they probably did not top the look of excitement children from the Community Partners in Youth of New Brighton. The dozen or so children aged around 7 had come to donate books they had collected and ended up getting a full lesson on Africa. Pulling out a map of Africa with the number of containers each have received, Mandela fellows Abena Yeboaa Tannor of Ghana and Nangoh Nangoh Maweo of Cameroon, conducted an interactive lesson with the children as they helped them identify and learn about the 54 African countries. A lesson that ended with broad smiles on the children and a new friendship.

“Since they came for the six-week residency, service has been part of their experience here and this definitely is one of them,” said Merrie Benasutti who heads the Mandela Washington Fellowship at the Humphrey School