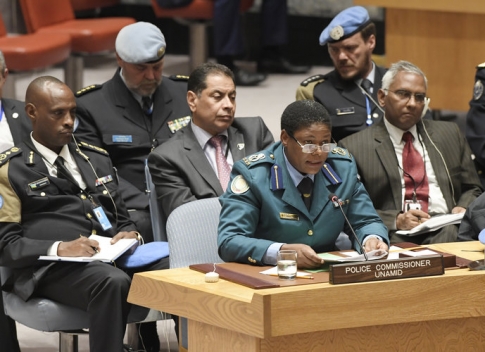 On November 6-10, the Police Division convened the 2017 UN police week. Heads of police components (HOPCs) in UN peacekeeping operations and special political missions came to New York for discussions, as well as briefings to the Special Committee on Peacekeeping Operations and the Security Council.

During the week, Heads of police components considered the recommendations of the Internal Review of the UN Peace and Security Architecture related to UN policing, the status of implementation of the Secretary-General’s reform plan on UN policing as outlined in S/2016/952, as well as Security Council resolution 2382 (2017).

Building on Security Council resolution 2382 (2017), Police Commissioners focused on Wednesday on how police can be more effective in conflict prevention, peacekeeping and peace sustainment. Heads of UN police components also discussed how to achieve gender-responsive policing. As of September 2017, 1,118 female police officers from 70 countries serve in peacekeeping operations and special political missions. They act as role models for gender equality, inspiring women and girls to advocate for their own rights and pursue careers in law enforcement.

On Tuesday, the discussions of heads of UN police components focused on partnerships, good practices and challenges of UN capacity-building. More than 11,000 United Nations police officers from 89 countries (as of September 2017), are mandated to assist host-States in reforming their police and other law enforcement institutions.

On Monday, the Security Council adopted resolution 2382 (2017), which supports operationalizing the Strategic Guidance Framework for International Police Peacekeeping. The resolution also recognized the important role that United Nations police components play in the protection of civilians, including in preventing and addressing sexual and gender‑based violence, and violations and abuses against children.