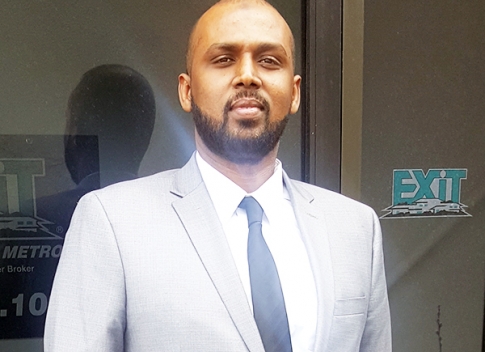 The Minneapolis City Council’s Housing Policy & Development Committee voted 4-1 Wednesday to confirm the appointment of Sharmarke M. Issa as a member of the Minneapolis Public Housing Authority board of commissioners and board chair designee, following his appointment by Mayor Jacob Frey. The lone No vote was by Councilwoman Lisa Goodman who stated she was not voting against the appointees but was expressing her dissatisfaction with the lack of courtesy extended to departing board members.

Issa, 37, a prominent member of the Somali business community, is set to become the first Africa-born person to chair the governing body of a public housing agency in a major US city if confirmed as expected on Friday, May 17 by the full Council. He grew up in public housing in the Cedar-Riverside area.

The authority manages 5,000 public housing units, 42 high rise properties and 700 single family homes. It also manages Section 8 vouchers for over 5,000 city residents that are eligible for them.

The committee also approved the reappointment of Abdullahi Isse to a two-year term and confirmed the mayoral appointments of Mikkel Beckmen and Tamir Ali Mohamud, both to three-year terms. Under the charter that governs the authority, the Council appoints some of the board members with the mayor appointing others, including the chair. Mayoral appointments however need the full council’s confirmation.

If confirmed by the full Council, Issa will be chairing a nine-member board which sets the budget and policy for the authority with the agency’s executive director and CEO reporting to it. The public housing authority budget was $107 million in 2018. Issa will be taking over as chair from F. Clayton Tyler, a Minneapolis lawyer and former Minneapolis Urban League chair.

“I grew up in public housing,” Issa said during a Mshale interview. “I understand very well the issues and fears that exist from the residents’ point of view.”

Issa spent two years in the Utange refugee camp in Kenya before coming to the United States in 1993 at the age of 11. He attended Minnesota State University, Mankato where he received a bachelors in urban and regional studies and a masters in urban planning in 2005 and 2007 respectively.

Councilman Cam Gordon who chairs the Housing Policy & Development Committee praised Issa for being willing to serve saying “We appreciate your willingness to get involved and I am pretty sure you know what you are getting yourself into.”

Gordon was apparently referring to the controversies that have bedeviled the authority in the last few years with affordable housing activists accusing it of wanting to privatize pubic housing, a claim the authority has repeatedly denied.

“I do not support privatization,” Issa told Mshale. “I however want to see the authority come up with a better way to address the long waiting list for public housing and a lottery system might be the way to go.”

The long waiting list is just among the thorny issues awaiting Issa but more urgent might be issues such as the controversial Rental Assistance Demonstration (RAD), an Obama administration federal program meant to attract both private and non-profit investments to public housing in need of dire repair. The MPHA has millions of dollars’ worth of repairs that need to be done to its aging housing stock. Under RAD, tenants would need to be relocated while repairs are done with the promise that they will go back to their units when repairs are done. Public housing tenants however, many who are Somali, do not trust MPHA as they fear the buildings will get privatized and that RAD is a backhanded way to push them out.

“There are definitely weighty issues awaiting me and some I can’t talk about right now,” Issa said. “But we do need to assure the tenants and make a sincere effort to earn their trust.”