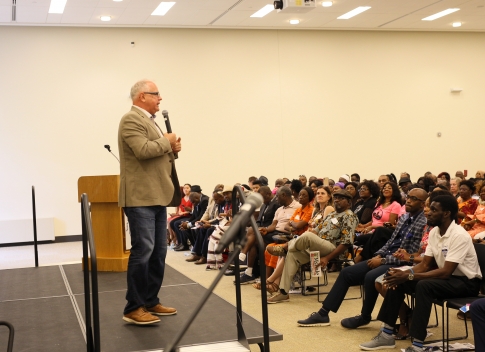 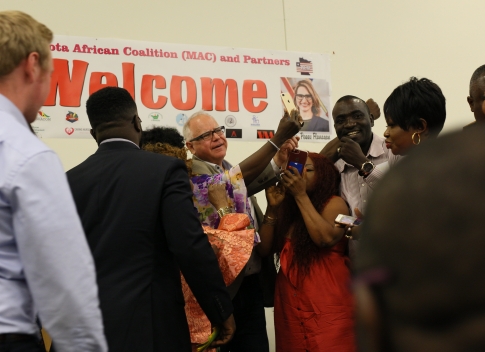 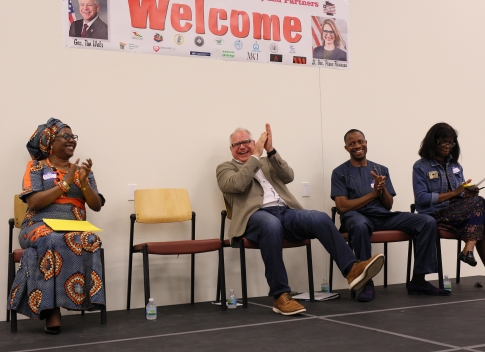 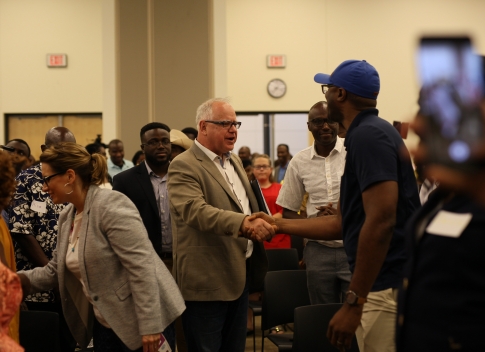 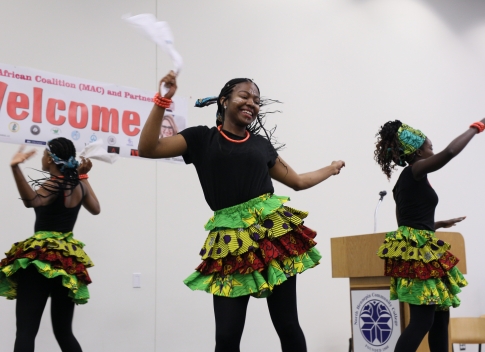 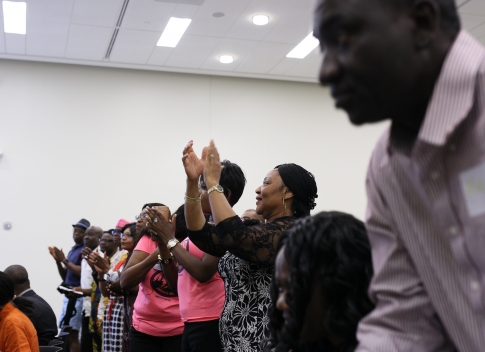 BROOKLYN PARK, Minn. (Mshale) – Gov. Tim Walz and Lt. Gov. Penny Flanagan addressed over 300 members of the African community on Saturday, just six months since taking office and the earliest a new administration has met with the community. Past governors, it was noted at the meeting, wait until election time to hastily arrange one, if at all.

Held at the North Hennepin Community College Great Hall, the event, organized by the nascent Minnesota African Coalition (MAC) in partnership with other African groups, drew a cross section of the community that included heads of the various African cultural groups and professional associations.  A handful of elected officials were also present.

Speakers that preceded the governor’s address called for more civic participation by the African community in order to influence policy. Brooklyn Center mayor Mike Elliott stated Walz’s presence was testimony that “Africans are on the move.”

Jude Nnadi from the Minnesota African Coalition (not to be confused with Minnesota Africans United, which was also among the groups supporting the Saturday event) was effusive in his praise of the Walz administration.

“Even within the five months, I remember your first day in office was to form the One Minnesota Council on Diversity, Inclusion and Equity,” Nnadi said. “And you also appointed the first African to an assistant commissioner position which has never happened in our history, thank you for that.”

The event was marketed as a community gathering focusing on “Celebrating Diversity in Diversity” according to flyers distributed prior. However, both Walz and Flanagan other than in one instance when bemoaning the recent New York Times story on anti-Somali racism in St. Cloud, did not make any direct comments on Minnesota’s African community — the fastest growing black population in the state. Instead, they discussed the importance of providing opportunities for “all Minnesotans.”

“Minnesota is in the top four best states in the entire nation to raise your children,” Walz said. “But all of you know inside of those numbers is something so unacceptable. If your child is white in Minnesota, they are going to get a better education. It has nothing to do with how smart those kids are, but everything to do with how we are implementing things”

Walz, who referenced the value of the state’s “diverse population,” also discussed the importance of politics, which he said is important in bringing about needed change.

“I have people who always tell me I am sick and tired of politics and politicians,” Walz told the town hall attendees. “I tell them too bad politics is into you.”

There are over 3,000 businesses started and operated by African immigrants in Minnesota and almost as many non-profit organizations serving the needs and aspirations of the state’s burgeoning African community. The two share one thing in common – unlike their white owned competitors, they are under-capitalized and under resourced with the African non-profits lacking the needed capacity to effectively accomplish their stated missions.

Those at Saturday’s event voiced concern at the level of bureaucracy and difficulty in accessing the various state services and grants that are available to small businesses and non-profits. Lt. Gov. Flanagan, the highest ranking native American woman elected to executive office in the nation, took the issue head-on.

Flanagan acknowledged the challenge and said the first session of the 91St Minnesota Legislature which concluded in May was a budgeting session whereas the second session which will begin in February will be a policy making session which is where the administration intends to address the thorny issue of access to state support and grants for businesses and non-profits.

“As someone who ran a non-profit, I was trying to navigate the state agencies in government, so I appreciate the concern,” Flanagan said. “We have started the process of changing how the state agencies, including the Department of Health and the Department of Human Services, they have to say who they have dealt with in the community and whether it is something the community has asked for.”