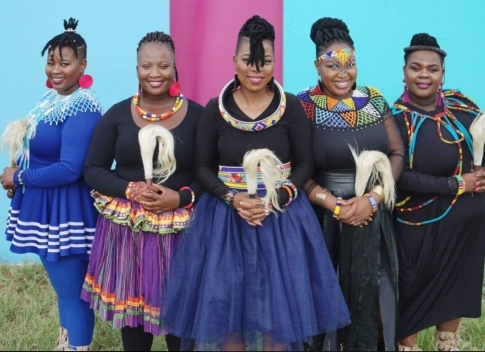 The week before Thanksgiving and already our ears are thankful. Nobuntu’s performance at The Dakota in Minneapolis last November 21st drenched our senses as we sat in the audience. The five Zimbabwean women plucked their starting notes out of thin air in a unified motion, singing songs from many African ethnicities as well as American spirituals and cover songs from American musicians.

In the Mbube style, Nobuntu proved that women could produce the sound-sensation equal to any male chorus. Mbube, brought to prominence by Ladysmith Black Mambazo, consists of  groups of voices singing homophonically in rhythmic unison. They create intricate harmonies and textures.

“Ladysmith said only men could do it, but seven years ago,” Nobuntu member, Zanele Manhenge, proclaimed from the stage, “we decided we could sing it as well.” The audience agreed with a rousing round of applause.

Singing primarily in Ndebele, Nobuntu yet conveyed the sometimes somber topics of domestic violence and child abuse through their songs. Not satisfied with simply entertaining their audience, the quintet bookended their songs with brief lessons in Zimbabwean history and political strife.

Zimbabwe shares its southern border with the most northern tip of South Africa. Nobuntu also shares the musical trills, whistles, and twitterings distinctive to their southern neighbor. These vocalizations accented most if not all of their songs.

Nobuntu incorporates dance into their performance along with equally beautiful costumes. The clothing represented the Venda, Swati, Tsonga, and Herero peoples. Luxurious colors flashed and flitted on stage as they sang nearly two dozen numbers. A couple attempts at call-and-response songs fell flat as the audience preferred to hear the band sing rather than add their own voices.

In a near-capacity venue, Nobuntu gave a memorable performance removing any doubt that Mbube music is both universally appealing and appropriate to both audience and performer.