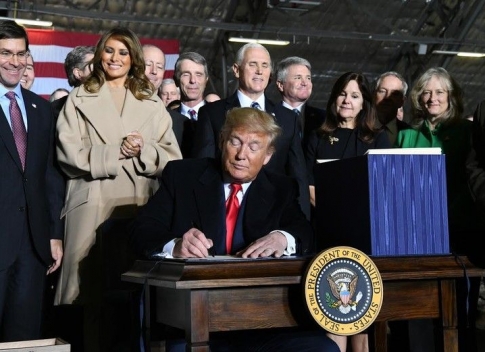 Thousands of Liberians across the United States can breathe a sigh of relief as the legislation allowing those on Deferred Enforced Departure to be eligible for permanent residency becomes law. Last night (December 20), President Trump signed the National Defense and Authorization Act for the 2020 fiscal year. The bill included language that allows for Liberian nationals living in the United States under Deferred Enforced Departure to be eligible to apply for permanent residency.

Following the outbreak of the Liberian civil war in 1991 then President George H.W. Bush granted Temporary Protected Status (TPS) to Liberian nationals who were vulnerable to deportation. TPS is granted under the circumstances of war, natural disaster, or otherwise dangerous conditions that make it unsafe for individuals to return to their home countries.

In his second year of office, President Trump weighed ending the program after deeming conditions in Liberia as safe. After pressure and activism from law makers and activists the President extended the program for a year following March of 2018. Earlier this year on March 8, a lawsuit challenging the termination was filed and three days before the program was set to be terminated, DED for Liberian nationals was extended till March of 2020.

In the nearly three decades since TPS was awarded to Liberians, individuals who have made the United States home for decades were faced with yearly anxiety as congress decided their fate to live in the U.S. “Every march I get an email, a countdown from my job. Because of my status” said Linda Clark, a DED holder and manager at Wells Fargo.

Clark, who has been living in the United States for 19 years had the opportunity to accompany Representative Ilhan Omar to the State of the Union Address where she was able to meet House Speaker Nancy Pelosi and advocate for immigration reform for DED holders.

This victory has arrived after years of activism and organization led by Liberian community members, local allies, and congressional members. “If it was not for the organizing in the last 20 years we would not be here,” Nekessa Opoti said.

Opoti is the co-founder of the Black Immigrant Collective, an organization that seeks to empower and protect immigrant rights in the United States.

Having been recently signed into law, the United States Citizenship and Immigration Services has not published instructions for filling for permanent residency under the latest bill. Activist Abena Abraham of the Black Immigrant Collective suggests those currently on DED speak with an immigration Law attorney before advice on how to proceed.

The provision for permanent residency will be extended for individuals who have been continuously living in the United States since 2014. Residents have a year to complete their fillings after the enactment.

The latest victory in immigration legislation for the Liberian community comes with an awareness that other immigrant groups have yet to be granted the same status. “I’m still concerned for DACA,” Clark said referring to the legislation that grants temporary status for undocumented individuals who came to the United States before the age of sixteen. “I’m praying for their opportunity and their peace to come”.

As the Liberian community closes the year on a positive note, individuals can move forward in their country with ease and a piece of mind. “We are grateful. We are thankful. This is the best Christmas ever” Clark said.