Today April 1 is Census Day and state and local government officials have been using the weeks leading up to it to encourage all residents to participate in the national 2020 census.

The once a decade opportunity makes it imperative that every Minnesotan, whether a citizen or not, even if undocumented is counted, said Brooklyn Park Community Liaison Brenda Morales during a Kenyan community meeting recently before the COVID-19 crisis. The city is home to a large concentration of African immigrants especially Liberians, Nigerians and Kenyans. Morales said her city is home to many historically under counted populations like African immigrants.

Participation helps ensure the state and communities such as Brooklyn Park receive the appropriate amount of federal funding and grants to help support schools, public safety resources, infrastructure resources, and more. An undercount of even just one person means Brooklyn Park loses $28,000 in funding for each person, said Morales.

Most Minnesotans should have already received their census form in the mail, and for those who haven’t already completed and returned it, today is a great day to do so, according to email and social media messages officials have been sending.

Minnesota Governor Tim Walz for example tweeted this morning “It’s #CensusDay, Minnesota! Don’t let social distancing guidelines keep you from being counted. I encourage you to take 5 minutes today to complete your Census form by phone, online, or by mail. Let’s make sure every single Minnesotan is counted.” 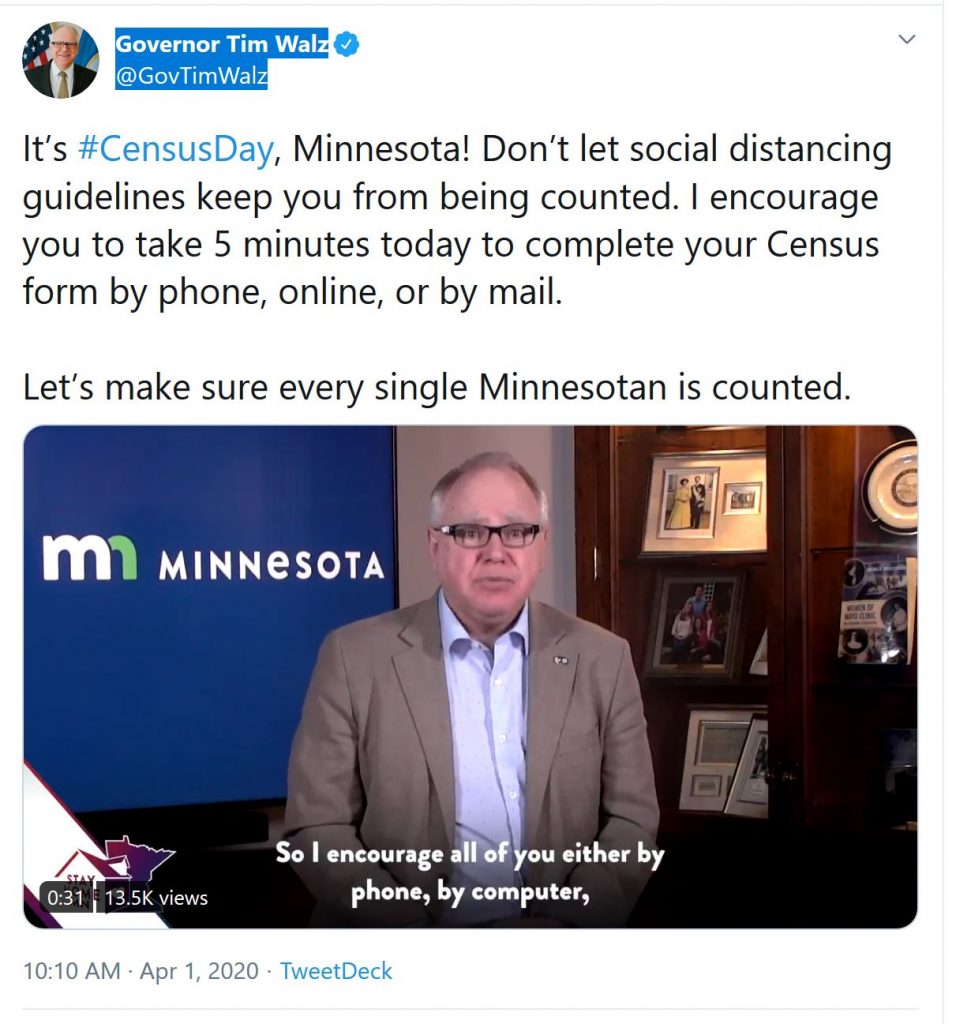 Rep. Mohamud Noor, the only elected black male in the Minnesota House of Representatives, took to Facebook to encourage participation “Happy Census Day 2020! Please fill the statistics https://my2020census.gov/,” he said.

April 1 is known as Census Day because it’s the day residents should reference, according to the US Census, when providing information about who lives in their home.

Information provided in the census, including residency status (documented or undocumented), is confidential and protected by federal law. This information can only be used to produce statistics, and cannot be shared with law enforcement or immigration enforcement agencies, or to determine eligibility for government benefits.

Why the census matters:

Complete the Census 2020 Online to avoid a visit from census staff:

For the first time in Census Bureau history, the census can be completed online, as well as by mail or phone. To respond online, you will need the materials each household should have already received in the mail. If you do not have or did not receive these materials, call 1-800-354-7271 to get a user ID.

As early as May, depending on the COVID-19 situation, census takers may start going door to obtain responses from those who have not completed the census. The census only asks questions about your residence, age, sex and the number of people who live with you.