Abdirizak Bihi, a long-time Minneapolis resident and leader in the local Somali community, has been appointed a citizenship ambassador by the U.S. Citizenship and Immigration Services (USCIS).

Bihi, the director of the Somali Education and Social Advocacy Center, is one of eight people across the United States selected for the first-ever citizenship ambassador initiative, whose goal is to leverage partnerships with immigrant community leaders to promote citizenship. He will serve as the USCIS citizenship ambassador to Minneapolis.

“His vision to educate and train community leaders for civic action and engagement comes directly from the experiences of his father, who was imprisoned for seventeen years in Somalia for consistently speaking out on behalf of the community,” Deborah D. Cannon, a public affairs specialist at USCIS’s Media Affairs Division, said in a statement.

U.S. citizenship is important because it opens new opportunities for immigrants in the United States. According to USCIS, a non-extensive list of the benefits of citizenship includes voting rights, ease of travel by documents like U.S. passports, and eligibility for certain governmental positions that aren’t available to noncitizens. But immigrants often face obstacles preventing them from applying for citizenship, according to a 2020 study by the Migration Policy Institute, a nonpartisan organization that conducts research on immigration. Some of the barriers include insufficient time to prepare for citizenship interviews, and high cost of processing fees.

Cannon said that the new USCIS initiative is designed to connect the more than 9.1 million lawful permanent residents who may be eligible to apply for naturalization with the resources they need to begin the process.

The citizenship ambassador initiative was created by President Joseph R. Biden’s Executive Order 14012 to promote naturalization. In a press release, USCIS Director Ur M. Jaddou said she believes that citizenship is vital to the nation’s economic prosperity and wellbeing of immigrant communities. She said the new initiative would create opportunities for immigrants to advance their lives.

“The citizenship ambassador initiative is a positive step towards raising awareness of the many benefits of U.S. citizenship and providing tools that help immigrants become successful as they embark on their journey as new citizens and beyond,” Jaddou said.

Bihi has lived in Minneapolis’ Cedar Riverside neighborhood for 25 years, and is very active in the politics of the city. He ran for a seat in Ward 6 of the Minneapolis city council in 2020, and in a special election in 2021. He has dedicated his career to pushing for policy reform in areas such as housing, economic upward mobility, and police reform.

Along with the seven other ambassadors, Bihi will aid aspiring U.S. citizens by sharing his experience with the naturalization process, reiterating the advantages of citizenship, and serving as a source of knowledge and inspiration for those who choose to pursue the process.

“I am very humbled to be one of these eight leaders chosen as a U.S citizenship Ambassador,” Bihi said in a statement on his Facebook page. “[I’m] looking forward to working with every community.” 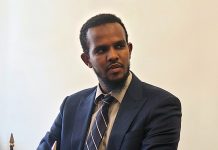