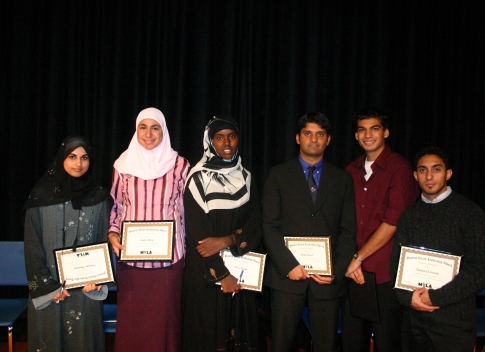 Six college students are the recipients of scholarships totaling $15,000 from the Muslim youth Leadership Awards (MYLA) for the 2005-2006 academic year. All winners this academic year are from the University of Minnesota . The scholarships were announced in September by MYLA, a young Minnesota based non-profit in its third year of formation that seeks to encourage a spirit of community service in the youth along with their educational endeavors.

This academic year for the first time, the grand prize was more than doubled, from the previous years’ $2,000 to $5,000. Sumaiya Mamdani, a child psychology major in the University of Minnesota ’s college of liberal arts was the winner of the beefed up grand prize. The other five winners each received a $2,000 scholarship. The $2,000 is also a significant jump from last year where the winners received $1,000 each.

The winners constitute first and second generation immigrants from various parts of the world such as Asia, Africa and the Middle East . All six are active in the community in various ways, from organizing a Somali sports and youth organization in Rochester , teaching Arabic at the various cultural centers around the Twin Cities to being a youth leader at an Interfaith Youth Forum started by the Archdiocese of Milwaukee for select teenage Muslims, Jews and Christians.

MYLA invited noted Muslim scholar and Imam of the Masjid At-Taqwa mosque in Brooklyn, New York, Imam Siraj Wahaj to keynote the award presentation ceremony on October 9 held at the Maple Grove Junior High School . The ceremony took place in the school’s auditorium following prayers and iftar (A meal served at the end of the day during Ramadan, to break the day’s fast). Elated MYLA officials marveled at the crowd of people that filled the auditorium saying they had not anticipated more than 200 people going by their previous two award ceremonies. Every seat in the 500 capacity auditorium was taken with a few people having to stand. The award ceremony also served as a fundraiser for MYLA’s scholarship fund.

The Imam’s talk was entitled ‘The Future of Islam in ’. Imam Wahaj also has the honor of being the first Muslim to have delivered the daily prayer in the U.S. House of Representatives in June 1991.

Imam Siraj Wahaj said for Muslims to succeed in , they must not forget their primary objective of caring fro everyone.  The Imam said Muslims should care about the welfare all of people but especially the weak and poor so that no one can say that Muslims “don’t care about Black people, or the poor” a reference to Kanye West’s accusation during hurricane Katrina that president Bush did not care about Black people. Imam Siraj said if one is a true Muslim, people will have no difficulty feeling your compassion.

The Imam said his concern with Muslims currently is that “95% of Muslim children (in ) go to public schools” because many parents who wish to send their offspring to Muslim schools cannot afford it, a state of affairs that should concern all. He told the audience that all of his nine children went to Muslim schools. He also expressed disappointment that a quick search on the web will quickly reveal the dearth of Muslim educational institutions as compared to Jewish and Christian ones. He commended MYLA for taking the first important step in securing the future of Islam by enabling today’s youth to pursue higher education. He exhorted those present to give generously to further advance MYLA’s work. After his presentation, he skillfully and entertainingly led those present in raising money for the scholarship fund. In the style of a seasoned auctioneer, he solicited pledges and checks from the receptive audience which quickly obliged.

The Imam said for Muslims to get ahead, resources will be needed because as Martin Luther King, Jr.  said “he who gets behind in the race must forever remain behind unless he runs faster than the man in front”. Muslims should also not be driven by the media but with their knowledge of information, truth and justice. Imam Wahaj said though there are many in the community that may not approve of Hollywood stars and their ways, the likes of actress Angelina Jolie, should give one food for thought on the spirit of giving that is incumbent for those in the Muslim faith. He told those present that Ms. Jolie gives a third of her salary to charity and has also adopted children from and .

The winners of the 2005-06 MYLA scholarship awards are as follows:

(More detailed information showing the community involvement of each recipient can be found on the MYLA website – www.mylawards.org).

More information about MYLA can be found at www.mylawards.org.