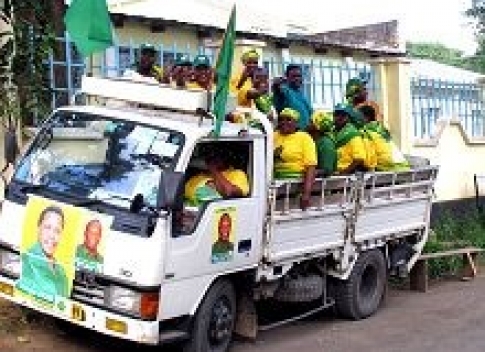 Among the nine other candidates, only the Civic United Front’s (CUF) Professor Ibrahim Lipumba amassed more than 10% of the vote coming in at a distant second with some 1.3 million votes.

Tanzanians voted in predominantly peaceful atmosphere with some outbreaks of violence on the semi-autonomous archipelago of
Zanzibar
where CCM and CUF supporters clashed. On October 30,
Zanzibar
held its own elections, which were also followed by skirmishes, after it was announced that the CCM incumbent president, Amani Abeid Karume, won decisively. CUF continues to reject those results even though official observers reported that the elections were overall free and fair. Preliminary observer reports of the union elections also recorded them as free and fair.

While Kikwete’s victory had been long considered a sure thing, some political analysts and journalists had predicted that opposition parties would gain political strength in the parliamentary elections and overall presidential vote. As ballots were counted over the week, however, it was clear that the opposition would not make any major gains and, in fact, some opposition incumbents lost their seats.

CCM won some 206 of 232 parliamentary seats up for election, ousting such stalwarts as CUF’s Wilfred Lwakatare in Bukoba and winning in districts in the  Kilimanjaro region home to formidable presidential candidates, Augustine Mrema of the Tanzanian Labor Party (TLP) and Freeman Mbowe of Chadema.

Coming in third and fourth respectively in the presidential elections, both Mbowe and Mrema fall far short of the vote totals they expected, results particularly troubling for Mbowe, who, as Chadema’s first-ever presidential candidate, had been trumpeted as a rising political star. Kikwete’s resounding victory far surpassed that of his predecessor, Benjamin Mkapa, who won over 71% of the total vote in the 2000 elections.

At the time this issue of Mshale went to print, the newly elected president had yet to nominate the 37 seats in parliament reserved for women. Five other seats are reserved for representatives from
Zanzibar
’s legislature. Ultimately, the opposition stands to make only a nominal gain in total seats.

The elections came after the most heated and hyped presidential and parliamentary campaigns in ’s history. Originally to be held alongside
Zanzibar
’s elections on October 30, the union elections were postponed for 45 days after the death of Chadema’s vice-presidential candidate, Jumbe Rajab Jumbe. Some analysts have already credited that delay for CCM’s stronger than expected showing, as most opposition candidates lacked the massive financial resources of the ruling party.

A former socialist one-party state, first held multiparty elections in 1995. Former president Benjamin Mkapa won that election and the subsequent on in 2000. He left his legacy by increasing liberalization of the economy and foreign investment. From 1995-2000, the newly elected president, Jakaya Kikwete, served in Mkapa’s cabinet as the minister for foreign affairs.