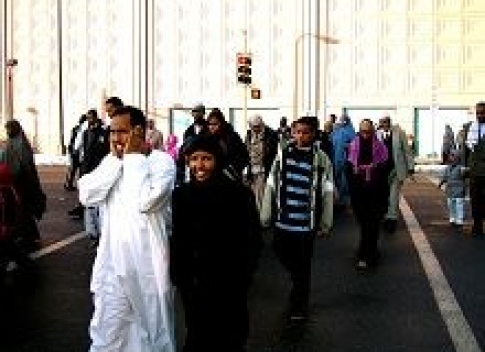 Tuesday January 10 was EID-EL-HAJJ, a Muslim holiday marked annually by families slaughtering animals for sacrifice and protein food. Muslims across the globe numbering 1.2 billion carried out this ritual as a record 2.5 million pilgrims from all over the world completed their visit to Islam’s holiest shrines (HAJJ) in the cities of Mecca and Medina in .

During this occasion, Muslim families slaughter a lamb, cow, goat or camel following on the tradition of Prophet Abraham who was ordered by God to sacrifice his son Eshmail (Ismail), and when he obliged, God sent a lamb through arch-Angel Gabriel and thus Ismail’s life was spared. The slaughtered animal is divided into three portions, one for the family’s consumption, the second portion is for neighbors and the third portion is for the needy. Thus the occasion is usually referred to as the feast of sacrifice.

The pilgrimage (HAJJ) is the fifth pillar of Islam and is undertaken by every believing Muslim with the financial ability and good health at least once in a lifetime. It is a way to connect with their creator as the Holy City of Mecca contains the symbolic House of God (KAABA) which is the Muslim niche of prayer. Kaaba was first erected by Adam, and then rehabilitated by Abraham and Ismail and it contains the Black Stone (HAJAR’L’ASWAD) believed to be the remains of various types of clay which Angel Gabriel collected from which Adam was created by Allah.

The scripture reveals that when Abraham settled in
Mecca
with his wife Hajra and son Ismail, the KAABA was full of idol Gods of wood and stone and Abraham destroyed them and called for the worship of one true God. The unbelieving Meccans were furious and prepared a big fire and plunged Abraham in the middle so that he could die for destroying their idol Gods. The big fire burnt out and only ashes remained, but Abraham emerged from it unscathed!

The pagans of
Mecca
were shocked to see Abraham survive the great fire and some started to succumb to the one true God (Allah) who protected Abraham from that ferocious fire! When prophet Muhammad (may the peace of Allah be upon him) was born in Mecca in 570 AD as a descendent of Abraham/Ismail, idol worship had again returned to
Mecca
and Kaaba was filled with traditional Gods of Wood, stone and date palm. As he turned 40, he started preaching belief in one God and beseeched Meccans to abandon idol worship. They detested this new ideology from the traditions of their forefathers and plotted to kill Muhammad; but he escaped and settled in
Medina
.

Medina is “the city of the prophet” and it is in
Medina
that Muhammad build a strong following of Muslims who eventually returned and cleansed the Kaaba of Idol worship. When he died at the age of 63, he was buried in his mosque in
Medina
and pilgrims pay their respects to his tomb during the annual pilgrimage.

Muslims who go for pilgrimage dress in two while plain un-sewn cloth with simple sandals and no headgear. At the climax of HAJJ, they assemble  at the plain below

where it is believed God in the company of Angels descend to forgive the pilgrims of their sins.

While in Mecca and
Medina
, Muslim pilgrims visit the KAABA for special prayers, drink from the ZAZAM well which started to gush blessed water since the days of Ismail. Hajra ( Ismail’s mother) raced between the hills of Safwa and Marwa in search for water for the crying baby. Arch-Angel Gabriel struck a rock near the Kaaba, and Zamzam water has been flowing ever since.

The presence of Zamzam water in the desert
land
of
Saudi Arabia
became the main cause of a settlement taking shape in Mecca as business caravans from and had to stop for water. Today
Mecca
is a flourishing city with modern amenities and has grown on account of annual pilgrims coming from all the Muslim nations of the world. Because of the increasing demand of pilgrims travelling for HAJJ, the authorities in consultation with other Muslim nations across the globe have set up quotas for each country to maintain a manageable crowd during the HAJJ occasion. As many as 3 million people have traveled for HAJJ on one occasion, and it has caused some administrative problems to Saudi authorities and have thus settled on a quota system and this year, 2.5 million pilgrims carried out their HAJJ peacefully.

In
Minnesota
, Muslims held early morning prayers in special designated cites and mosques for the EID EL HAJJ celebration before joining families, friends and neighbors for the meat bonanza. The main prayer- site in the Twin Cities was the

. Thousands of Muslims congregated for early morning prayers and created an extra burden on the traffic, as multitudes driving off and walking across the road at the end of the prayers required extra caution to avoid accidents.

The air was filled with the Muslim greeting of “EID MUBARAK” – literally, may the blessings of God be upon you on this occasion – a gesture of goodwill and solidarity among mankind. For those who visited the holy shrines in for the pilgrimage, it is an occasion when Muslims from all over the world meet as equals before God. There are no distinctions of social status where a King, Sultan, or President cannot be distinguished from a garbage collector, as there are no “high tables” or “VIPs” among Muslims, just one brother-hood of equals before God!

It is a pity that such a glorious religion has at times been associated with criminal acts of terrorism when indeed Islam is a religion of PEACE and brotherhood among human beings.

With this year’s pilgrims numbering 2.5 million, an equal number of animals ranging from lamb, goat, cow and camel have been slaughtered in the holy shrines of Islam alone. There is so much abundance in meat during the pilgrimage that authorities have designed a comprehensive method of sending thousands of tons of meat in cold frozen containers to areas around the world with food shortage or famine. This is the true spirit of HAJJ and mankind is better off on account of this humanitarian gesture from the Muslim faith.  Contrary to misconceptions and other misrepresentations, Islam is the religion of love, peace and brotherhood.