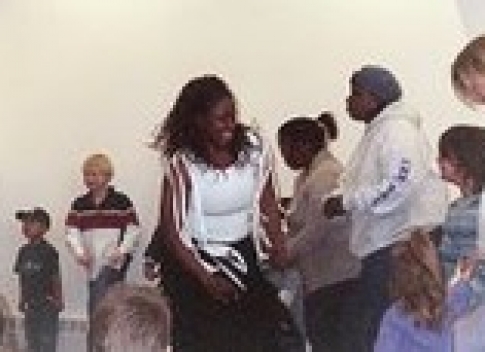 Eden Prairie, MINN – It’s common knowledge that hip-hop dancing is a veiled attempt to sexualize the movements of African dance.  Isn’t it?  According to G. Craige Lewis who preaches nationally as well as at his website, “The roots of Hip Hop are demonic. Oppression, anguish, poverty, violence, and other negative influences created this culture.”  However Edna Stevens Talton takes a very different view of hip-hop dancing.  And she should know.

Stevens Talton, a native of Liberia, immigrated to the United States when she was seven years old.  Fresh from winning the Bright Functional School’s annual Liberian Pageant, Stevens Talton continued, even as an adult, in her pursuit of dance knowledge and skill. She now seeks to suggest another point of view than the one held by G. Craige Lewis and others like him.

“I did a workshop last week at the Ordway for a group of educators and one of the educators commented, ‘hip-hop– I’ve always seen it as a provocative style of dance.’  and I said, ‘no, it’s not.  It’s actually how one presents it… when I give an explanation of why it’s done the way it is, such as ‘hey, this is a celebration dance in Africa, this is why we do it, we’re happy’ then it’s viewed differently.”

During the month of February, Stevens Talton’s dance troop, Universal Dance Destiny, performed at three Hennepin County libraries.  I had the good fortune to watch and participate at the Eden Prairie County Library show on February 18.

Saturday morning Moses Brown and Gbassay Zinnah begin pounding on their d’jembe drums while a crowd of 75 people, many of them under ten years old, look on.  Initially, the motionless crowd holds their hands and their children in their laps.  As the drumming continues, folks slowly start to warm up.  Shoulders twitch, heads bop, and tots squirm free to move on the carpeted floor.  The program, sponsored by Young Audiences of Minnesota, hits their target audience this morning.

Zinnah plays his steady heartbeat d’jembe while Brown uses a more punctuated rhythm, like popcorn.  Both of these percussionists were once part of the Liberian Culture Troop, a musical start-up band based in Liberia.  Soon Stevens Talton along with Shanice Craig (14), Joshua Raul Stevens (14) and Lyric Hughes (10) walk to the front of the room.

African dance relies mainly on rhythm.  “You have no dance if you have no African drum,” declares Stevens Talton.  With feet barely touching the floor, the four dancers bounce around the audience, exposing many, possibly for the first time, to authentic West African dance movement.  Ten minutes later, Stevens Talton begins teaching us about the similarities between African dance and hip hop dance.

“Being that I live both worlds, the African and the corporate worlds, that’s why I named my company Universal Dance Destiny.  You’ve got to find an avenue in how to bring people together.  And if one (world) is not understanding then you help them understand.”

We are then served a vigorous helping of Liberian SouSous, sometimes known as the Chicken Head dance, the Wabbee, also called the Pancake or African Walking dance, as well as break, popping, locking, klowning, and krumping, all features of hip hop dance.

The sensual visuals of hip-hop are put in a new light.  Stevens Talton explains,  “Shanice is so slim, I don’t care if she does that (hip movement), but I have another dancer and myself, we’re very curvy, so usually when she does her part I always ask her to play down the hips because she can be seen differently than someone who doesn’t have all of those curves.  So it is a lot of the hip movement.  Many people  don’t understand how our African dance emanates from the hips, but that’s what we know culturally. ”

Volunteers are solicited and given the opportunity to try their hand and foot at the heel-step-toe movement and other basic hip hop steps.  Popping, which looks robotic and difficult, is demystified as the dancers show us how a series of tightening a muscle, such as one’s bicep, and releasing it produces the intriguing effect.

Having defined muscles to begin with certainly helps.  Stevens Talton doubtless has the muscle tone necessary for demonstrating before the crowd.  She teaches dance at the Capri Theater in Minneapolis, along with hip-hop, salsa, cha-cha, funk, and hustle swing, to name only a few of the many dance forms taught at Universal Dance Destiny.