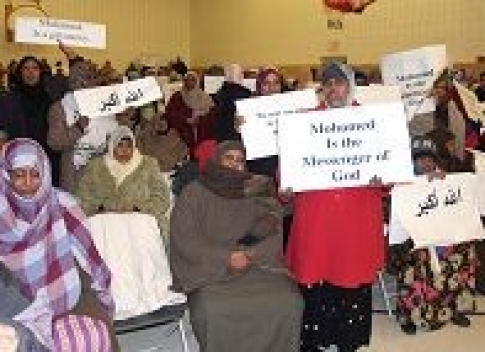 Minneapolis, MN
– Overseas, protests over cartoons were hardly non-violent. But the one organized by Twin Cities Muslims was deliberately different: Peaceful.

So peaceful that furor against Muslim violence seconded the furor over the cartoons- the subject of the rally in
Minneapolis
.

An estimated 1,000 Muslims crammed into the Brian Coyle center on Feb. 20 to denounce controversial caricatures originally published on a small Danish newspaper that lampooned prophet Mohamed in an unflattering manner.

“The best way to defend our prophet is peace, his core message to us,” said Mona Ahmed, 24, a student at the

“Violence doesn’t help at all.”

In Islam, the depiction of Mohamed, positive or negative, is considered blasphemous.

The protest was the first relating to the cartoons held in
Minnesota
.

The publication of the 12 controversial cartoons in September had a domino effect around the world. Several European newspapers reprinted the caricatures in solidarity with the Danish paper and to uphold freedom of expression, further exasperating Muslims.

So far, about 45 deaths, mostly in , and , are blamed on the cartoons.

Minneapolis
protestors said that they are in solidarity with global Muslims in condemnation of the cartoons, but do not condone the violence and lawlessness that followed.

To do just that, protestors were decidedly calmer, labeling violence as an “Unislamic.”

“Islam basically means peace,” said Ahmed Abdikarim, a member of the rally organizing panel. “Despite strong reactions, we’re very discontented with the acts of violence and distraction around the Muslim world.”

Sentiments of distress with the violence seem to be equally picking up around the Muslim world. A consortium of renowned religious leaders and scholars recently issued a statement flatly denouncing violence and warning that Muslims may become “pariahs”. The statement, though, was unapologetically critical of the cartoons but cautioned that violence may overshadow the very protest aimed against the problem.

In some ways, the discontent with violence overshadowed the cartoon protest at the
Minneapolis
rally. Almost all speakers voiced concerns about a negative perception of Muslims if violence is not quelled immediately.

Many protesters were holding signs that read “Mohamed is a gift of mercy” and “Mohamed is the messenger of God” among others.

Another highlight of the protest was the fact that most major American newspapers have not published the cartoons, earning a rare praise from Muslims.

A call for prayer was announced halfway through the rally. Most men stood in lines, facing northeast, the direction of Ka’aba, Islam’s holiest site in Mecca and, quietly pronounced “Allahu Akbar” (God is great). Women prayed in a nearby room.

Organizers say that they are considering holding similar protests in other Minnesota cities where there is a significant Muslim community, such as
Rochester
.