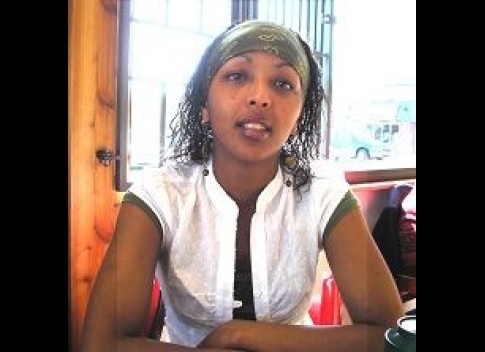 Minnesota immigrants, especially those from Africa, have come across Nimco Ahmed, the dynamic political activist who has dedicated her life to work for the improved welfare of people of color. Nimco who hails from war-ravaged Somalia has made her mark in Minnesota as a power-house in propagating positive civic education to encourage voters pick appropriate candidates who truly represent their specific political agenda.

She believes that without active involvement in politics, and especially during elections through casting their ballot to deserving candidates, the electorate will have abdicated its constitutional responsibility of supporting eligible candidates who truly represent their interests. When you have wrong guys assuming office and being a part of the legislature, she laments that they will pass laws that do not reflect the core values of the people.

The youthful Nimco is currently supporting the candidacy of Amy Klobuchar who is running for United States Senate. Amy Klobuchar is known for her resolve to address issues dearest to communities of color In line with this goal, she is scheduled to have an open dialogue with African community leaders in Minneapolis on May 27.

Nimco speaks very highly of the candidacy of Amy Klobuchar as a person who articulates beautifully those issues affecting people of color. She appeals to this constituency to step up their support for Amy Klobuchar by checking her track record of public service and pass the word around to others so that as a community “we can have strong leadership and representation”.

On the current debate about reforming the immigration law and how to handle “illegal immigrants”, she said her candidate supports hard working immigrants who pay their taxes and believes that they should be accommodated to achieve their American dream.

“Amy Klobuchar is highly qualified, she was able to keep crime down as Hennepin County Prosecutor and during her tenure in office, crime went down by 20 percent. She deserves to move to a higher office and when Senator Mark Dayton retires, she is the best candidate to replace him. Amy Klobuchar speaks from the heart, she speaks for the community, we should send her to Washington for best representation.”

Nimco Ahmed took her first shot in politics when she worked as an organizer during the campaign of a Minnesota Senator, the late Paul Wellstone. He was the source of inspiration for Nimco and when he died in a plane crush, Nimco was devastated. After Wellstone’s death, Nimco threw her energy into youth mobilization to get them involved in the political process. During that time, she co founded the Minnesota chapters of the Minnesota League of Pissed Off Voters and the League of Young Voters in the run up to the 2004 elections.

“I love my job. I work hard seven days a week. It is in my heart – you cannot pick it from books, if you care for people, working long hours for the community becomes a rewarding passion.” That passion has taken her around the country has she has become a high demand field organizer. Last year, she was involved in the mayoral primary race in Pittsburgh, Pennsylvania before being asked to join the campaign team of then candidate John Corzine, the current New Jersey governor. She was in high demand again after coming back to Minnesota as the current campaign season got underway. She got calls from the various campaigns of those running for Minnesota governor before deciding to join the Klobuchar team.

Nimco is well known among immigrants of color and especially her people of the Somali community who constitute one of the largest single ethnic groups among Minnesota immigrants. Coming from such a large constituency, she wields immense political power as a lobbyist. In the local political parlance, she is a political heavy weight of gigantic proportion in-spite of her small body size!

The second youngest of eleven siblings, Nimco resides in Minneapolis with mother, MaryAnn. Asked what her family thinks of her activism, she says “they think I am crazy, they actually call me crazy – but in a loving way.” She says the family does not understand her depth of passion for politics.

She plans to run for office in the future but does not know yet which one she will go for first.