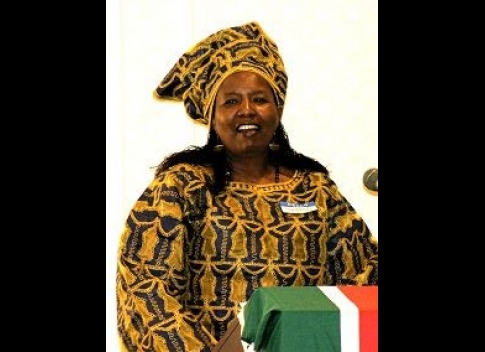 Pastor Bill Heib, from Riverside Ministry Center in Somerset, Wisconsin  says that the daughters of these Kenyan women are born with three strikes against them.  “They’re born girls, they’re born poor, and they’re parentless.”  He’s talking about baby girls born to HIV-positive, poverty-stricken women whose fathers have already died either from AIDS or by some other misfortune.  These are the children Lighthouse Ministries International with a dual base in Kenya and Minnesota hopes to rescue.

The idea for LMI began a dozen years ago in the mind and heart of Sandy Karanja, even before she was married to her Kenyan-born husband, Boniface Karanja.  During her growing up years, Sandy developed a compassion for the lost and hurting.  Sandy tells me, “There is nothing more fulfilling to me, than to see a life that once seemed hopeless, be transformed into a life worth living, with a purpose for the future.”

Paulette Kutzler, known as PK Midday on KTIS Radio, volunteers her time to emcee the fundraiser.  Elizabeth Hunnicutt, a professional musician, also performs gratis.  Before singing one of her songs, the acoustic guitar players tells the audience, “I would sometimes think, ‘Well, I can’t save the world, so I won’t do anything.’ but Sandy and Boni are doing something…now it’s seven girls, then nine, then who knows.”

Friends, family, and co-workers make up the base of attendants this evening.  A little over 100 people pay $50 per dinner seat.  That, plus the auction, as well as an end-of-the-evening appeal for donations brings in several thousand dollars.  A charity golf event, slated for July 21st, will bring in more needed funds.

Considering that LMI owns eight acres of land over in Kenya with a building that houses six young residents with hopes to increase their occupancy, they need every cent they’re offered.  LMI also provides salary for two matrons, three teachers, and a caretaker and boards a pregnant donkey that fortunately works for hay.

Besides working as a program counselor in a group home, Sandy Karanja serves as LMI’s director and program administrator.  She runs LMI out of her home office.  Boniface Karanja who, when he’s not working full-time at SuperValu Corporation, chairs the board of directors and serves as co-director.  The two of them have created a strong community of like-hearted people both here in the United States as well as in Kenya.

While passion for the project is ample, funding has proved difficult.  “As far as government subsidies, we haven’t pursued anything for some time,” Boni tells me.  “Margaret Bailey Foundation has given us a small amount, but it has been hard.  People in Minnesota, they are so good.  We are looking for somebody to come help write the grants.  We try to get people involved, even Kenyans who live in the Twin Cities.  These girls we are reaching in Kenya, they come from all over, including one of the biggest slums in Africa, Kibera,” Boniface adds.

“You don’t know who will be the mover and the shaker [in Kenya] ten years from now,” says Boni, describing the potential impact of LMI’s missionary success.  “It could be one of them,” he says, referring to the girls who receive shelter, nourishment and education at LMI’s mission house.  “We want to make a place of excellence for these girls.”

Money isn’t the only avenue supporters use to facilitate the work of LMI.  Rochelle Kovac, who sits on the board of directors, has traveled to Kenya for short stints in the past.  May 5th she’ll fly to Nairobi via Amsterdam to spend six months working on the property, serving as the program director.  As such, she’ll be responsible for the spiritual training of the girls and staff members  She’ll help manage building projects, interview new girls to join the orphanage, oversee the teachers for the education of the girls, and meet with potential volunteers in Kenya who are willing to assist in helping the orphanage get on it’s feet .  Kovac provides the emotional resources, energy and time needed to further the goals of LMI, however,  “all of my travel and living costs need to be funded through donations,” says Kovac, “I’ll still have my truck payment to make here in the States while I’m over there in Kenya.”

Cathy Fernjack, friend of the Karanjas for the past nine years, is also scheduled to travel with Kovac, but for a two and a half-week mission trip.  “I love kids.  God has placed on my heart a love for children and orphans.  I’ll help however I’m needed,” Fernjack tells me over our catered dinner.  Watching her interact with coos and inviting smiles for our tablemate, eight-month-old Natalie, confirms Fernjack’s passion for children.  When not cuddling the children of Kenya, the short-term missionaries can also expect to do a little landscaping and work on the buildings.

In a country of almost 35 million people, the Karanja’s goals are modest—shelter 80 young girls, provide them with an education as well as a Christian foundation–but in light of the fact that they are doing it all on their own, through sheer willpower and the generosity of others, their present and future accomplishments take on great significance.

Read highlights of Dr. Mumbi Mwangi’s keynote address and a poem she read during the event here.