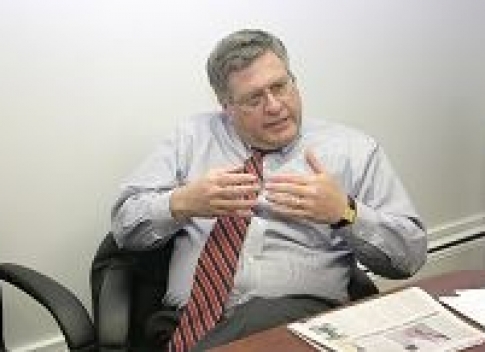 To hear Kenneth Wollack tell it, the United States is doing itself a disservice by not spending enough to spread democracy especially in Africa.

The demand for assistance by civil society in Africa “far outstrips the resources the United States has allocated for such undertakings,” he said.

That is not even to mention the critical need for assistance by nascent institutions that the United States has encouraged the formation of.

Wollack is the president of the National Democratic Institute based in Washington, DC. NDI is a nonprofit that works to spread and strengthen democracy around the world. Mr. Wollack was speaking at the Mshale editorial office when he visited for an interview with the editorial team. He joined NDI in 1986 as executive vice-president and was elected president by the institute’s board of directors in 1993.

Madeline Albright, former US Secretary of State is the current chairman of the NDI board of directors. In its twenty-two year history, the organization operates in 60 countries, 15 of those being in Africa.

Mr. Wollack said that when the United States has invested time and resources in Africa, it has paid off. One particular reward for NDI’s work in Africa that he readily recalls is South African influence on the North Ireland peace talks. Northern Ireland studied closely the South African experience of reconciliation and reaching accommodation.

Asked whether renewed US interest in Africa particularly in Nigeria had anything to do with oil, he paused and said it is natural for a country like the US to focus on some key countries but that should not be seen as disinterest in other countries. “There is a great appreciation of what happens in others (countries),” he said.

Mr. Wollack believes what happens in one country greatly influences its neighbors. When independence came to Namibia in 1990, the success achieved convinced the international community that black majority rule in South Africa will work.

NDI is currently active in a number of African countries. It is assisting Nigeria in a variety of ways as that country prepares to hold elections next year. Among the programs in place is the assistance his origination is providing to the Nigerian parliament in understanding the budget the government presents. The organization is also assisting Nigerian groups inside the country prepare to observe the upcoming elections. Key to this initiative is assisting them in using information technology to adequately monitor the elections.

Such capacity building strategies and the fact that NDI has an internationalized team has made his organization successful in its efforts, according to Mr. Wollack. Among the people who have worked with NDI in the past include the current president of Ghana, John Kufuor before he became his country’s leader.

Africa is a complex place that many people do not readily grasp, according to the NDI president. He believes however that knowledge of African issues is improving albeit at a slower pace than he would like.

“Humility goes a long way (in NDI’s work). We don’t come with all the answers”, he said. According to him, NDI goes only where they are welcome.