Ahead of African Union Heads of State Summit in The Gambia, Host President, Yahya Jammeh, shares views about Africa on ABN-America Show 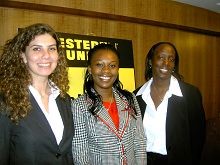 Gitaa Elected to MIC Board of Directors

Swallehe Msuya - July 1, 2006 0
Mshale Publisher, Tom Gitaa, was unanimously elected to the board of directors of the Minnesota International Center during a full board meeting held on June 20.

Mandingo From Liberia Gets Another Chance To Seek Asylum

On May 15, 2006, the United States Court of Appeals for the Eighth Circuit reversed the Immigration Judge’s denial of asylum, withholding of removal, and relief under the Convention Against Torture to Mr. Abrahim Brima Bah, a citizen of Liberia.

Trapeze and aerial hoops accompanied with Moroccan chaabi (pop) hits, a ring of Moroccan scenic backdrops and art transformed a small corner of the Highland neighborhood into mini-Morocco of sorts...

Auma Meja - July 1, 2006 0
Summertime in Minneapolis, a time to change your wardrobe, bring out the mosquito repellent, go fishing, barbequing, cycling, and of course attend the “Annual Redykulass Concert”.

Says invested monies on clients up 1,900%

The African Development Center held its second annual celebration on June 3 to highlight its achievements for the past year. ADC is a community development corporation that assists African immigrants in business planning and ventures as well as buying homes.

New Changes To The Tax Law

The conference, aptly titled: African Women in the Diaspora: Empowering Women, Ensuring Africa’s future presented a diversity of African women. The conference was awash with bright colors, and laughter filled the room reminding one of the liveliness of the African community.
12Page 1 of 2