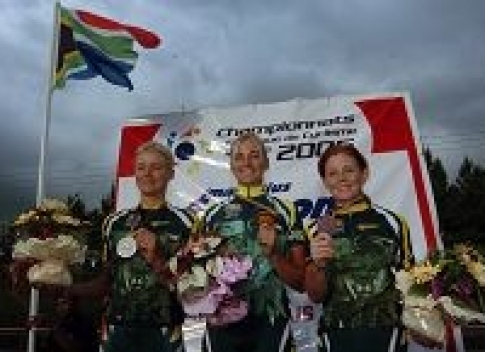 PORT-LOUIS, MAURITIUS – South African cyclist Daren Hill won the African Championship held in the Island State of Mauritius in the south west of the Indian Ocean, on November 10-12.
Deren Hill completed a total distance of 137 kms in 3h27’51” during the tournament. He announced he will soon join the professional American team, the Navigators Cycling Club.
The South-African team proved too strong for the other African cyclists winning the six first places of the men’s race. Deren Hill was followed by Daniel Spence (same time), Robert Hunter, 3h27’58”, Daryl Impey (same time), John LeeAugustyn 3h28’38” and Jay Robert Thompson (same time).
The first Mauritian cyclist Thomas Desvaux came in at 7th place at 3h28’38”. He preceded the Namibian cyclist Erik Hoffman (8th), the Mauritian, Yannick Lincoln (9th) and the Tunisian Hassen Ben Nasr (10th).
“The South African cyclists were really too strong. They were too many”, stated the Mauritian Thomas Desvaux who failed to qualify for the 2008 Olympic Games. He expects to be more fortunate during the Small state world championship due to take place in South Africa in March, next year.
For the women’s race too, South Africa holds a place of honor by winning the first three places. Yolandi Du Toit completed the 61kms race in 1h50’38” to become the African champion. She was followed by Marissa Van Der Merwe in 1h53’06” and Ronel Van Wyk who finished in the same time. Aurelie Halwachs from Mauritius ranked forth. She was followed by Linda Davidson from Zimbabwe, Yosra Saeud from Egypt, Elizabeth Dalais from Mauritius and Marwa Ramadan from South Africa.
“We are very satisfied to have reached our objectives. It was the result of a team work. During the whole race, we didn’t forget our mission: winning the three medals”, Melisa Van Der Merwe told the press. “We were so pleased to have shared the first three places”, added the South-African cyclist.
The Zimbabwean Linda Davidson 38 years old was the oldest woman to participate in the African championship in Mauritius. "I think it was very important to be present in Mauritius", she said.
According the chairman of the Mauritian Federation of Cyclists, Roland Nicolin, and the next African Championship will take place in Cameroon next year.
M. Nicolin stated that Mauritius would like to host the world championship of VTT in 2008. He will make the proposition during the next meeting of the World Federation of Cyclists (Fédération Mondiale des Cyclistes) due to take place in Namibia next year.
On the other hand, a meeting of the International Union of Cyclists (l’Union internationale des cyclistes) was organized in Mauritius on November 7. Its chairman Pat Macquaid said that more races should be organized in Africa. He proposed an African Tour for that. This will motivate the African cyclists, he said. Furthermore, he encourages cycling on all continents.
“Our support will go directly to the different continents. We have already nominated development officers on each continent”, said Pat Macquaid.

Munawar Namdarkhan is Mshale's correspondent covering the Indian Ocean islands in Africa including Mauritius where she is based. She is a reporter with Le Mauricien newspaper in the capital Port Louis.