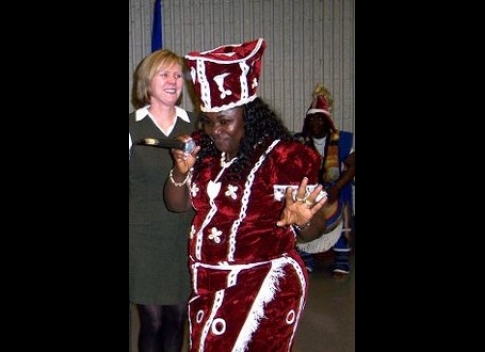 At Kick-off celebration, TRC Commissioner Massa Washington says "The TRC is mandated to investigate human rights abuses in Liberia"
Commissioner Massa Amelia Washington has told Liberians and other nationals that the Liberian Truth and Reconciliation Commission is mandated to “investigate human rights abuses committed during the course of the 24-year period of conflict that plagued the country from 1979-2003.”
TRC’s Mandate
Ms. Washington said he TRC’s mandate includes “investigating gross human rights violations and violations of international humanitarian law as well as abuses that occurred including massacres, sexual violations, murder, extra-judicial killings and economic crimes, such as the exploitation of natural or public resources to perpetuate armed conflicts.”
Commissioner Washington was speaking at the formal U.S. Statement Taking Kick-Off Celebration at the Brooklyn Center Civic Center located at 6301 Shingle Creek Parkway, Brooklyn Center, Minnesota last night (February 24). The program was held under the sponsorship of the Minnesota Advocate for Human Rights and The Liberian Truth and Reconciliation Commission in the United States.
Ms. Washington, who is Chair for the TRC Committee on Diaspora Relations, stressed that her Commission aims to provide “a forum that will address issues of impunity as well as an opportunity for both victims and perpetrators of human rights violations to share their experiences.”
She noted: “The TRC will also investigate the antecedent causes of the Liberian conflict, conduct a critical review of Liberia’s historical past, and adopt specific mechanisms and procedures to address the experiences of women, children, and vulnerable groups and compile a report detailing a comprehensive account of the Commission’s activities, including its findings.”
She said the TRC provides a forum where all Liberians irrespective of their diversity can come together and recount their experiences thus beginning the dialogue towards national healing.
Liberians in the Diaspora
The Commissioner pointed out that the “expansion of the TRC process to include Liberians in the Diaspora cannot be overemphasized, considering the pivotal role of Liberians in the Diaspora particularly the United States in the body politics of Liberia.”
“Liberians abroad have paid their dues”
She accentuated that “Liberians abroad have paid their dues; they have stuck with their homeland through thick and thin assuming various roles at different times in our national history especially in the peace process.”
Commissioner Washington said “the Truth and Reconciliation Commission recognizes the importance of this Diaspora community and has determined that it is given a voice in this all important national process.”
Appointment of Executive Director Nathaniel T. Kwabo
It can be recalled that TRC recently announced the appointment of Mr. Nathaniel T. Kwabo as Executive Director.
Mr. Kwabo, a veteran Liberian human rights activist who resides in the US, holds a Master’s degree in International Peace & Conflict Resolution and in International Relations.
Past Activities, Accomplishments
Commissioner Washington said the last eight months have been difficult and challenging but the TRC has remained on course with the implementation of its two year-three months mandate, despite serious financial and logistical constraints.
She said the TRC was inducted into office by Her Excellency, President Ellen Johnson-Sirleaf on February 20, 2006. Following its induction, Ms. Washington said, the Commission demarcated Liberia into eight operational zones with each commissioner having oversight responsibilities of certain County Territories, Thematic and Operation areas.
Ms. Washington, who has more than 20 years experience as a Print Journalist, enumerated the achievements of the TRC.
Welcoming the gathering earlier, the President of the Organization of Liberians in Minnesota, Martha Tala Sinoe said the inauguration of the U.S. Statement Taking Kick-Off Celebration was important.
She appealed to Liberians to cooperate with the Minnesota Advocates for Human Rights by giving their stories to the organization.
Also speaking was Mrs. Robin Phillips, Executive Director of the Minnesota Advocates for Human Rights. Mrs. Phillips thanked Liberians for showing up at the ceremony, despite the inclement weather.
Mrs. Phillips said it is an honor for her to work with Liberians to help bring about reconciliation.
Also making remarks was the newly appointed Executive Director of the TRC, Mr. Nathaniel T. Kwabo. He called on Liberians to support the Truth and Reconciliation Commission and expressed thanks to Liberians in Minnesota and the Minnesota Advocates for Human Rights for their support to the TRC.
During the program, the audience poised questions to Commissioner Massa Washington, Nathaniel Kwabo and Robin Phillips.
Liberian Cultural Ambassador At Large, Juli Endee, sang a few Liberian songs. She said she had traveled from Liberia to support Commissioner Washington and the Truth and Reconciliation Commission.
The occasion was climaxed with a cultural performance by the Nimely Pan African Dance Company.
Visit the Picture Gallery for images from the celebration.