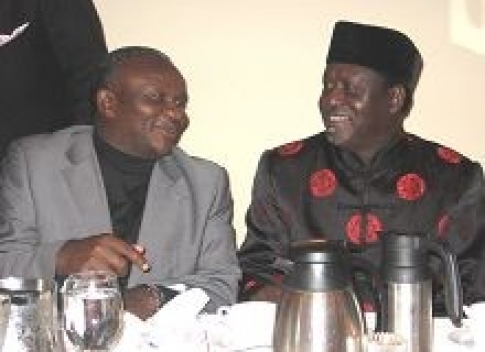 Kenyan opposition leaders have accused the administration of President Mwai Kibaki of enabling the soaring crime rate in the country as it delays issuing national identity cards to eligible youth. This has had the effect of hindering the security forces ability to track down criminals. Leading presidential contender under the Orange Democratic Movement (ODM-Kenya), Raila Odinga made the accusation at a Kamukunji (Town Hall forum) for Kenyans in Minnesota. Mr. Odinga, whose accusations were echoed by South Mugirango Member of Parliament, Omingo Magara who accompanied him on the visit, said the delay in issuing identity cards was part of a grand scheme to disenfranchise young Kenyans and enable president Kibaki to hang on to power.

There has been rising concern in the country on the growing level of violent crime especially in cities and their environs. Mr. Magara, while also attributing crime trends to unemployment mentioned that some young men, without national identity cards, committed serious crimes since they knew that they could not be traced. Mr.Odinga also said that the entire Police force needs to be reenergized and reformed. He argued that because policemen were underpaid some resorted to hiring out their weapons to thugs who end up terrorizing the citizenry.

Change is the new mantra used by Kenyan politicians in their campaign, ODM-Kenya, the leading opposition party hopes to offer Kenyans a different government from that of NARC-Kenya originally a coalition of political parties that ousted the previous regime. Incidentally, most members of ODM-Kenya were  once part of the now ruling coalition government. ODM-Kenya was formed as a result of NARC-Kenya’s leadership failure to constitute a shared government among the coalition members.

Quoting Uganda’s former dictator, Idi Amin, presidential aspirant, Mr. Odinga said of the present Kenyan administration led by President Mwai Kibaki, "We are so fed up." Using soccer analogies to contrast his team with the Kibaki’s administration, he described the latter as one composed of geriatrics as opposed to his which consists of young people. Mr. Odinga said he plays number nine in his team (the striker position).

Only three months after visiting Minnesota, Kenya Presidential aspirant, Mr.Odinga made another fundraising stop in Minnesota yesterday. With the Kenyan elections only eight months away, and the party primaries even sooner (the date has not been set), politicians across Kenya are seeking funds and support from the Diaspora community. In his last visit, Raila, as he is popularly known in Kenya, addressed about eight hundred Kenyans, however, this time only about half that number showed up for the town hall meeting. Organizers attributed the turnout to the heavy snowstorm that pummeled the state over the weekend.

Opinion from the Diaspora

Isabella Marube, a Kenyan living in Minnesota, is hopeful that Raila is the change that Kenya needs. "Raila has been at the forefront of Kenyan politics, fighting for the common man, he has our interests at heart."

”It is important for a government to have checks and balances,” contends Nick Nyasio. "I am confident that ODM presents these with its diverse group of leaders.”

Esther Muchina, who worked on Kenya’s referendum election to change the constitution a few years ago, is a staunch ODM-K supporter. "I am afraid President Kibaki has allowed Kenya to fall further into tribalism. ODM is diverse and will represent all Kenyans."

George Nyabicha, on the other hand, is a little bit more skeptical. "Kenyan politicians are hardly loyal to their cause. They switch from one party to the next whenever they fall out. What guarantee do I have that ODM will not fall prey to this once again? Who would have thought that NARC-Kenya, the party that saved Kenya from the previous regime’s dictatorship would fail us?"

At a dinner at a local hotel, Mr. Odinga engaged with his supporters in his plan for the future of Kenya. Much fanfare was created during an auction when two members of the audience, Ben Muko and Siyad Warsame Ali, tried to outbid each other on what ended up being the highest sale of the night. A keychain with an image of the late freedom fighter and political activist Jaramogi Odinga Oginga (Mr. Odinga’s father) sold for the exorbitant amount of $750 exhibiting the passion of his fans and admirers as both Muko and Ali solicited funds from the rest of the audience. Other items sold at the dinner included orange linen shirts, made by Mr. Odinga’s personal tailor in Abidjan, Ivory Coast and his signed autobiography, Raila Odinga: An Enigma in Kenya Politics. At the time of going to press, it was not clear how much money was raised.

The present administration began in January this year, to further integrate women in the civil and public sector, with a claim of having 30% of women in these positions. Mr.Odinga has criticized the government for making promises of inclusion to women to simply win their vote. Mr. Odinga’s claims are even more ambitious, his government, he promises, will share power equally with women (with women constituting fifty per cent of the civil and public sectors). Akinyi Odinga, Mr. Odinga’s sister who is the Executive Director of the Jaramogi Foundation, after endorsing her brother, wondered why there were no female speakers at the event and called women to action.

The Kenyan community in Minnesota has continued to grow. Like many other members of the Diaspora there is a vested social and economic interest in the political stability in Kenya. A few months ago, a supposed non-partisan organization Kenyan Community Minnesota (KCM) was launched to address the needs of this growing community. Among others things, at its launch KCM Kenyans were skeptical of KCM’s ability to detach itself from political engagement. As a promise to the community and response to this mistrust, a new organization was created– Change for Kenya Raila 2007. It is interesting to note though, that key members of KCM were forerunners in Mr. Odinga’s political campaign. Joash Maangi, KCM Chair, who not only made an appeal for monetary contributions to the Mr.Odinga campaign, but also visited churches in the community to rally supporters maintained that his support was on a personal level and had nothing to do with the functions of KCM. Other leaders for Change for Kenya Raila 2007 include Robert Nyagudi (secretary) and Pastor David Wabwile (treasurer).

In response to this reporter’s assertion that KCM needs to be apolitical and invite several candidates, Maangi assured Kenyans that Presidential candidate, Kalonzo Musyoka has requested a visit to Minnesota, however, no date has been established for his visit.

Visit the Picture Gallery for more pictures from the Raila visit.