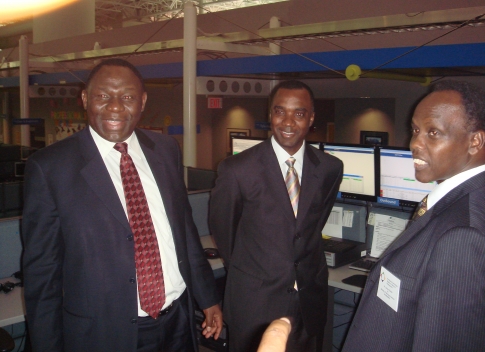 ATLANTA – Dr. Bitange Ndemo, the Permanent Secretary for Information and Communication, today reiterated the Kenya government’s commitment to transforming the economy through information and communication technologies (ICTs). Dr. Ndemo made the remarks when he and the Permanent Secretary in the Ministry of Planning and National Development, Dr. Edward Sambili were given a private tour of the Ryla Teleservices facilities by that company’s President and CEO, Mr. Mark Wilson.

The facility is located about three miles south of Kennesaw State University where an international conference and investment forum on Kenya is being held. The two are part of the delegation that is accompanying Finance Minister, Amos Kimunya to the conference which started yesterday.

Ryla Teleservices, a privately held corporation is a provider of outsourced call center services for corporations. It has already established a call center in Nairobi employing about 300 people with the number set to double in the near future. Some of Ryla’s clients include IBM, Dun & Bradstreet (Mr. Wilson’s former employer) and the T.D. Jakes Ministry. Mr. Ndemo thanked the company for their investment and challenged a few of the Kenyan-American entrepreneurs that accompanied him on the visit to emulate Ryla “if each of you employs 100 Kenyans each back home, you will make a big difference, him (Mr. Wilson) he has done it alone, that is what we want”, he said.

During the visit, the two permanent secretaries, were shown some of the latest technology that the company uses as well as its command center, including a tour of the call center floor. The company employs about 800 people according to Mr. Wilson. Nyambura Kamau, the Consul General at the Kenyan Consulate in Los Angeles was also present.