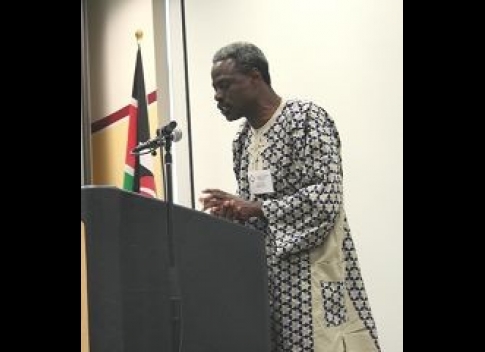 ATLANTA – Unless Kenyans shun the politics of tribe, they will continue to experience severe social and economic problems that still exist more than 40 years after independence, a Fulbright Scholar at Kennesaw State University said.

Dr. Eric Masinde Aseka asked leaders to cultivate and embrace a culture of integrity based on good character. Only then will they be able to earn the trust of Kenyans, he said.

“You can not have integrity unless there is a moral obligation, and with integrity, you get moral authority,” Aseka said, amid applause from an audience of nearly 200 Kenyan professionals and leaders.

Since 1963 when Kenya gained independence, Kenyans have been involved in a political system based on ethnicity. It is not unusual for those in power to fill employment positions with members of their tribes. The practice has caused anger and resentment from tribes that have not held top government offices and led to multiple ethnic-based political parties.

In a bold speech directed at both the government and Diaspora, Aseka told Kenyans that the culture of dividing themselves into ethnic groups placed Kenya at a disadvantage in its attempts to com Kenyan pete internationally. Aseka said that Kenyans should use their neighbor, Tanzania, as a model of a country that has risen beyond tribalism.

“If you compare our sense of nationhood in Africa, Tanzania scores a first,” said Aseka.  “Tanzania succeeded because there was a level of ideological production and leadership engagement of the citizenry on a frequent basis to the extent that a Tanzanian’s perception of humanness and the essence of humanity was raised to a higher pedestal.”

Aseka was giving a keynote address on the first full day of “The Role of the Kenyan Diaspora in Kenya’s Development” convention, which began yesterday at Kennesaw State University. The conference is geared towards encouraging Kenyans abroad to take a greater role in deciding the fate of their country.

Aseka asked Kenyan dignitaries like Amos Kimunya, Kenya’s finance minister who was present, to call for laws making it criminal for politicians to make statements that incite tribes against others.

“It’s these social conflicts that are a recipe for political instability, one of Africa’s greatest problems,” Aseka said.

Politicians were not the only ones with the obligation to end tribalism, Aseka said. Although Kenyans abroad have been condemning ethnic-based politics in their homeland, the Diaspora itself was divided along tribal lines, he said.

In response to Aseka, Peter Ogego, Kenya’s ambassador to the United States said that good governance can not be achieved if educated people shy away from politics.

“Professionals must be involved,” Ogego said. “Otherwise touts and goons will go to Parliament.”