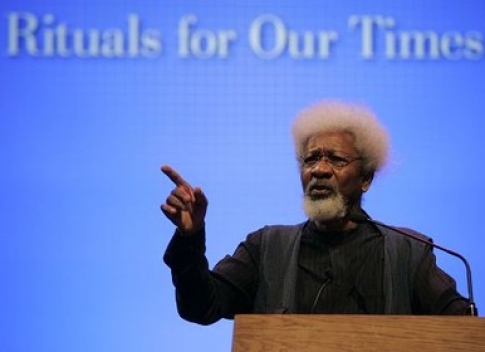 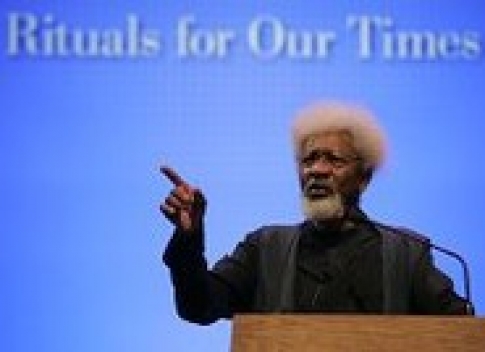 The theatrical national conference that attracted over 700 leading American thespians, poets, playwrights and others, provided a forum for a “provocative mix of plenary, breakout sessions and time for networking” and intellectual discourse among theatre professionals. The highlight of this year’s event was the presentation by Wole Soyinka of his creative publication – Rituals for our Times.

In line with this year’s theme of the national conference of Artistry in a New Century, Wole Soyinka rose above mediocrity as he actively engaged in a treatise that exalted him as a catalyst for social change in our times.  He argued that as we live in a world of both good and bad laws that require constant adjustment to ensure equitable justice for all, creative artists become the vanguards for reflecting on such “rituals” as may be presented as possible remedy for human ills.

Over the centuries, Soyinka argued, mankind has sought for some atonement to redress social ills by engaging in some kind of sacrificial practice calculated to appease the spirits and cleanse society from transgression.

Citing examples of human injustice and other calamities including genocide in Rwanda, military dictatorships in his native Nigeria, atomic bombing of Hiroshima, perceived wars against weapons of mass destruction (mass deception?) bird flu, Tsunami and the like; he said our world is full of such calamities. “Just like you have many inscriptions on our T-shirts,” he ventured, adding – mankind has looked for rituals to ensure a correct balance of things in our lives and sought to uphold principles of social justice for all.

In places where mankind has been overwhelmed by tragedies and catastrophe, like in Sierra Leone, Liberia, the Congo, Rwanda, Darfur – mankind tends to look for an outcast, an outsider scapegoat for crucifixion in the style of Jesus to atone human suffering.

In his analysis, all actions designed to influence and alter the state of affairs in society, including political social exercises, assume ritual dimensions. He said leaders like Louis Farrakhan of the Nation of Islam and the famous Million Men March; abolition of slavery to fight assumed white privilege, all these have led to rituals of declaring a universal day-of-atonement.

The United Nations Universal Declaration of Human Rights, the declaration by state leaders of national days of mourning or national prayer in the face of great calamity or gross economic failure are the rituals of our time, he submitted. By and large, Soyinka argues, mankind goes through a process of adjustment, adjudication and arbitration to address social ills in an evil society.

In quoting an African witty proverb that says that if a duck is beyond sacrificial reach then a pigeon can be used instead Soyinka contends that this proverb demonstrates that Africa’s wisdom goes a long way to corroborate the universality of rituals in human history. This suggests the meeting of the minds of various global cultures on matters of rituals.

Soyinka: early Christian missionaries in Africa brought the Bible to Africans and while “we were busy studying it, we woke up to find our land gone.” Struggles have resulted in mankind’s attempt to fight social injustice, decadent laws, oppression, and tyrannical regimes in the process human bonds stretching from North to South and from East to West have evolved in search of universal human rights.

A lively debate followed in which workshop participants were able to share ideas on the role of theatre as a way of reaching out to influence social and political change in our never-ending search for answers to the many ills that have plagued humanity for centuries.

Answering a question from a member of the audience about information flow in our current world of information technology as a modern human tool, Soyinka praised the internet as a commendable and powerful tool of communication. However, he cautioned that this new technology is both a blessing and a curse and caused laughter when he suggested that “the man who invented the internet deserves a Nobel Prize but after that he should be hanged in a public garden”!

Wole Soyinka was born in Abeokuta Nigeria in 1934 and received his University education at the University of Ibadan (Nigeria) before proceeding to Leeds where he earned his BA in English. He was employed by the Royal Court Theatre of London as script reader, actor, and director (1957-1959) before returning to Nigeria in 1960 where he founded a theatre company known as The Masks.

He has served as Director of Drama School at Ibadan University (Nigeria) and head of Theatre Arts at the same university before joining the University of Ife (Nigeria) as head of the department of Dramatic Arts. He has written many novels and books of drama and poetry rising to be the first African writer to earn the prestigious Nobel Prize in Literature.

Some of his known works include Kongi’s Harvest, The Lion and the Jewel, and The Trials of Brother Jero. In his artistic works, he has successfully satirized the absurdities of his society creating political enemies from dictatorial leaders, landing him in jail twice in his native Nigeria.

TCG is engaged in the mission of strengthening, nurturing and promoting professional not-for-profit American theatre and offers career development programs for artists. The group also offers an opportunity for advocacy through dramatic literature to provide timely alerts about legislative change.

TCG is on record to have supported cross-cultural exchange through travel grants and other forms of assistance to traveling theatre professionals serving over 440 member theatres nationwide.

According to Phillip Matthews, TCG Director of Communications, the not-for-profit arts and culture segment of Minnesota society is an estimated $ 838.5 million industry that supports 22,095 full-time jobs and generates $ 94.1 million annually in local and state government revenue.