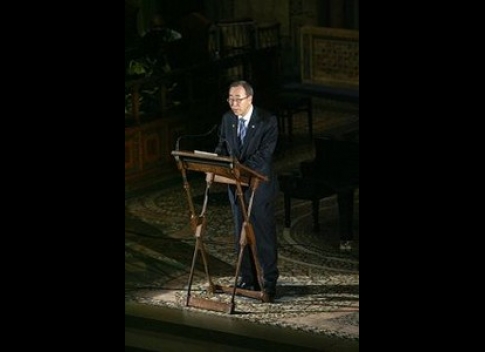 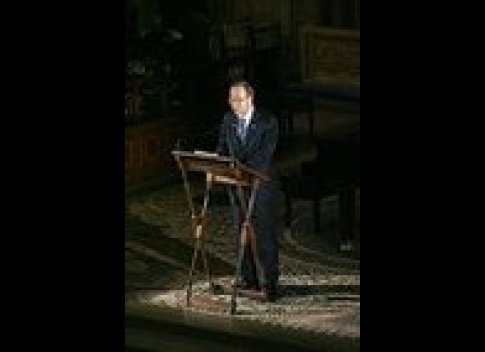 Calling AIDS “a disease unlike any other,” Secretary-General Ban Ki-moon stressed the need for strong leadership in a number of areas.

“Without it, we will never get ahead of the epidemic,” Ban said.

While “tangible and remarkable” progress has been made in a number of areas, including reducing infections and providing care, Ban emphasized the need to do more on several fronts.

“It is our crucial mission to ensure that everyone can access HIV prevention, treatment, care and support,” he said, recalling the pledge made by all Governments last year to work towards universal access by 2010.

In addition, Ban called for renewed leadership in eradicating stigma associated with HIV, which he termed “the singlebiggest barrier to public action on AIDS” and one of the reasons why the epidemic continues to wreak its devastation around the world.

The Secretary-General also emphasized the need for leadership among Governments in fully understanding the epidemic, so that resources go where they are most
needed. In addition he pledged to ensure that the UN becomes a model in responding to the virus.

“As Secretary General, I am determined to lead the United Nations family in this endeavor – to ensure that we prioritize action on AIDS, to encourage Member States to keep the issue high on national and international agendas, and to work to make the UN a model of how the workplace
should respond to AIDS,” Ban said.

Dr. Peter Piot, the executive director of the Joint UN Program on HIV/AIDS (UNAIDS) said the challenge now is to keep AIDS at the top of the agenda, and to accelerate slackening of leadership would be fatal.

“The epidemic reached global proportions precisely because it took so long for the world to act,” Dr. Piot said. “And although we are beginning to make progress, there remains a long way to go.”

Citing a serious shortfall in resources for AIDS, and prevailing stigma and discrimination around the disease, Dr. Piot noted that two-thirds of those who require antiretroviral treatment are unable to access it.

“Less than one in ten people at risk of HIV infection have the means to protect themselves,” he said. Dr. Piot stressed that sustaining leadership and accelerating action on AIDS isn’t just an imperative for politicians.

“It involves religious leaders, community, youth and council leaders, chief executives and trade union leaders. It involves people living with HIV, and their families
and friends. It involves you, me – each and every one of us – taking the lead to eliminate stigma and discrimination, to advocate for more resources to tackle AIDS,” he said.

In her message to mark the day, Louise Arbour, the UN High Commissioner for Human Rights stressed that the first and primary leadership call is for Governments to step forward and provide the basic human rights guarantees necessary for HIV to be overcome.

The commitment by Governments to achieving universal access to HIV prevention, treatment, care, and support by 2010 was not only an ambitious goal, “it is also a human right,” Arbour said.

To achieve this goal, she called for action on several fronts, including ending the discrimination against people living with HIV and supporting them to become strong,
active players in determining policies and programs that will prevent further infections and provide treatment.

In addition, she stressed the need for Governments to care for the most disaffected and marginalized groups, even those who engage in activities that may be illegal in some countries.

“Sex workers, prison men, and injecting drug users must have their human rights respected and protected, including rights to health, non-discrimination and freedom from violence,” she said. “These people are amongst the worst affected in the pandemic, yet their rights are disproportionately violated.”

Highlighting the leadership role played by the General Assembly in raising awareness of the issues surrounding the epidemic, President Srgjan Kerim noted that
the 192-member body will hold a meeting next year to take stock of and speed up the implementation of global commitments to combat HIV/AIDS.

Kerim also drew attention to the fact that the disease remains a major challenge for many countries, particularly in sub-Saharan Africa.

“Eight countries in Africa now account for almost one-third of all new HIV infections and AIDS deaths globally,” he said.

“Every human life lost to AIDS is a tragedy when knowledge and resources have made it possible to prevent these deaths.” In the lead up to World AIDS Day, UNAIDS worked with the UN Office on Drugs and Crime and the World Bank to produce “HIV and Prisons in sub-Saharan Africa: Opportunities for Action.”

While it is well known that sub-Saharan Africa has been hardest hit by the epidemic, little is known about the prison community and HIV, the three agencies said in a joint communiqué.

The new document summarizes what is known, identifies gaps in information and proposes ways forward to address this underserved population within the context of the HIV/AIDS response in the region.

The United Nations Children’s Fund (UNICEF) has announced that its Goodwill Ambassador and tennis great Roger Federer will star in a World AIDS Day public service announcement to raise awareness about the transmission of HIV from mothers to their children.

Federer is among several celebrities lending their voices to the Unite for Children, Unite against AIDS campaign, launched in October 2005 by UNICEF and UNAIDS to draw attention to the impact of the disease on children and young people.