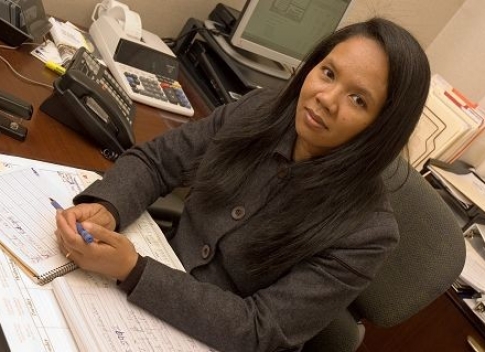 “I had the opportunity to go to college and after I graduated I asked myself, ‘Did I go to school to stay home?’” Ravelomanantsoa says. “I didn’t spend all those sleepless nights preparing for exams only to stay home.”

So she embarked on a journey to become a professional woman in Madagascar, although she knew that it was going to be difficult to thrive in a workforce dominated by men.

It didn’t matter that she was highly educated, with a Master’s degree in Economics from the University of Paris X Nanterre, France. But she did land an internship at a bank and hoped that it would lead to a successful career in the financial institution. That was before she learned that she may never get ahead because she didn’t come from an influential family.

“You know how it works,” Ravelomanantsoa says. “You have to be the daughter of or the son of, to get a real chance. Being a woman in a finance environment was really challenging.”

But she got her chance far away across the oceans from Madagascar, in the United States. In 2000, only a year after Ravelomanantsoa came to America, she got the opportunity to work at a US Bank branch on Lake Street in Minneapolis. But having faced discrimination back home, she was shocked that the bank had given her a job.
“I had people who thought I was worth a shot, but I thought maybe they were too desperate and said, ‘Let’s hire her,’” she says, laughing. “It’s true; America is still the land of opportunity. I didn’t anticipate getting a real chance.”

But getting a job at the bank was only the beginning of her challenges. Eight years ago Lake Street was not the place it is today. Ravelomanantsoa remembers coming to work at 7:30a.m everyday and seeing prostitutes still making their rounds on foot. During the day, petty drug dealers paced up and down the street.

“When I started in the area what I was told was, ‘That’s Lake Street. That is a scary place. What are you doing there?’” she recalls.

But Ravelomanantsoa saw the area as a place where she could grow as professional in the financial sector.

“From the very beginning I felt like I was at the right place,” Ravelomanantsoa says.
Indeed, she was at the right place because in 2005 the entire Lake Street area began to undergo its biggest facelift in 50 years. It has now become one of Minneapolis’ fastest growing and most diverse business districts. The area is also home to Midtown Global Market, where you can buy anything from Middle Eastern food to Ecuadorian jewelry. There are now businesses ranging in size from Latino bodegas and Somali food stores to large corporations like the Sheraton Hotel.

So when Wisconsin-based M&I Bank decided to join the new businesses that now call Lake Street home, Vice President Lynn Groll could not think of anyone more qualified than Ravelomanantsoa to launch the project.

“Felicia is someone who really gets it,” says Groll, who worked at US Bank with Ravelomanantsoa before leaving for M&I. “She is a professional who has love and passion for the community. She educates people to make sure they understand what they are signing for before they open an account.”

Groll offered Ravelomanantsoa a job as an assistant vice president and gave her full responsibility to bring M&I to Lake Street.

“I felt very useful when M&I contacted me,” Ravelomanantsoa says.

She had never opened a branch before, but she liked the idea and left US Bank to take on the new challenge. Even more enticing was that M&I was going to erect a brand new building to house the bank.

“To really start from the ground ” Ravelomanantsoa says, leaning forward on her chair and slightly changing the tone of her voice to relive the excitement. “We did the groundbreaking, we did everything here.”

Amazingly, Ravelomanantsoa, who is also the branch manager, learned that M&I was going to give her the liberty to tailor the branch for the ethnically diverse neighborhood in order to carry on her vision of making sure immigrants understand the workings of financial institutions. That is something that lacks in many banks, as they do not usually take into consideration the cultural background of their clients, she says.
“For example, the African population is not very familiar with banks,” Ravelomanantsoa says. “Back home we didn’t use banks because sometimes your money disappeared.”

She says that because many Africans come from countries where most business is done with cash, it makes it harder for them to understand how banking and services like credit cards and loans work. That leads to people paying a lot of fees to banks because they did not understand what they signed up for.

“Africans get here and they get thrown into new accounts because when you work you have to have direct deposit,” she says. “So they open an account and they don’t know how it works. That often leads to fees, misunderstanding and frustration. It is so important to educate the population so they are ready.”

To show that her bank is serious about making sure people in the community understand what they are signing for, Ravelomanantsoa hired multilingual employees. In addition to English, eight different languages (Somali, Malagasy, Spanish, Portuguese, Bulgarian, Italian, Russian and French) are spoken at the branch – incredible for a small building that, if it wasn’t for the M&I Bank logo, one might easily mistaken for a fast food restaurant.

“I have always been involved in this community and that is the reason I really love to work on Lake Street,” Ravelomanantsoa says, looking out her office window to the street. “Even though people say that it is a really bad place, it is because they don’t know how it has changed.”

Ravelomanantsoa is now working with African Development Center, a Minneapolis-based business development agency, as part of her efforts to reach out to the greater African community in Minnesota. ADC is the only organization in Minnesota that complies with Muslim lending laws and has helped a lot of small entrepreneurs start businesses.

Remarkably, Ravelomanantsoa has reconciled the expectations of her African upbringing and those of her education. She is a 38-year-old, highly educated bank executive and married mother of two children aged 13 and six.

“I’m just like any other mom,” she says. “After work I check on their homework, I cook dinner, and put the kids to bed.”