President-elect Joe Biden on Monday made two historic appointments as he prepares to take over the White House. Biden announced the nomination of Janet Yellen as his Treasury Secretary, making her the first woman to hold that position if confirmed. Biden also named Adewale Adeyemo as his nominee for Deputy Treasury Secretary. Adeyemo will become the first Black person to serve in that role and the highest-ranking African immigrant in the Biden-Harris administration, and possibly in any administration thus far.

39-year-old Adeyemo who goes by Wally was born in Nigeria. He currently serves as the Obama Foundation president. He moved to the United States with his parents when he was just “a baby,” according to the New York Times. He grew up in Southern California where his father was a teacher and mother a nurse. Adeyemo and his two siblings, a younger brother and sister, grew up sharing a two-bedroom apartment. 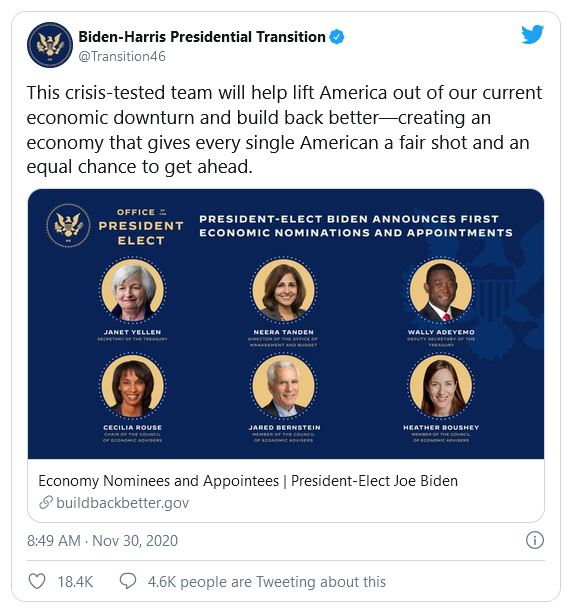 Prior to joining the Obama Foundation, he had been president Obama’s senior international economic advisor after Obama had appointed him deputy national security advisor and deputy director of the National Economic Council. In that role, he was responsible for coordinating the policymaking process on international finance, trade and investment, energy, and environmental issues, according to a profile of him by the Center for Strategic & International Studies, a Think Tank that he advises.

Adeyemo received his undergraduate degree from the University of California at Berkeley and a Juris Doctor from Yale Law School.

“This crisis-tested team will help lift America out of our current economic downturn and build back better—creating an economy that gives every single American a fair shot and an equal chance to get ahead,” the Biden-Harris transition team tweeted after Biden announced the members of his economic team.