Home Entertainment The Jeli in the Midwest: Toumani Diabate 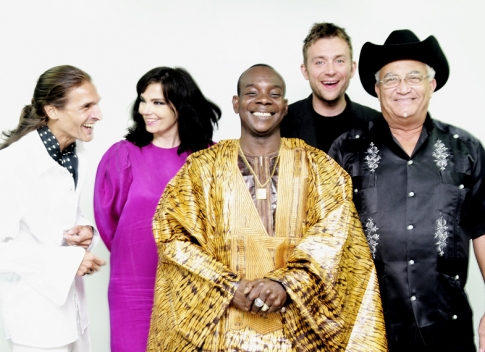 It may strike many people as odd that a musician as world renowned as Toumani Diabate has only recently released his second solo album. It’s even more perplexing when you find that his first solo album was his debut at the age of 21 entitled “Kaira”, released in 1988. Now, you may think he took some sort of a hiatus in that twenty year period to tend to matters other than making music on the kora. You could be excused for thinking that if you know nothing about the history and background of this cherished native of Mali.

You see, Toumani Diabate was born in Bamako, the capital city, on August 10, 1965 to Sidiki Diabate and Nene Koita. His father is considered the greatest kora player in recent memory and his mother was a famous singer. Now, throw in the fact that Diabate is the 72nd generation in a lineage of kora players spanning the last eight centuries, and you begin to appreciate the infinite musical entity that is Toumani Diabate.

The answer to what he has been up to over the last twenty years would include forming and touring with his 50-man strong Symmetric Orchestra band. Along the way, he has collaborated on albums with many musicians including diverse music greats such as Taj Mahal, Bjork, and the late Ali Farka Toure.

Luckily for us, he found time to haul his enormous, ornately designed, 50 year old kora to our doorsteps at The Cedar in Minneapolis to give us a taste of West African sunshine on a rather frigid Thursday evening in November. It was to be as much of a masterpiece in solo musicianship as I have ever seen.

“Hello new America,” was his greeting to the highly expectant crowd, which was met with great applause. He was very humble in his introduction and came across a very spiritual man. Once he began playing the first song, there was a palpable sense of the crowd being gradually enraptured and seduced by his instrument. He played with his eyes closed as if in trance; to focus on visualizing a place to take us musically, while his head swayed with the music. His fingers seemed to move at sonic speed as they picked at the strings. It was amazing to all the plethora and complexity of sound that he produced from his kora.

The kora is a harp-like instrument constructed from half a gourd of calabash with 21 strings of fishing net attached to a notched stalk much like a guitar. The gourd area is clothed in cow hide to provide resonance. It is played with the thumb and index finger of each hand only; mastery of the kora requires not just years of training, but also skill. Toumani Diabate is regarded as the best living exponent of this art.

Much of his material on the night was taken from his recently released album, “The Mande Variations.” It is worth noting that most of the songs were barely recognizable to me although I was quite familiar with the music. This was so because kora music is more of an art of improvisation than anything else and very rarely is a composition played the same way twice. I could always make out the melody, but then he would depart from it as he ventured on a progression of rhythms that seemed to build on each other and yet always held on to an existing theme.

One highlight of the evening was the song, “Ali Farka Toure,” a tribute to the late Malian blues man. The mention of Toure’s name in the introduction of the song caught the crowd on fire, and at its stunning end, gave rise to a standing ovation.

This was to be a memorable night for all present, and especially so for Ryan Skinner, an American who had studied playing the kora under Diabate for several years in Mali. They both spoke about their relationship and referred to each other as “brother.” The only thing more endearing than their journey together was their first ever performance together, which was to serve as the finale to the show.

In Mali, most kora players are griots called Jeli. They inherit the duties of being historians and storytellers tasked with passing on old adages and traditions to future generations through song. They journey endlessly to perpetuate the culture. Toumani Diabate traveled far off the beaten path to leave us with some inspiration through his timeless music, and in gratitude, we can only wish him safe passage to his next destination.