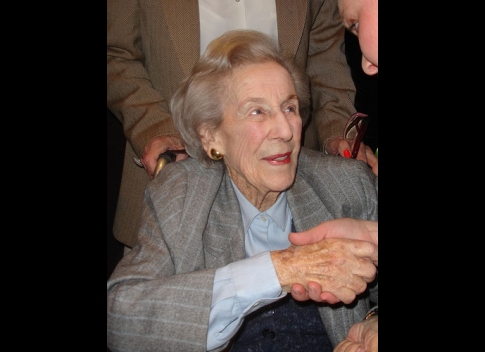 Anti-apartheid activist Helen Suzman died on New Year’s Day at the age of 91. As accolades from around the world pour in, news reports also mention the controversy she sparked on college campuses in the late 1980s.

I’ll say. At my alma mater in Connecticut in 1989, we almost rioted when we heard Suzman had been invited to speak — a fact that, today, fills me with contrition.

Suzman, who helped found South Africa’s liberal Progressive Party, was for 13 years the lone voice against apartheid in the South African parliament. She spoke out fiercely against racist legislation, and frequently visited anti-apartheid activists, including Nelson Mandela, in the nation’s notorious prisons.

So what was our beef with Suzman at Wesleyan University, a small liberal arts school in Middletown, Conn.?

We and other campus activists were incensed that Suzman opposed economic sanctions against South Africa. Nor did she favor the divestment movement, still going strong in the late 1980s, which pushed colleges and municipalities to relinquish their financial holdings in companies that did business in South Africa.

Suzman argued that such actions were counterproductive and primarily hurt black South Africans.

We didn’t care that Suzman met with imprisoned leaders of the freedom movement; she obviously wasn’t listening to their nearly unified calls for sanctions. We thought she should resign her ineffectual post in an inherently racist system. And we were convinced that the university chose her to speak as a way of bolstering its refusal to immediately divest.

Fair enough, I suppose, except for the conspiratorial part. But what followed the announcement of her impeding campus speech was despicable.

In the days before Suzman’s arrival, campus radicals started a smear campaign in the university’s alternative press. I remember editing articles that attacked Suzman, of whom I had never heard. Quotations of Suzman’s own words, which I and other politically motivated editors never fully checked, made her sound downright racist.

When the day of Suzman’s speech finally came, many students couldn’t fit into the campus cinema where she was scheduled to speak. So we demanded a larger venue — we made a lot of “demands” in those days — and eventually a crowd of about 300 marched across campus to the chapel. There, black students from Wesleyan’s Malcolm X House lined up behind Suzman, who stood at a podium; they and others in the crowd hissed derisively (and some applauded) as she defended her views on sanctions.

And defend herself she did. Suzman had read everything written about her in the in the days preceding her talk. By reading aloud the complete text of her selectively quoted remarks, Suzman revealed a propaganda effort by left-wing students that would have made Joseph McCarthy proud.

She then read a letter from Nelson Mandela, written to her the year before and reprinted the following day in the largest campus paper. Mandela, writing from Victor Verster Prison in Paarl, began “Dear Helen,” and continued:

“The consistency with which you defended the basic values of freedom and the rule of law over the last three decades has earned you the admiration of many South Africans. A wide gap still exists between the mass democratic movement and your party with regard to the method of attaining those values. But your commitment to a non-racial democracy, a united South Africa, has won you many friends in the extra-parliamentary movement.”

Mandela wrote that he hoped in the future Suzman’s voice “will be heard throughout the country free from the constraints which parliamentary convention imposes.” He closed, “Fondest regards and best wishes to you and your family.”

In the end, in a question and answer session after her talk, Suzman made mincemeat of most arguments for divestment from the campus left. She was like a lion. She destroyed us.

The Nelson Mandela Foundation this week called Suzman a “great patriot and a fearless fighter against apartheid.” The African National Congress lauded her as “a thorn in the flesh of apartheid.”

Perhaps there’s still room for cynicism with respect to the life of Helen Suzman. Certainly many of the world leaders lauding her now did their part to forestall democracy in South Africa while she lived. Obviously a huge number of black South Africans did as much or more, at far greater risk to themselves, to end apartheid; yet most will never be known to the world at large.

One could even point to Mandela’s carefully worded letter, wherein he never explicitly states his own opinion. Perhaps her positions angered him, and his hospitality was strategic. But perhaps he deliberately, personally withheld judgment of Suzman and her tactics. A man of his wisdom likely knew how little we know of our power and its effect in the world.

Regardless, he remained polite, and kind.

History suggests that Helen Suzman was wrong to resist the economic isolation of South Africa during apartheid. But it suggests more strongly that she did far more help than harm to the nation’s freedom movement. How many of us, in her shoes, would have acted similarly?

Helen Suzman, Nelson Mandela and the passage of time have taught me a little about dignity, humility and honesty — and how quickly activists of all stripes will trade these away in moments of self-centered, self-righteous zeal.