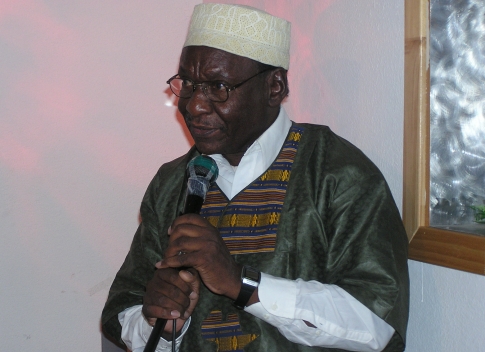 On Sept. 23, a health care worker found Tanzanian-born journalist Swallehe Msuya dead in his Minneapolis apartment. Swallehe had failed to show up for a kidney dialysis appointment scheduled the day before. He was 61.

I first met Swallehe when I moved to Minneapolis in July 2007 to be the editor in chief of Mshale, a newspaper for African immigrants.

The first thing I did as the editor was schedule a meeting with writers.  Because of its small size, Mshale heavily relied on freelancers. Most of them had full-time jobs and only wrote because they were passionate about covering the African immigrant community. Their jobs meant that I could not get the dozen or so writers in a single editorial meeting, so I had to meet them individually.

Tom Gitaa, the publisher, had told me that Swallehe was nearly 30 years older than me. That made me nervous, because in our culture it can be awkward to manage someone older. Back in my warehouse days I worked with two older African men, a Kenyan and a Nigerian, who refused to learn anything from me because I was “too young.”

Swallehe walked into the newsroom dressed – as he always was – in traditional Tanzanian attire.

“Welcome to Minnesota, young man,” he said in Kiswahili.

As I was trying to figure our how to start asking a man old enough to be my father questions, Swallehe saved me the agony and began to interview me instead. Why would a highly educated young man come to such a small newspaper? How old are you? Are you married? Why not? You are not religious? Why not? He tells me I am going to have hard time finding a woman because most Kenyans here are religious.

I answered all his questions, careful not to get into any details that might extend my time on the hot seat. When he was satisfied, he began to tell me about himself. He came from Tanzania in 2003 for treatment for a kidney ailment. He was a devout Muslim. He liked the idea of a newspaper for African immigrants. He proposed a monthly column in addition to his reporting.

That column came two months later. He named it “African Prestige.” In his articles, Swallehe repeatedly called on Africans to discover their intellect and unite for a better continent.  He described himself as “as a committed son of the soil, who sees Africa’s future success emerging only from the formation of continental unity and economic integration.”

On global warming he urged Africans to join “the global coalitions addressing this important issue, as it is our planet and our lives that are at stake.

What did Swallehe think about the exit of British Prime Minister Tony Blair? “Although I won’t miss Tony Blair’s policies toward Africa,” he commented, “I shall forever miss the witty verbal heavyweight bullfighter, whose debates generated great drama and excitement in the House of Commons.”

Swallehe also loved to make his readers laugh. He was “as old as the state of Israel.” And my favorite: “Next time you are asked who discovered the mighty Kilimanjaro, Africa’s highest mountain, tell them that [Swallehe’s] great-great grandfather, Kimborido Kasei Righiria, born and raised at the foot of the mountain, lived with it before any white explorer set eyes on it. Give him credit for that!”

Editing Swallehe’s column often left me wondering how a man who knew his health was deteriorating could be so full of hope for Afriaca.

“Even as he underwent treatment he continued to selflessly give, and would be among the first ones to avail himself for an assignment,” Tom Gitaa, the publisher of Mshale, wrote in a statement.  “Sometimes he would get mad at me that I did not call him for assignments out my consideration for his dialysis schedule.  ‘Do not assume. You call me first and I will tell you myself if I cannot go,’ he would shout over the phone always in a good-natured way.”

That was the Swallehe I knew.

What I didn’t know, though, was that he lived alone. When I think about him dying alone, I’m reminded of the “cultural erosion” he often wrote about. (“Those African names with historical meanings, and our languages that define who we are or where we come from will slowly disappear.”)

But this “cultural erosion” is nothing we Africans are in control of. We are in America, where the needs of the individual trump those of community. America will give you a better life than you led in the old country, but take away the best of you.

It is even harder if you are aging and sick, as Swallehe was. It is true that – relative to Tanzania – Swallehe received better medical care here.  But the “cultural erosion” in what Swallehe once called “this great nation” stripped him of the dignity Tanzania might have accorded him. Living in America meant that he had no one there to monitor his health and perhaps get him to the hospital sooner. And it meant that Swallehe had no one present to hear his last words of wisdom.