Home News Kenya’s Ann Njogu, is a “Woman of Courage” 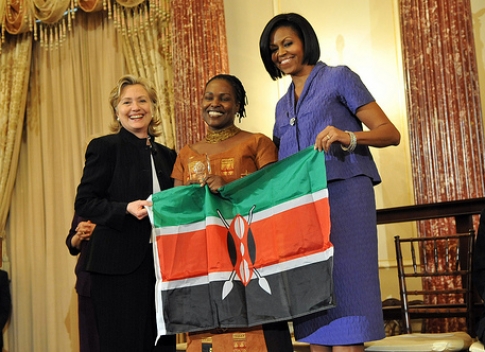 Washington  – There were three times Ann Njogu considered quitting her work in human rights activism in Kenya. The first was when a woman walked into her office so badly beaten by her husband that her head and face were swollen to the size of a huge pumpkin. Njogu and her organization successfully had the husband arrested, only to have the woman’s mother drop the charges when the community threatened to burn down the mother’s house in retribution.

As part of this effort, Njogu’s other organization, Africa Community Development Media, is committed to spreading community-based radio stations to each of the 210 parliamentary constituencies in Kenya so communities can generate their own media and determine the issues that are important to them. “Unless the people are equipped with all the information they require, and they need, to make the right decisions,” said Njogu, “they’ll never be able to shake off the shackles of oppression.”

Like many other human rights advocates around the world, Njogu has paid a high price for her activism. She has been harassed and arrested, including in 2008 when she was sexually molested by the police who were beating and arresting her. Though she had worked in the field of sexual violence for years and seen countless travesties, Njogu’s reaction was no different from that of any other woman in that situation: “I wanted to die. For three months, I cried every day.”

Njogu picked right back up with her work. She is quick to point out, however, that it is not that she or any of her colleagues lack fear, “we still felt the fear, but continued to do it anyway because it was the right thing. We understand that it is our duty, and that of our generation, to replace the present despair with a new hope.”

Despite everything she has been through, that hopefulness is one of the most striking qualities about Njogu. “In Africa and in Kenya we have all the resources,” she says. “It’s only that we have the wrong priorities, the wrong leadership to direct those priorities, and the levels of corruption that make it impossible for that potential to be realized.” She often speaks excitedly about a new generation of Kenyan leaders committed to ethics, merit, service and accountability striving to bring about national transformation and not “sedation through welfare.”

She also highlights the importance of continued international attention to issues in her country. In response to a question about how American women and organizations could provide support for her work, Njogu replied: “When you speak up, our government listens. When you activate your networks, that is awesome.” As one example, she credits the letters written on her behalf from all over the world as instrumental in securing her release from prison.

At her core, Njogu has faith that individual efforts and individual choices made at the grass-roots level will transform Kenyan society and mitigate the entrenched inequalities; that information generated through community-owned and -operated radio outlets will empower people to make the best decisions for their communities; that informed citizens will elect leaders who stand for good governance and condemn corruption. “The time for change has come,” Njogu states confidently, “and there’s nobody that’s going to stop that kind of change that is brewing across the country.”