Home News Liberian Peace Activist: “……the price for not getting involved, threatening” 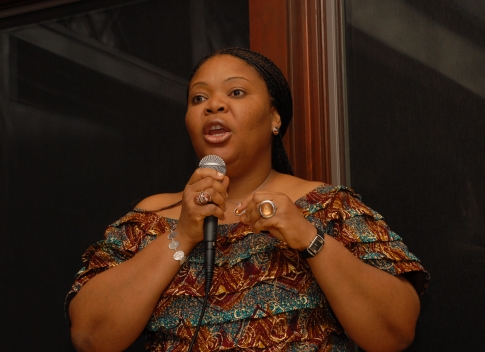 Leymah Gbowee was in Minneapolis on Saturday, March 6th at the Coffman Memorial Union where she gave the keynote speech for the 15th annual International Women’s Day celebration hosted by The Advocates for Human Rights and the Human Rights Program at the University of Minnesota. The event was themed “Inspire. Act. Change!,” and included a keynote address, workshops, film, and performances.

Organizers shared a teaser of the film, “Pray the Devil Back to Hell,” a powerful documentary on how Liberian women brought an end to a devastating civil war and reclaimed their country. Following the short viewing, Gbowee took the stage.

Gbowee, part of a delegation of women whose tenacity and energy inspired the 2008 film that attempts to reconstruct this account through interviews and footage from the war and beyond, was 17 years-old when the conflict broke. She found herself restless and broken by war and joined the Women in Peacebuilding Network (WIPNET).

“The price of sitting was getting higher… the price for not getting involved threatening,” she shared as she spoke on the catalytic events that ultimately lead to her organizing efforts in Liberia. She and others worked toward three demands: an immediate ceasefire, negotiation among disputing groups, and a viable settlement.

“In previous peace efforts, women would advocate for peace and then they dance, celebrate, and go back to cooking.”  Wanting something more sustainable, they began an aggressive campaign that attempted to engage women in various elements of the civil society.

When proposals were submitted, knowing that many women were either too busy to read the entire piece or were otherwise illiterate, the delegation sat down every night and read one page, and then simplified and distributed the information to better inform community members. They set benchmarks, and organized to involve rural women, an often ignored population in the political process. They soon became heavily involved in the disbarment process of their sons and collected weapons, often breaking barriers of disengagement that split communities.

“When we were walking down the street people thought, ‘these women have swallowed the madness that is around then.’” Despite the gossip, dismissive diplomats, and the burden of a nation at war, the women proceed to organize an intensive community mobilizing campaign that sought register women 15 days prior to the deadline. They worked to strategically engage with women in a way that works for them. The delegation members helped other women cook, wash clothes, mind the shop, and other routine activities that would otherwise prevent some from registering. They registered almost 500 women, which was 50 more women registered to vote than men. “We were telling the international community that were we serious and that wanted to be involved,” Gbowee said. By successfully implementing this campaign and others, the women made a profound statement that they had the power to inspire, act, and change. This movement ultimately lead to election victory of Ellen Johnson Sirleaf, the first female president in the African continent.

As a result of this strategic engagement and diligence, they began to deconstruct structures of patriarchy and found huge successes that did not end after they achieved peace. The group moved on to reform laws that were unfavorable to women, including one particular law that only identified rape was only in instances of gang rape. They worked with female lawyers to change this law, and according to Gbowee, is one of the strongest rape laws in Africa – a crime that results in a 12 years to life in sentence without parole. The delegation of women also worked to give legal rights to women in rural areas and their children, as polygamy is practice but it is often the case that the wife in the rural area would be denied rights.

Gbowee cofounded the Women Peace and Security Network in Africa, an organization that seeks to enhance women’s participation in the civil society. The initiative grew from her work as an organizer and peace activist in Liberia. While her efforts in Liberia fueled a movement to involve women in all components of the civil society, her work has had a ripple effect across the African continent and beyond.

In her final comments, she challenged Africans in the audience, urging the diaspora in the United States, and particularly those from conflict-ridden societies like Sudan, the Congo, and Somalia to find a footing in America, as those back home depend on them for support and leadership.