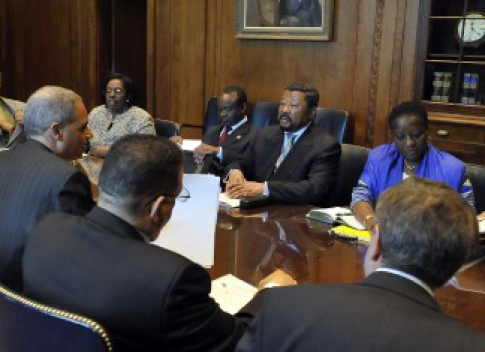 Deputy Secretary of State Jacob Lew welcomed the AU delegation, headed by the chairperson of the African Union Commission, Jean Ping. The three-day session will include visits by the delegation to other U.S. government departments and talks with Cabinet officials such as U.S. Attorney General Eric Holder, Health and Human Services Secretary Kathleen Sebelius and U.S. Trade Representative Ron Kirk. Plans call for the meeting to be held annually.

Welcoming the delegation, Lew said the United States is “excited” to host such a meeting with the AU to discuss common priorities for Africa and ways to strengthen the U.S.-AU relationship.

“The United States is a strong supporter of the African Union — an organization with 53 African states and over a billion citizens,” he said. The AU is “increasingly the institution that we turn to to help resolve some of Africa’s most intractable issues.” Lew said the United States is one of only two nations that have a dedicated ambassador to the African Union and is the largest supporter of the AU’s peace and security programs.

Lew called the African Union “an essential institution for defending our common principles of democracy and governance. The African Union’s courageous stance against unconstitutional changes in governments in Mauritania, Guinea, Niger and Madagascar deserve much praise. The members of the African Union have made a clear decision that the AU will not be a club for generals and dictators, and we applaud the strong steps the organization has taken in this regard.”

While cautioning that democracies are never perfect, Lew pledged that the United States stands ready to help any country striving to strengthen its own democratic institutions.

In addition, Lew told the delegation that the United States is counting on the AU to support its global health and food security initiative. The United States is also committed to working with Africa to help boost agricultural productivity, he said.

Lew echoed President Obama’s remarks during the president’s visit to Accra, Ghana, noting that Africa is a fundamental part of the interconnected world. He reiterated the Obama administration’s deep commitment to Africa and to fostering the development of institutions like the AU.

“We believe the pursuit of peace and prosperity in Africa is very directly in the interest of the United States and the American people, and finding ways to better support our shared objective will be the focus of our discussions,” he said.

Commission Chairperson Ping said his organization is convinced that Africa and the United States can easily design and build a 21st-century relationship based on shared values, mutual respect, confidence, commitment and partnership.

“Africa and the United States have had a long history of cooperation and are bound together by strong economic, social and cultural ties, but “such cooperation has been mainly at the bilateral level,” he said.

“Now it is clear that the world has been marked by tremendous changes, particularly globalization, the arrival of new players such as civil society, the advent of a new era of empowerment and, above all, the visibility and surge of regional organizations and groupings such as the African Union, the European Union and Mercosur [the Latin American trading bloc of countries].”

New threats have emerged, Lew said. Terrorism, the global financial crisis, piracy, illicit drugs and related problems, organized crime, criminal trafficking and climate change are all assuming greater prominence on the global agenda, he said, and no longer can be addressed by one country alone. “All of our threats to global security call for global solidarity,” he said.

Africa has a “duty and responsibility” to address its challenges, he said, particularly in the areas of poverty, underdevelopment, democratic governance, health, food security and conflict management.

Ping said the African Union Commission — which he chairs — is the body charged with executing the objectives and mission of the African Union. That, he said, ends with the dream of an independent and strong Africa in a position of comparative advantage vis-à-vis the world and a continent whose concerns are seriously solicited and considered worldwide.

The AU is pursuing four major objectives in its strategy for the continent, Ping said: peace and security; development; shared values; and institutional and human capacity building. He said progress has been made in all four areas.