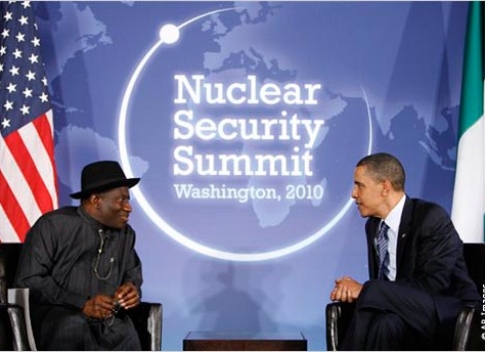 WASHINGTON–Nigerians in America have a message for Nigeria’s acting president: fix the electric power, end political corruption, get rid of the gigantic potholes in the roads, and distribute the money from oil revenues to the masses.

“You see some Nigerians have been here for 30 years, 20 years– they can’t go home, why?” asks Abiodun Ogunsanya. “Because the country is not good,” he answers.

Ogunsanya is one of the more than 150,000 Nigerians reported in the U.S. census in 2000. At his barbershop in Cheverly Md., Nigerians engage in passionate discussions about the affairs of their homeland. Many of them are simply fed up with the government and the lack of consistent electricity in Nigeria.

“I don’t know why we cannot have electricity in that country,” says Gbenga Ajayi, a music producer who has lived in Maryland for 5 years.  Ajayi flails his arms when he speaks. His words are met with shouts of agreement from men huddled together in the small Lagos Barber shop.

When Nigeria’s acting President Goodluck Jonathan traveled to the United States for the nuclear summit, Nigerians met him face to face to voice their concerns. It was his first visit since stepping in for Nigeria’s ailing head of state in February.

In a crowded room at the Hilton Washington Embassy Row Hotel, Jonathan answered several critical questions. One Nigerian-American stood and told the acting president what was on the minds of many.

“The first thing Nigeria needs to fix is light,” she said, “and every other development will follow.” After a round of clapping from the audience, Jonathan responded, paying homage to the high religiosity of Nigerian culture.

But Jonathan does not have a magic wand. And he doesn’t have much time either. Jonathan has about a year left  as acting president and Nigerians are holding him accountable to make the most of it.

“He has very limited time,” said Paschal Agubuzo, manager at a restaurant adjacent to the barber shop.“We Nigerians know the need to create a better economy in Nigeria.”

Chii Akpori, head of Communications and Knowledge Management at the World Bank, attended the event Wednesday hosted by the Center for Global Development. She said she was impressed with Jonathan’s speech. But, she says the government of her homeland needs to reach out to the masses.

“The attitude amongst a majority of Nigerians is that nobody in the government cares for me,” she said. “And we need to turn that around.”

Jonathan has a lot of plans for change, and he needs more than good luck to implement them. In his speech, he emphasized the need for a fair, transparent electoral process and for job creation.

President of the Center for Global Development, Nancy Birdsall pointed out the irony facing Nigeria. As the most populous nation in Africa, Nigeria is among the world’s ten largest oil producing nations. She said though Nigeria has made $300 billion in oil revenues since 1970, average incomes have remained the same for the past three decades.

“Despite Nigeria’s great wealth, too many Nigerians are still living in poverty,” Birdsall said.

And it’s the stark contrast between the rich and the poor, the inadequate infrastructure and the political instability that concerns Nigerians around the United States.

Back in the barber shop, Ogunsanya doesn’t hide his frustration. “The president cannot do everything by himself but we need to let him know,” he says waving his clippers. . “Say, no– we’re tired.”

Ogunsanya may be tired, but after closing the barber shop, he works the night shift as security guard in a DC office. He says that Nigeria’s problems are always on his mind and that he plans to move back someday.

Maybe Goodluck Jonathan can give him peace of mind.

Chika Oduah is a multimedia reporter and is currently a Master's degree student at the Medill School of Journalism at Northwestern University. As a native of Nigeria, Chika sees journalism as a way to empower the global audience and to inspire democratic change in Africa.