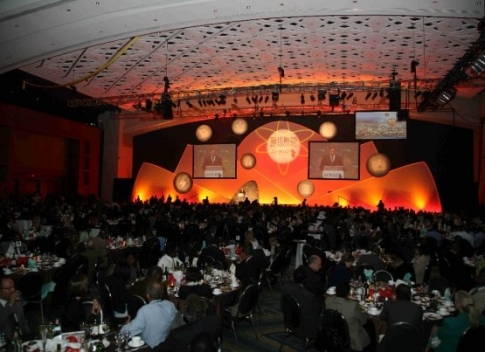 Although the infrastructure problems facing Africa look “daunting,” they are “not insurmountable,” U.S. Assistant Secretary of State for African Affairs Johnnie Carson said April 28, adding that infrastructure needs can be addressed by public and private partners worldwide.

Speaking to the fourth annual Corporate Council on Africa (CCA) U.S.-Africa Infrastructure Conference in Washington, Carson said, “Africa … cannot hope to close its development gap or to achieve middle-income status without addressing infrastructure as a fundamental impediment to trade, investment and growth. Poor road, rail and harbor infrastructure adds 30 to 40 percent to the cost of goods traded among African countries.”

As an example, Carson cited a recent report estimating that transportation inefficiencies amount to an export tax of 80 percent on Ugandan textiles, making it difficult for Ugandan businessmen to compete on the global market.

He added that deficits in telecommunications, electricity and water also present serious challenges to both domestic and overseas investors.

Carson said American companies clearly are interested in investing in Africa, but “when faced with the realities of doing business in many African countries, they ultimately decide to invest elsewhere.”

Infrastructure is only one piece of the overall investment climate picture, he added. “High customs fees, corruption, the absence of reliable legal systems, and burdensome regulatory environments … can discourage potential investors” as well.

“Doing business requires partners,” he said, “good, reliable and predictable partners” and in that regard, both African governments and American companies have responsibilities.

African governments must create a welcoming climate for investors and create a level playing field where businesses can run their operations efficiently without interference. American companies, for their part, must seek a greater understanding of the local markets and conditions. They should also make use of the services offered by the United States government, he added.

“To achieve strong economic growth in Africa, it is critical that we combine and pool our efforts to address the infrastructure deficit that is on the continent. The United States government,” he said, “is trying to do its part” having invested millions of dollars in new infrastructure projects through the U.S. Millennium Challenge Corporation (MCC) in several African countries.

In Cape Verde alone, he said, the United States is providing more than $70 million for road and bridge investments that are helping improve transportation links to the port city of Praia. Airport construction there also has been assisted by the United States government, he said.

In Lesotho, the United States is providing more than $164 million to support efforts to clean up the country’s water supply. “These projects are important,” he said, but cautioned that “they are really just a small drop in the bucket.”

Africa still needs billions of dollars for infrastructure development, and funding at that level, he said, can be generated only through public-private partnerships that bring international financial institutions, donors and the private sector together.

Carson saluted the CCA conference, which has as one of its themes “Building Dynamic Growth in Africa,” a policy objective “which we in Washington support and a policy objective that is absolutely essential if Africa is to move forward and to take its rightful place as one of the world’s great economies.”

As the world moves into the second decade of the 21st century, he said, “Africa stands out as the world’s last, great emerging market with 1 billion people spread across 53 nations in an area that is two times the size of the United States. Africa’s great potential and enormous promise are as vast as the continent is itself,” with reserves of oil and gas, uranium, diamonds, platinum, gold, manganese and iron, to mention just a few. The continent is also blessed with large pockets of arable land, major forests and vast water resources, he said.

“Combined with Africa’s enormous potential and capital, the ingredients and mixtures for Africa’s success are there.”

Carson saluted those African governments that have made wise economic and policy decisions over the past decade and used their wealth to turn their economies around “to slowly steer their countries out of the grip of poverty.” But, he added, four decades of poor economic decisionmaking by many African governments is still hampering the continent’s progress.

Despite the global economic crisis, Africa as a whole, has still been able to achieve an annual economic growth rate of 6 percent, he told his audience.

Carson also announced that the 2010 African Growth and Opportunity (AGOA) Forum, scheduled for the first week of August, will hold its plenary session in Washington, but will add a second segment in Kansas City, Missouri, to help African and U.S. businesses link up in a real business environment, especially in the area of agriculture.