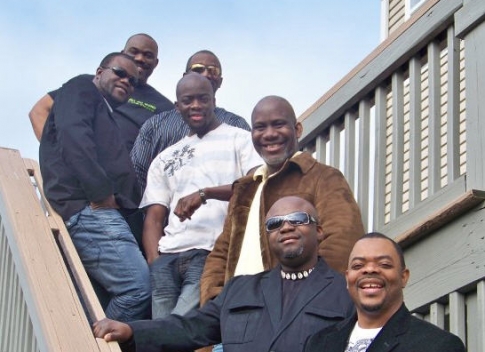 As we settled at our table, with drinks in hand, I couldn’t help but wonder what route the conversation would take. There was a lot I needed to know about Messiah’s Men if I was going to be working with them. I mentally prepared the questions I wanted to ask as I sat down with Trokon Guar. I had known Trokon for about a month, even though I had seen him perform with the group many times at my church.

I had the opportunity to meet all of the members of Messiah’s Men only two weeks prior to this meeting with Trokon and though it hasn’t been long, I’m learning a lot about each of them as individuals and how they work together as a group. With half of the group’s members living outside of Minnesota, it is quite interesting how they manage to work together and get things done.

Trokon, the brain behind the formation of this group, has a quiet air about him, but today, as he talked about Messiah’s Men, he literally opened up. You could see the excitement all over his face. It was immediately obvious how passionate he was about music and this group.

There is something about Messiah’s Men, something about the way they perform – together. Their confidence could easily be mistaken for arrogance, but take this from me, if you get to know them on a personal level and hear some of the things that truly matter to them, you would be amazed. They love music. Not only can they sing, they can perform. They’re passionate about what they do and it shows, both on and off stage.

Trokon, Barchue, Samuel and Dehcontee are all brothers. What I thought was interesting was they did not sing together growing up even though they all loved music. At different times they sang, either alone or performed with other groups. During the war in Liberia, while in the Ivory Coast and Ghana, they sang together once in a while, when the opportunity came up. A huge grin broke across Trokon’s face as he talked about life in Ghana as refugees. He remembered there were days they did not have much to eat, but were happy to get together and sing. They would get up as early as five in the morning, go outside, and sing their hearts out.

All of the songs they sang together as a group were songs by Acappella great, Keith Lancaster. Little did they know that they would actually meet Keith, and his entire family, a number of years later in Nashville, TN. Little did they know that Keith Lancaster would stop an entire teaching session and give them the platform to perform in front of a room full of other Acappella groups from around the world!

As I sat there, sipping on a warm cup of apple cider and listened as Trokon told me stories of the group, I couldn’t help but smile myself. Over and over in my mind I’m thinking, people out there need to hear this story. Every story that comes out of Liberia is about the war and subsequent suffering of the Liberian people. This is understandable, but there is so much more to Liberia than what happened to our country during the war. We are a strong, beautiful, well rounded people in so many regards and music has always played a major part in what makes us so unique. We can not discount that. Messiah’s Men has a fresh, new perspective – a new story to tell.

As we discussed upcoming events, I was eager to hear how the Mother’s Day event got started, since this is the second year the group is actually doing this. Trokon paused for a second and then smiled as he started to tell me about his own mother, Nancy Beatrice Guar. This was a beautiful story of a strong and extremely supportive woman, who, for as long as her sons can remember, opened her home to everyone and would give selflessly to ensure that someone else would have a meal to eat or a place to stay. She was excited about her sons’ accomplishments with Messiah’s Men and would drive with her husband to see them perform.

Even though all the men in the group were not her biological sons, she treated them as though they were. She almost never took their first album out of her CD player, Trokon remembers. Beatrice would listen to it over and over again. In 2006, when she passed away, they placed a CD in her casket and made a promise to her that they would stick together no matter what. It was by God’s grace and this promise to their mom that they were able to survive one of their most challenging times, when the group was on the verge of calling it quits. To honor the memory of their mother, the guys decided to recognize and honor other mothers on Mother’s Day for all that they do for their families and communities.

The current members of Messiah’s Men, except for the brothers, are from varied backgrounds and all have one thing in common – they have loved music and sang all of their lives. David Wilson plays the keyboard and Directs the Music Ministry at Bethel World Outreach Church in Minnesota. Lester Manley, who is also a minister of the Gospel, plays the Saxophone. For the past 20 years, Claudel St. Jean has served as a Music Minister in several different ministries in the U.S. and Africa.  Samuel Mappy, Jr., who serves as the group’s musical director, sang with the Ivorian National Mass Choir, NEMCOL. Matthew Benson, currently sings baritone, believes that music is a means of communication that helped him get through the trauma of the civil war in Liberia. Looking at the guys now, it is hard to tell that they haven’t all sang together for a long, long time.

Today, Messiah’s Men have been blessed in so many regards and one thing Trokon pointed out was that every time they made a donation to an organization or person in need, they have received from others in return. The opportunity to give back is a huge reason they do what they do.

This year Messiah’s Men have a lot on their plates, and they are excited. They have added a manager to their team. Becky Moore brings diversity, a wealth of knowledge and passion to the group. Also this year, on May 15th, they will be honoring mothers at their annual Mother’s Day celebration.

The event will be an evening to remember; an evening of honoring and showing appreciation to women who have given so much of themselves, not only to their families, but to their communities as well. The Men will not only be serenading mothers with songs, but they will also be serving them dinner – yes, decked out in aprons and all. Three special moms, nominated by the general public, will be honored during the event. (To nominate a mom, visit www.messiahsmen.com).

Later this summer, Messiah’s Men will be releasing their third album, Full Circle. They have poured a lot of who they are, where they have come from and their experiences into this project and are excited about sharing it with their fans.

In December, The Men along with Keith Lancaster and the original members of Acappella and Durant will be on the road! Destination: Ghana & Liberia. Proceeds from the concert in Ghana will go towards a well project they have undertaken. The Backpack Project in Liberia will benefit elementary and middle school children. Messiah’s Men is always excited about giving back because it reminds them of where they have come from and how blessed they are.

Indeed, by God’s grace, Messiah’s Men has come full circle. Their love for God, for humanity and for music keeps them grounded, dedicated and excited about what they do. It is love that keeps them harmonizing those voices to God’s glory!!