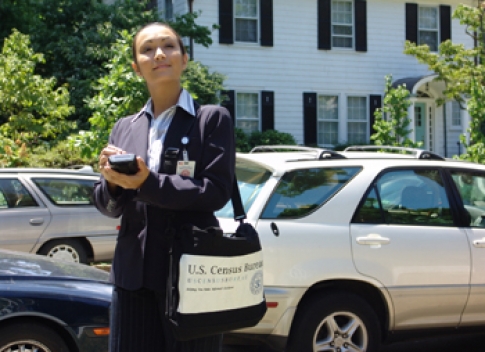 Like President Obama, I completed my 2010 U.S. Census form. Unlike the president, I did not answer “Question 5 – Race,” by checking “Black, African American, or Negro,” even though, like the chief executive’s, my mother was “White.”

These queries were so illogical I’d let the Census form gather dust. I hoped it would spontaneously combust and take “IRS 2009 – 1040 Instructions: Including Instructions for Schedules A, B, C, D, E, F, J, and SE” with it.

Finally, inspired by Mr. Obama’s example – despite being ill-prepared at Harvard Law School and the U.S. Senate he is doing his best – I began. After all, the form advised that “Census results are used to decide the number of representatives each state has in the U.S. Congress.” I wanted to help make sure Virginia was not slighted.

I gave my name, birth date, address and number of Homo sapiens dwelling with me. I also answered that I owned rather than rented, there being no “Unsecured Collateralized Debt Obligation” box to check.

I even wanted to inform the government about Bella. However, though pets are as important as human roommates to many Americans, the Census Bureau appeared completely unconcerned about them as vital statistics.

Then came Question 4. I could have answered “No” in response to the “Hispanic, Latino or Spanish origin?” query but the undefined and overlapping sub-choices under “Yes” caused my temples to throb.

They included not only “Mexican, Mexican-American, Chicano, Puerto Rican and Cuban” but also “another Hispanic, Latino or Spanish origin, for example: Argentinian, Colombian, Dominican, Nicaraguan, Salvadoran, Spaniard, and so on.”

“And so on?” That’s a Census category?

Why Dominican but not Haitian? Because the Haitian half of the island of Santo Domingo is largely French-Creole, not Spanish-speaking and of “Black” or “Negro” but not “African American” origin? Maybe Haitians fall under “and so on”? “Hello, I’m from Port-au-Prince. I’m an and so on.”

And why are we counting Spaniards? Aren’t they citizens of Spain, and therefore Europeans, not Latinos? By the way, shouldn’t it be “Argentine,” not “Argentinian”?

Beyond grammar, what is Question 4 about – nationality, language, culture or citizenship? If not the last, what’s it doing on the Census, the only constitutional (Article I, Section 2) purpose of which is to determine population for apportioning seats in the U.S. House of Representatives?

Having given up at Question 4, I couldn’t very well answer 5. The Census Bureau’s prompt on race — “Black, African American, African,” “White,” “Other” – said to include, for example, “American Indian or Alaska Native (print name of enrolled or principal tribe), Native Hawaiian, Other Pacific Islander, Filipino, Korean, Vietnamese, Pakistani, Samoan” – was maddening. Samoan is a race? Distinct from also-listed Fijian and Tongan? Who knew?

When I was a child, there were said to be four races. Politely, these were described as Caucasian, Negroid, Oriental and Indian (American, not Asian); impolitely as white, black, yellow and red.

But even as children, we realized these categories weren’t precise, that some dark-skinned whites appeared about the same color as light-complected blacks and Indians were not at all red, let alone Chinese yellow.

Years later, when a neighbor – an amiable if non-shaving feminist graduate student (human sexuality was her field, I was a passing experiment) – insisted that “race is a social construct,” I knew just what she meant: Race was highly cosmetic and deeply political. Like feminism.

I’d no sooner mailed my incomplete Census Form than newspapers headlined “Great-grandma was a Neanderthal.” Turns out DNA tests indicate that modern human beings and Neanderthals interbred between 100,000 and 80,000 years ago.

This was before Homo sapiens – originally Africans all – diversified through chance and natural selection into today’s ethnic (sub-racial) groups. Many women insist otherwise, but science says Neanderthals died out around 30,000 years ago. Regardless, the study shows they bequeathed to non-Africans one to four percent of their genes.

When the 2020 Census Form arrives, I’ll be ready. Race? “Other: Principal tribe, homo sapiens; minor tribe, Neanderthal.” I believe this means I will qualify to vote in both Virginia and Maryland.

Eric Rozenman is a news media analyst in Washington, D.C.